Leave it to The New York Times (The Times) to publish a 1,000-plus-word story on the failed state of Venezuela’s collapsing oil sector without saying anything about socialism. 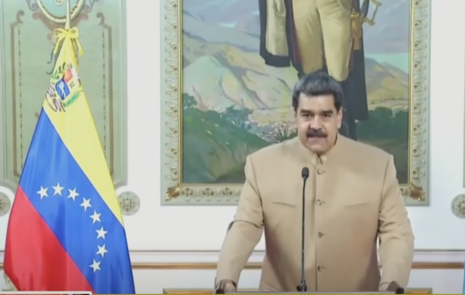 In the story headlined “Venezuela, Once an Oil Giant, Reaches the End of an Era,” The Times blamed America and made it appear that the Venezuelan oil sector was imploding due simply to “gross mismanagement.” “Venezuela’s colossal oil sector, which shaped the country and the international energy market for a century, has come to a near halt, with production reduced to a trickle by years of gross mismanagement and American sanctions,” The Times said.

The 1,563-word essay even mentioned that “The collapse is leaving behind a destroyed economy and a devastated environment, and, many analysts say, bringing to an end the era of Venezuela as an energy powerhouse.” But nowhere in the long article is the word “socialism” even mentioned or blamed. Apparently, that’s become taboo for the left-wing Times.

What makes this even worse is that Times Op-Ed columnist Bret Stephens had written a piece just last year headlined, “Yes, Venezuela Is a Socialist Catastrophe.” In a Feb. 28 article, The Times literally wrote that “Faced with a severe economic crisis, the country’s leader, Nicolás Maduro, is letting foreign firms take over daily operations of its oil fields. It’s a break with core tenets of his socialist revolution.” [Emphasis added.] Why did the liberal paper avoid mentioning socialism now?

Stossel TV host John Stossel blasted the obvious omission on Twitter: ⁦”@nytimes does LONG story on Venezuela becoming even poorer than Haiti… without once mentioning socialism.” 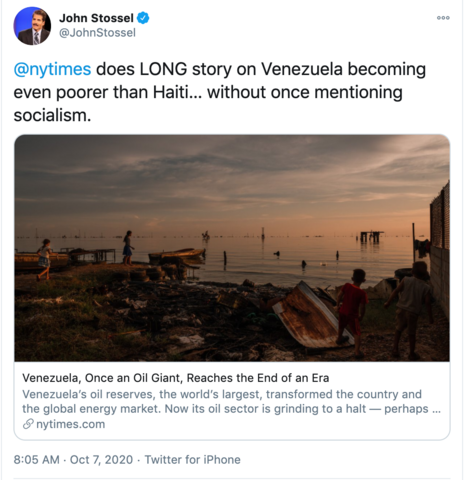 The irony is that The Times even noted that Venezuela “was the largest [oil] producer in Latin America” a decade ago, without mentioning anything about Venezuelan socialism being a major factor in destroying that status. Even more bold-faced, The Times mentioned Venezuela’s dictator Nicolás Maduro six times throughout the article, without ever once mentioning that he’s a socialist. His predecessor, dictator Hugo Chávez was mentioned three times, also without ever mentioning that he too was a socialist.

Wall Street Journal Chief Economics Commentator Greg Ip wrote in 2019 that “Soaring oil revenue in the 2000s enabled Mr. Chávez to embark on a sweeping nationalization of the economy.” He continued: “When oil revenue fell because of mismanagement and falling prices, the government forced the central bank to print money to finance its spending, resulting in hyperinflation and the current economic collapse.”

According to Ip, Venezuela’s “socialism, which was heavily influenced by Cuban communism, isn’t just a disaster; it’s unique. Despite the region’s long history of left-wing populism, no Latin American country has since followed Venezuela’s path.” This makes it all the more egregious that The Times decided to leave any mention of the word “socialism” or related labels out of its analysis.

Conservatives are under attack. Contact The New York Times at 800-698-4637 and demand it update its 1,563-word Venezuelan oil crash story to mention socialism.