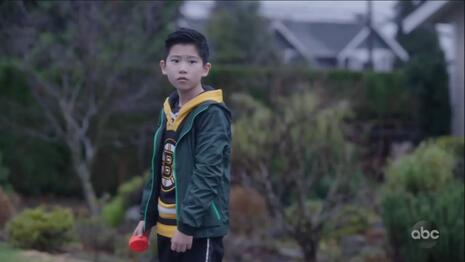 Thursday’s episode of A Million Little Things was so heavy-handed in pushing the latest cause-de-jour (“Stop APPI Hate”) that the entire episode played out more like one giant PSA on a supposed “epidemic” of hate and violence towards Asian Americans, with whites and Trump to blame, of course, despite strong evidence to the contrary.

In “The Price of Admission,” Asian character Kathryn (Grace Park) walks into her son Theo’s (Tristan Byon) bedroom to find him sitting at his computer wearing a mask while being taught via distance learning. A white, male classmate (because, of course) named Conner told Theo that if he doesn’t wear his mask, he’s going to make everyone in the class sick. Theo naively believes him until Kathryn tells him it’s not true and demands he take his mask off.

Kathryn complains to Theo’s father Eddie (David Gluntoli) that it happened because Theo is Asian, despite having absolutely no evidence to support her assumption other than the need to advance an agenda. When Eddie asks if she’s sure, she goes even further, saying, “Yes, I’m sure. [Conner] probably heard it at home.” She adds, “I mean, his [Theo’s] whole life, we’ve been trying to protect him from what’s going on in the world, and now it’s coming right into his bedroom.”

In the real world it could just be an innocent case of boys playing tricks on each other, or just a general bully who likes to pick on anyone and wanted to make Theo look dumb for believing he’d need to wear a mask inside of his own home because he could get people sick over the Internet. In Hollywood, it’s an obvious hate crime.

Later in the show, Theo is exposed to a very clear-cut incident of blatant and ignorant racism as his white, male, adult neighbor yells at him to get off of his lawn because he’s afraid Theo’s carrying the “China virus,” a scene which we’d all expect to see in a liberal Boston neighborhood. /sarcasm

Just before the incident, however, there’s a victim bonding moment between Kathryn and her lawyer friend Alan (Terry Chen) who is also Asian, in which they discuss having to be the “model minority,” a scene that fits right into the trendy BLM and Critical Race Theory agendas:

Alan: When I think back to when I was Theo’s age, the number of Kung Fu Jackie Chan jokes I heard — my own classmates mimicking my parents’ accents behind their backs. I may not have known exactly what it was then, but it still hurt.

Kathryn: Did you ever talk to your parents about any of this stuff?

Alan: No. They risked so much moving their lives here so I could have a good education, just for me to come along and, what, complain about a couple jokes? I couldn’t bother them with that. Those weren’t real problems. I can still hear my dad’s words — “Don’t cause trouble. Just fit in.”

Kathryn: You know, my dad owned a doughnut shop, and one morning he came in, and he found a slur written on the window.

Alan: Did he call the police?

Kathryn: No, he just got a bucket and some water, and he washed it off. He just felt like he had to take it, you know, like somehow it was the price of admission for coming to this country.

Alan: And it hasn’t gotten any easier. It’s one of the reasons why I do my pro Bono work in Immigration Law.

Kathryn: I know our parents did their best, but I have to do better. I don’t want Theo to have to pay the same price.

Alan: Well, then maybe it’s doing what our parents never did. Talk to him about it.

Neighbor: Hey! Get out of my yard! I don’t want that China virus around here.

This was an obvious jab at Trump for initially referring to COVID-19 as the “China virus,” which the left believes is the cause for the supposed uptick in violence towards Asians, despite the media also repeatedly calling it the “Wuhan” or “Chinese Coronavirus.” Yet, Trump simply called it the “China virus” because that’s where it originated, just like West Nile virus, Spanish Flu, Ebola, Zika, Lyme and Middle East Respiratory Syndrome (MERS) were all named for their place of origin.

In response to the neighbor’s hateful remark, Eddie ends up vandalizing the neighbor’s car, a scene which Theo witnesses and is greatly disturbed by. This leads black character Rome (Romany Malco) to bond with Theo over their shared victimhood as Rome seeks to comfort him with his own story about a white classmate and, this time, police are to blame. Apparently, you can fit a lot of liberal talking points and blame into a one-hour drama:

Rome: Hey, little man. What are you doing here? I heard your dad Hulked out on the car next door.

Theo: Yeah. Neighbor said something bad, and… He just got so angry. I’ve never seen him like that.

Rome: Can I tell you a story? When I was about your age, there was a kid in my class — Adam Reynolds. White kid. He’d always pick on me. One day, Adam wanted to start a fight, so he socked me right in the jaw. Pow! So, I defend myself. One thing led to another, and we end up in the principal’s office. And, well, the principal — he called the police before he called our parents. So, by the time my dad got down to the school, I was in handcuffs, Adam wasn’t. I’d never seen my dad so mad. He just started shouting at the cops, man. He was like, “You take those cuffs off of my son! He’s 12 years old, and you’re trying to give him a criminal record!” Just kept shouting. Cop didn’t like that. Next thing you know, they take the cuffs off me. They put them on my dad. My mom had to go and bail him out. Seeing my dad that angry was scary. And I never understood why he reacted that way until I got older and asked him about it. And that’s when he told me — “The system treats people who look like us differently. And once you’re in the system, it’s really hard to get out. So, I did what I had to do to keep you out, son.” What I’m trying to say is, my dad did that to protect me from something that I didn’t understand yet. Sometimes our parents — they do things that we don’t understand.

As if that wasn’t enough, the show literally ended with a PSA by the actors who play Kathryn, Theo and Alan:

Tristan: In tonight’s episode, my character was subjected to anti-Asian hate speech.

Grace: While the story was fictional, since the beginning of the pandemic, there’s been a drastic rise in violence against Asian Americans.

Terry: If you’ve been targeted or have witnessed a hate crime, please report it to stopaapihate.org.

Tristan: Now more than ever, we have to look out for each other.

Any crimes committed against anyone, because of their race or otherwise, should of course be roundly condemned, but this episode pushed a damaging false racial narrative.

If you thought the show couldn’t possibly insert anymore liberal talking points, we got a teaser at the end about a character hiding from child protective services because his mother was arrested by ICE for being in the country illegally. Can’t wait to see how that one plays out!

Conservatives Fight Back! This episode was sponsored by T-Mobile, Toyota and Home Depot. Click each advertiser for their contact information so that you can let them know how you feel about this episode!