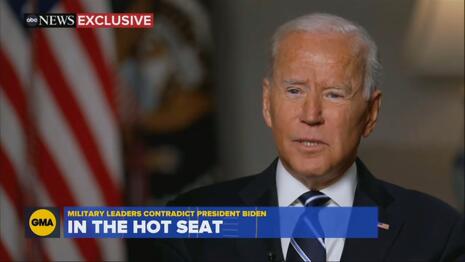 The Biden presidency continues to crumble and media outlets are doing their best to hide the collapse. ABC commissioned a poll on the Democrat’s job performance, but only allowed a scant 87 seconds to the terrible results on Wednesday. And while the bad news was plentiful in the survey, Good Morning America’s George Stephanopoulos and Terry Moran only picked out one part of the woeful results.

Stephanopoulos brought up Afghanistan and noted that the botched withdrawal has “taken a toll on the President’s numbers.” Moran agreed: “Our most recent ABC News poll shows that 61 percent of the American people disapprove of his handling of Afghanistan, only 38 percent approve. Those numbers are down with Democrats and independents, of course, Republicans as well.”

But Afghanistan is only the beginning of Biden’s troubles, according to ABC’s own poll. The journalists ignored how badly the President is doing on gun violence and immigration (where Biden is polling in the 30s). Here’s some of the results they didn’t report in the 87 second story: 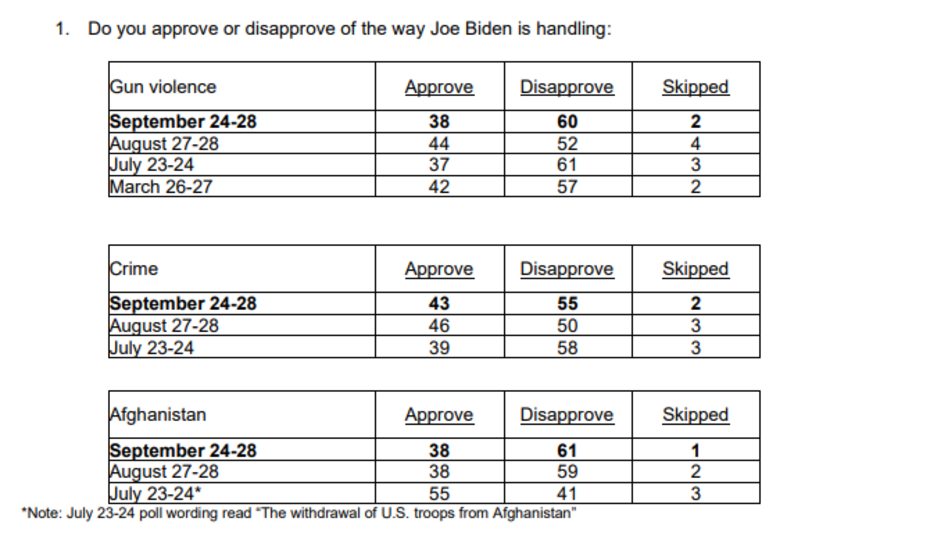 Oddly, the ABC poll didn’t include a question on overall approval.

It’s not just ABC’s own survey. The new Economist/YouGov poll has Biden at 43 percent. Rasmussen at 42 percent. But these numbers are being ignored by journalists. Now, to his credit, ABC’s Moran on Tuesday night and Wednesday morning did hit the Democrat for lying about what the generals told him. In a clip played on Tuesday’s World News Tonight, Moran confronted White House Press Secretary Jen Psaki:

The President said his military commanders were split. We now know that the Chairman of the Joint Chiefs of staff, General Milley, head of Centcom, and the commander on the ground, General Miller, all recommended the president keep 2,500 troops So, who in his military advisers told him it would be fine to pull everybody out?

The minimizing of ABC’s own poll was sponsored by Lincoln and Kohls. Click on the link to let them know what you think.

A transcript of the GMA segment is below. Click “expand” to read more.

GEORGE STEPHANOPOULOS: President Biden dealing with the fallout of yesterday’s testimony as a new poll shows eroding support for the President. Senior National correspondent Terry Moran is tracking that from the White House, good morning, Terry.

TERRY MORAN: Good morning, George. The White House is in damage control mode and pushing back hard on the accusation that President Biden lied in his interview with you about the military advice he received on Afghanistan. Press Secretary Jen Psaki saying there were other military advisers who supported the President’s decision to withdraw all U.S. forces. When I asked her who those advisers were, she wouldn’t say. But she did emphasize that the President was heeding other warnings about what would happen if the U.S. left a residual force of troops in Afghanistan. They would inevitably come under attack from the Taliban requiring more troops to be sent in. And rather than ending the war it would prolong it. The White House insisting as commander in chief, the President was determined to end the war and that that was the right decision.

STEPHANOPOULOS: There’s no question, Terry, this whole episode has taken a toll on the President’s poll numbers.

MORAN: Absolutely. It is battering his public support. Our most recent ABC News poll shows that 61 percent of the American people disapprove of his handling of Afghanistan, only 38 percent approve. Those numbers are down with Democrats and independents, of course, Republicans as well. And they have completely flipped since July, since before the chaotic evacuation from Afghanistan. All coming at this critical moment in his presidency. This issue dragging him down. George?

STEPHANOPOULOS: Terry Moran, thanks very much.