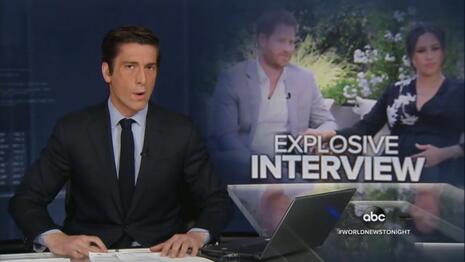 With two new accusers speaking out and accusing New York Governor Andrew Cuomo (D) of sexually harassing them over the weekend, ABC’s World News Tonight refused to give the story any consideration Monday evening as they spent almost five minutes (4:52) on the British royal family’s drama dished to Oprah Winfrey.

Meanwhile, CBS Evening News dropped any mention of Cuomo’s nursing home deaths and cover-up scandals which were reportedly being investigated by the FBI. Instead, they spent two minutes and 33 seconds gawking at former royals Meghan Markle, Harry Windsor, and their interview with Oprah. And while the network did report on Cuomo’s latest accusers, they gave it less time than the royals at one minute and 59 seconds.

Over on NBC Nightly News, there was a similar disparity. The network spent only one minute and 50 seconds on Cuomo’s different scandals, with just six seconds of that total for the nursing home scandal. As for the royals, the network gave them two minutes and 42 seconds.

The evening newscasts’ preference for glorified daytime TV drama came after the morning newscasts spent over 91 minutes (91:25) on the royal family’s nonsense. And as NewsBusters’ Curtis Houck reported, CBS had spent 71.5 percent of their total morning airtime on the spectacle and shelled out $7 million to get the whiny couple to speak to them.

These findings were also similar to another recent NewsBusters study that found the evening newscasts were smothering Cuomo’s nursing home scandal. In nearly 10 months, the networks gave only 15 minutes and 35 seconds to the nursing home deaths and cover-up. In contrast, in 11 days they gave the sexual harassment scandals 44 minutes and 14 seconds after ignoring his first accuser back in December.

And although Thompson noted the federal nursing home investigation, she tried to spin weak calls from Democratic leaders for an investigation into the harassment allegations as strong stands against the embattled governor:

THOMPSON: Even on the national stage, there’s no defense of Cuomo. From a current senator.

SEN. CHUCK SCHUMER: The allegations from each of these women are serious.

THOMPSON: And a former one.

HILLARY CLINTON: I’m very confident that the attorney general will conduct an independent, comprehensive investigation. And I think we should all wait to see what those results are.

The allegations and the royal family provided the perfect cover to ignore Cuomo’s decisions regarding nursing homes during the pandemic. The same decisions many other Democratic governors made.

ABC’s omission of Governor Cuomo’s scandals was made possible because of lucrative sponsorships from Care.com and Fisher Investments. Their contact information is linked so you can tell them about the biased news they fund.