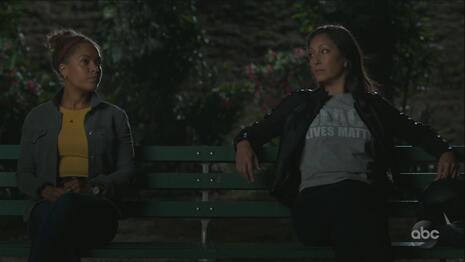 Is it too much to ask that a primetime network show just entertain us without some random social justice message popping up on the screen? This is 2020 and apparently the answer is yes.

The second episode of season four of ABC’s The Good Doctor aired on November 9. Titled “Frontline Part 2”, one of the show’s storylines included two female doctors grieving the death of a doctor with whom both woman had an intimate relationship.

One is the Chief of Surgery, Dr. Audrey Lim (Christina Chang), and the other is Dr. Claire Brown (Antonia Thomas). The two women have a friendship and comfort each other on the loss of Dr. Neil Melendez.

The women end up on a bench they often come to for some quiet time just outside of the hospital building. This evening there was a random message on the t-shirt under Dr. Lim’s coat. The t-shirt reads “Black Lives Matter”.

Dr. Brown: Are you okay if… M-maybe it’s time we stopped coming here.

Dr. Brown: No. But he’ll still be with us, right? Wherever we are. He changed me. That’s not gonna go away.

It is a shame that the episode ended with such a message endorsing a radical Marxist organization. The episode was really quite good. I was moved to tears a couple of times as the patients and doctors struggled throughout the show. There were no political conversations or any reason to bust out a political slogan, but there it was.