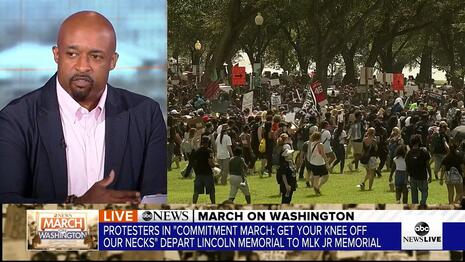 ABC Live’s coverage of the March on Washington Friday afternoon in D.C. was full of emotionally-charged, partisan and divisive rhetoric attacking law enforcement and President Trump as racists. It probably shouldn’t come as a surprise then that two of ABC’s contributors blatantly lied along the way, without any pushback or corrections from the ABC journalists present.

YVETTE SIMPSON:  We have to be honest. We have to have an honest conversation about what we’re saying. And when your president can’t say “black lives matter,” when the entire country is saying black lives matter, when he speaks for 76 minutes and does not invoke the name of the young man who was murdered, but then talks about the quote/unquote violence that’s happening as a result of that…

… You see DC in two different lights. You see a closed event, 1,500 to 2,000 people, no one is wearing masks, nobody is social distancing. They’re talking about an America that feels very small and very limited. I heard the words of the speakers this week and I remarked I love the America they’re talking about, I wish they were talking to me. I want to be free, too. I want to live in a world free from oppression, I want to have control over my body and make my own choices. But they’re not talking to me, at least I don’t feel like and they’re certainly not listening to me. That’s the big disconnect with the Republican party, they make decisions about women in a room full of men. They make decisions about black people and don’t even take a moment to ask us what we think. The Trump administration is talking about the gift that he is to black people, but his administration is starkly white, starkly male. What we’re saying is listen to us. We know what we need. Please, we want to live. That is a very simple demand, basic human right that should be guaranteed to any person regardless of who they are…

Excusing the typical partisan attacks, the bald-faced lies from Simpson should’ve been called out by the ABC journalists present. President Trump has said “black lives matter,” but ABC let Kamala Harris lie about this too. Simpson’s comment about having a starkly male administration is false too: Half of Trump’s staff are women.

Fellow panelist, Nightline co-host Byron Pitts, went on to compare black Americans killed in police encounters being named in the speeches to victims of the 9/11 terrorist attacks: “It reminds me, listening here in New York, the 9/11 memorial service every year, that family members line up and just say the names of the loved ones they’ve lost.”

Good Morning America co-anchor T.J. Holmes was also there to fan the flames of racial hostility, saying black people like him “need collective therapy” and are just asking for police to “stop killing us,” (click “expand”):

TJ HOLMES:  We were watching this and you hear people shouting out to the speaker, oh, this name, that name. It just keeps coming and coming and coming. And we talk about the black lives matter movement and we see these shootings and these deaths….it’s one thing for the black lives matter movement to just say stop shooting us and killing us. But then you have to deal with the additional pain of being reminded of just how much your life doesn’t matter because it’s not worth convicting or even charging the person that took that life.

I’m a young black man and I know these are my friends, these are my neighborhoods, but to see yourself and somebody that looks like you being gunned down every single day almost on television, to see that and go through that, there’s a trauma. I’ve heard people talk about this, we need a collective therapy as black folks in this country.

We keep going to Congress, we keep going to the President of the United States, but we don’t see any change. T.J. just mentioned in the backdrop, Jacob Blake just died when this march was already planned. So to keep saying leave it to Congress, that’s not working. To say just vote, that’s not working, because black people are still getting killed every week. So what do we do?This is the frustration that you’re seeing. That energy on the street is frustration. When you see the frustration, the looting, and the anger, they don’t know where to go. Right? Where do you put this pent-up energy at?

PBS White House correspondent Yamiche Alcindor also lied about this a few days ago as well. No one corrected Muse.

There were other moments of hypocrisy. As you saw Simpson above complaining about the RNC and COVID risks, GMA’s Cecilia Vega was proud of the protesters flouting social distancing guidelines to protest:

VEGA: I’m struck by — we’re 67 days out from our presidential election, and — and tens of thousand of people were willing to risk the possibility of COVID to go out there and have their voices heard today. That is a very, very powerful statement from the individual stories but to the collective of all of these people out there, that is a moment, an image that will stick with me.

It shouldn’t be any surprise that just hours before GMA was bashing Republicans for not having a socially distanced crowd of supporters present for President Trump’s acceptance speech last night.