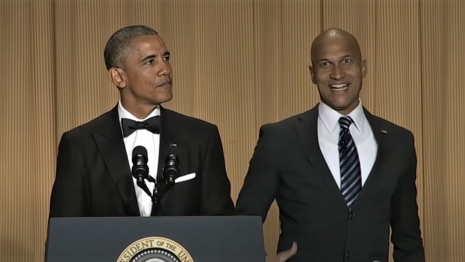 Political comedy took a knee when Barack Obama moved into the Oval Office.

In a way the jitters were understandable. Poking fun at the first black president, at least initially, took a master’s touch. One false syllable and cries of “racist!” might be heard from sea to shining sea.

Still, after a while, President Obama became just another world leader. In theory, that meant political humor was back.

Sadly, comedians kept holding their fire. That was particularly true for Saturday Night Live. The comic tasked with playing Obama for SNL, Jay Pharoah, admitted the iconic show eventually “gave up on the Obama thing.”

We saw it for ourselves, but it’s interesting to get an insider’s point of view.

Comedians clearly supported President Obama and didn’t want a comic narrative to build against him. They saw what happened when Tina Fey mocked Gov. Sarah Palin so mercilessly during the 2008 presidential campaign, and they couldn’t risk a repeat against their own party.

So they created what they figured was a bullet proof defense for their dereliction of duty.

Obama was too cool, smart and slick to be mocked.

“We’re helpless,” they cried. Some comedians even reconfigured their acts to praise him, targeting his enemies instead.

It was a lie, of course. Anyone is fair game for humor, even if some presidents are more mockable than others. In a way, President Donald Trump is too easy to lampoon, something we’ve seen over the past four years.

Adam Carolla reminded us of Obama’s Achilles’ heel this week. The podcast giant and former Loveline host tweaked the former president as Obama did the press rounds for his latest memoir, A Promised Land. The tome clocks in at well north of 600 pages, and it only captures part of his presidency.

Obama’s ego is huge, and yet comedians shied away from it for eight long years.

They looked away as Obama mentioned himself again, and again, in speech after speech. Conservatives took him to task for his outsized sense of self. Professional satirists, for the most part, ignored the obvious comic hook. Not Carolla.

The podcaster appeared on Tucker Carlson’s blockbuster Fox News show recently and both host and guest teed off on Obama.

Obama is now in the process of writing a third memoir, which will detail the later part of his presidency. It will be released sometime in the next few years.

“I was only able to listen to the first 17 hours on the toilet this morning,” he joked.

Need more proof of Obama’s ego? The former President gifted an iPod loaded with his speeches and photographs to Queen Elizabeth. He hunkered down with salivating sports reporters each March to share his all-important NCAA Bracket.

When George Zimmerman killed black teenager Trayvon Martin after a hotly disputed brawl Obama noted if he had had a son he would have looked like young Martin.

Who says things like that? More importantly, how did political humorists miss the oh, so obvious flaw in Obama’s perfectly coiffed image?

Easy. They weren’t looking. It’s a preview to how comics will approach President Kamala Harris in the years, if not months, to come.