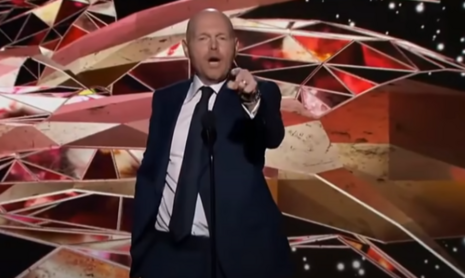 Jokes aren’t funny! Certainly not when a “cis white male” makes them. Bill Burr forgot that rule at the Grammys, earning him a starring role in today’s episode of Cancel Culture.

Stand-up comedian Bill Burr presented at the 2021 Grammys premiere ceremony Sunday afternoon ahead of the official Grammy Awards telecast. His job was to announce the winners of a few diversity-centered awards including the best regional Mexican music award and the best tropical Latin album award. As he is a comedian, he presented the awards with a humorous take yet, the twittersphere was still triggered.

He started out his presentation with his notorious humor when he said, “Was I the only one that wanted to kill himself during that piano solo? I bought a suit for this, I thought I was going to be on TV. I’m such a moron. I am losing so much money right now.”

Burr kept up the comedy when presenting an award to Mexican pop-rock and folk singer songwriter Natalia Lafourcade for winning best regional Mexican music. During the ceremony Burr said, “I can’t say this name. Natalie what? … the Grammy goes to Natalia Lafourcade. I will accept on behalf of her. If I butchered her name, I’m sorry. Natalia, you won.”

Then, when presenting the award for the best tropical Latin album he said, “feminists are going nuts, ‘Why is this cis-white male doing all this Latino stuff.’”

The social-media reaction and internet trolls were divided on his comic performance. While some users thought he was funny, others users called him (what else?) a racist. One user, however, pointed out that he is married to a black woman and therefore canceling him for racism seems ridiculous.

Clayburn Griffin took it way too far when he didn’t “suggest” but rather insinuated that Burr was racist because of his non-white wife. He commented on one user’s defense for Burr who shared a picture of the happily married couple. In response, Griffin then called Burr’s married wife a “sex servant” and claimed that she was owned by her husband.

While I’m not suggesting Bill Burr is a racist, a white man having a non-white wife can sometimes be a sign of racism. So you shouldn’t assume someone isn’t racist just because they own a minority sex servant. They may very well have one because they’re racist.

Is this guy serious? Apparently if you are a white male and you marry a black female, you’re not only racist but also “own a minority sex servant.” What a degenerate comment.

Though Burr doesn’t seem to care about the antics of the cancel vultures, he did have many users who came to his defense as well as some that were just fed up with the ridiculousness of the situation.

Bill Burr is one of the top comedians in the world right now and for one simple reason—most of the other guys like Jimmy Fallon and Trevor Noah are too cowardly to do politically incorrect stuff. So Burr and one or two others have the field pretty much to themselves #BillBurr

Bill Burr is a living legend. Go cancel yourselves.

Unfortunately for Burr, this isn’t the first time the Twitter mob has come after him. Most recently, Burr has been under fire for his support of actress and former MMA fighter Gina Carano who was canceled over her outward conservatism which, in the wake of the wokies, is totally unwoke.

But, Burr is a professional comedian. Was it really that surprising that he cracked jokes at the Grammys?

The gross part is, Burr is getting a slew of criticism for making a joke but Cardi B. and Megan Thee Stallion were allowed to twerk to “WAP” with their butt cheeks hanging out during the Grammy Awards. Maybe he should have brought out a stripper pole and given an x-rated performance too. Of course that’s what the internet praises.

Social justice warriors, or rather bored internet trolls, are entertained by nit-picking anything and everything on the radar of cancellation. At least Burr will probably just laugh this off since it is quite literally a joke.