All Hat, No Cattle: Dez Bryant Slams Kaepernick For Not Doing More 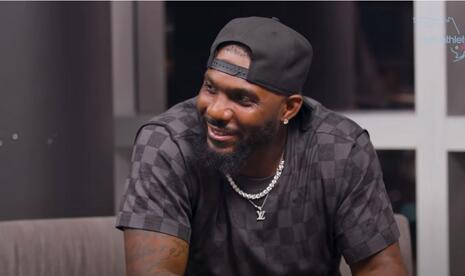 Colin Kaepernick is all hat and no cattle. The opinion of Donald Trump? No – this is the rap he’s getting from ex-Dallas Cowboys star Dez Bryant, currently a free agent. Former NFL quarterback and malcontent Kaepernick, who in 2016 protested his way out of a football career, had no call to action and offered no solutions to perceived societal problems, Bryant said during an “I Am Athlete” podcast interview.

Bryant (seen in photo) said he respects Kaepernick, who wants a future without police and the terror of prisons. With one exception:

“I love him to death, it ain’t no hate or nothing like that. But, brother, you had the biggest opportunity in the world to create jobs, to build jobs, to give jobs to people. The people you were talking about. The people that you were so-called ‘standing up for.’ People who stood beside you, people who lost their jobs because of you. Where you at? I ain’t heard from you. He brought the awareness and that’s why I respect him.”

Bryant made these comments to former NFL players Brandon Marshall, Chad Ochocinco, Fred Taylor and Channing Crowder during their discussion on the podcast that was released Monday.

Kaepernick offered no solution, no call to action, Bryant added. (It’s kind of hard to create jobs and inspire people in a positive way when you’re throwing anti-American grenades through social media, as Kaepernick did.)

This isn’t the first time the former Dallas Cowboys and Baltimore Ravens wide receiver has criticized Kaepernick. He said in 2019 that Kaepernick was not part of any sort of solution then, too.

Bryant has refused to kneel during the national anthem, as Kaepernick-inspired woke social justice warriors have done. Player activism and the police killing of George Floyd have prompted the NFL to shift into overdrive on social justice. Black Lives Matter propaganda is still visible during NFL games in 2021.

Despite his lack of solutions, Kaepernick has been hauling in bundles of money. Nike has created Kaepernick apparel. Netflix is running a six-part television series on the radical next month. He also hauled off millions of bucks in a settlement after suing the NFL for allegedly blackballing him. So he’s made out quite handsomely by transitioning from San Francisco quarterback to notorious radical leftist.

In 2016, Century Link and the Air Academy Federal Credit Union abruptly discontinued their endorsements of Marshall when he played and protested while a member of the Denver Broncos.