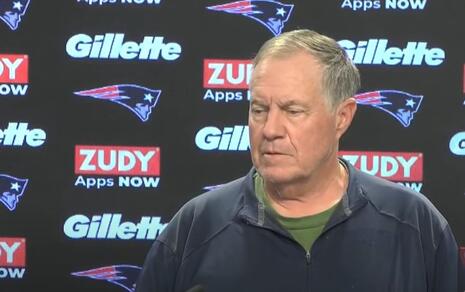 It’s no secret that professional sports are anything but champions for the freedom of thought. The NFL, NBA. WNBA and Major League Baseball have swung far to the left politically and avidly supported Democrat politicians, losing huge chunks of support from people fed up with their woke agendas. A new book is coming out next month chronicling how the New England Patriots showed their intolerance for Coach Bill Belichick over his friendship with former President Donald Trump.

In the book It’s Better to Be Feared: The New England Patriots Dynasty and the Pursuit of Greatness, Seth Wickersham explains how several members of the Patriots team expressed their anger with the Trump-supporting head coach. The book is mainly about New England’s NFL dynasty, but also addresses Belichick’s friendship with Trump.

An ESPN preview of the book notes that after Trump read a letter of support from Belichick at a campaign rally, former Patriots assistant coach Brian Flores (now the head coach at Miami) indicated players were angry with their coach and pressured him to justify his friendship with Trump. He “needed to say something” to the team, Flores said.

Belichick did address the topic with the team, but according to Flores, it was anything but well received by woke, intolerant players. “I don’t think he’s an intolerant coach. He isn’t a bad guy. Bill just f—ed up and justified it in a way that he would never accept from a player,” one unnamed player says in Wickersham’s book.

ESPN further reports, “Many players felt he was being disingenuous.” “It was hypocritical and out of character,” one player stated.

Apparently, no one was called on the carpet to explain support for 2016 presidential candidate Hillary Clinton. Nobody f—– up for supporting the Democrat. Politics only go one way in major pro sports. Think of LeBron James and Megan Rapinoe and so many other athletes, open and loud about their support of Democrats. No one is thinking about skipping practice over their views.

In a Super Bowl championship season (2016), there was no “coup” against Belichick, writes Brandon Contes, of Mediaite. How lovely that a pro football team did not rebel against a coach supporting a Republican presidential candidate, but this is the mind-set, the level of intolerance so plainly evident in professional sports.