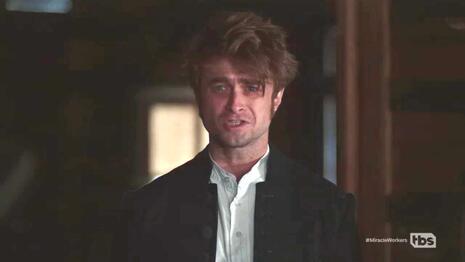 Well, the bigotry just gets worse and worse on the very anti-Christian comedy series Miracle Workers: Oregon Trail. These writers just can’t seem to help themselves (or come up with any other ideas) when it comes to hating on Christians.

The latest installment of the anthology series that started out by letting us know loud and clear how they felt about God and the Bible has made a mockery out of a reverend who has been falling from grace further and further with each passing episode, starting with him calling God a “sick son of a bitch” right from the first episode and ending with him becoming a God-hating cannibal. They also threw in a few jabs at Trump voters just because they can.

On the August 31 episode, “Over the Mountain,” Reverend Ezekiel “Zeke” (Daniel Radcliffe) covers up his adulterous affair with fellow married pioneer Prudence (Geraldine Viswanathan) by telling their spouses, Phaedra and Todd, that they’re doing “Bible study” together. Instead, they’re screaming out books of the Bible and the Lord’s name in a very different way (click “expand” to read more):

Todd: I’m looking for the Reverend. Have you seen him?

Phaedra: Oh! He and Prudence are having one of their special Bible study sessions in your wagon. Ah, my Ezekiel. He’s such a good man. Unlike you filthy sinners!

♪ Go tell it on the mountain ♪

Prudence: That was amazing. God, I’ve been married to Todd for so long, I forgot sex is supposed to feel good.

Zeke: These have been the happiest days of my life. It’s so strange, I know the Bible says what we’re doing is a sin, but everything about it feels so right.

Prudence: Maybe it is right. I mean, we’re both trapped in bad relationships. Once we get to Oregon, we’ll come clean to our partners and start our new life together.

Prudence: Todd! Uh, it’s not what it looks like.

Todd: I should have known all along… What an amazing man you are!

Todd: You’re the reason we’re getting to Oregon. And I know I have been a harsh critic at times. I was wrong, okay? I apologize.

Todd: And, on a personal note, I just want to thank you for all the special attention that you’ve been paying to my wife lately. I know you’ve been putting in the long hours with the Bible study lessons. I mean, I can hear her screaming “Oh, God! Oh, God!” So, I know that it’s working. Can’t really figure out why the two of you are butt naked right now, but I’m sure that’s part of it, too.

Todd: Well, I’ll let you guys get back to it. Hey, give it to her good, Rev. The Bible study lessons, I mean.

Prudence: Should we get back to our lessons?

♪ Go tell it on the mountain ♪

Haha? Zeke does begin to feel pangs of guilt, however, as bad things keep happening to the group, such as a lightning bolt striking down their lead ox on a sunny, clear day. After several other calamities occur, a nearby cliff starts to crumble and rocks begin flying towards everyone. As they take cover, Zeke shouts out a confession and repents to God and the rocks stop falling.

Zeke is relieved, but the group turns on him, especially his wife, when they learn of what he’s done. Todd takes his wife Prudence captive and plans to hold her hostage until she falls back in love with him. But at least Zeke repented, right? Wrong. The disasters and misfortunes continue to happen even after Zeke’s confession. Rather than trusting in God’s divine will as most reverends would do, Zeke decides God has abandoned him and doesn’t care about His creation.

On Tuesday’s episode, “Stranded,” Todd, Prudence and a crew of outlaws have made it to Oregon, while the rest of the group is stranded in a cabin during a harsh snowstorm. Zeke has separated from the group and is out in the cold. When William falls to the floor, dead of starvation, someone suggests they resort to cannibalism so they don’t starve.

Outlaw Benny the Teen (Steve Buscemi), who is normally without a conscience, hurries to find Zeke, hoping he can convince the group not to eat William’s body. But when they arrive back at the cabin, Zeke’s reaction takes Benny by surprise as he tells everyone God doesn’t care what they do, and nothing matters as they all dine on the body (click “expand” to read more):

Benny: Look, there’s some bad stuff going down at the cabin. I need you to come back with me and talk some sense into everyone! You know, do your preacher thing.

Ezekiel: Because everything I preached was a lie! I devoted my entire life to God, and what for? Prudence is in mortal danger, and we are trapped, dying, on a mountainside.

Benny: Ah, you’re just in a bad mood. Probably due to late-stage hypothermia. Come on, I need you to come with me! Oh! And uh, you might want to shave. You look like Davy Crockett if he was a huge pervert. Guys! Oh. Look who I found.

Ezekiel: Hi, Phaedra. It’s nice to see you, too.

Benny: All right, go on, Rev. Tell them what they’re doing is wrong.

Ezekiel: I’m not gonna tell you that.

Ezekiel: God doesn’t care what you do. Nothing matters. In fact, may I? Bon appétit.

Dingus: Whoa! Leave some for the rest of us.

Benny: Huh. I did not see that one coming.

Well, they might not have seen that one coming, but we totally did. Of course, they’re going to depict a Christian reverend as a hypocritical, morally bankrupt man who ends up hating God. Even his Christian wife who does have morals is depicted as uptight, judgmental, and hateful. Because there are never any good Christians in Hollywood, apparently.

There was also a side plot mocking former President Trump, as Todd decides to run for governor of Oregon because the town is too prosperous and doing too well. His supporters don red hats with “Make Oregon Bad” in white lettering, and they don’t care how awful he is. Even when they find out he’s keeping his wife hostage in a cage (an obvious wink toward liberals’ jokes that Melania Trump was kept hostage in the White House basement), they shrug their shoulders and say they’re still voting for him. It’s clearly a dig at Trump supporters who the Hollywood left views as imbecilic voters who had no good reason to support him (click “expand” to read more):

Prudence: Everybody stop! Todd is lying to you. We are not happily married. The truth is, he is a total psychopath who’s been keeping me in a cage.

Todd: Okay, well, it sounds bad when you say it like that.

Voter: This is an outrage. I am sickened to my core by your actions. Which is why it kills me… That I’m still gonna vote for you.

Voter: I know! I hate it as much as you do. I wish there was another way!

Prudence: There is. You could just not vote for him.

Trig: Of course it does. They’re a bunch of big, fat idiots.

Voter: Damn it! I hate this!

Thankfully, next week’s episode is the season finale. Let’s hope it becomes the series finale so the bigoted, anti-conservative storylines can finally be put to rest.

Conservatives Fight Back! This episode was sponsored by Nissan and State Farm. Click each advertiser for their contact information so that you can let them know how you feel about these episodes.