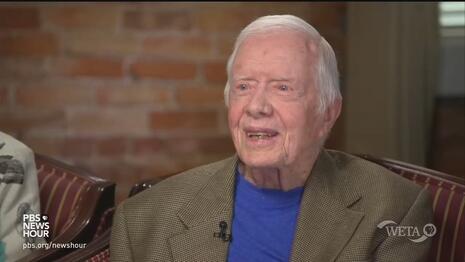 In reality, Carter’s just getting another outburst of boosterism from liberals. The headline could be “Jimmy Carter gets fresh look from liberals 30 and under.” One youngster even claimed we’d have no “climate crisis” today if Carter had won a second term.

Carter is now 96 and confined to home, but AP sounds like they’re trying to cheer him up. Barrow began by noting many call him a better ex-president than president.

Yet now, 40 years removed from the White House, the most famous resident of Plains, Georgia, is riding a new wave of attention as biographers, filmmakers, climate activists and Carter’s fellow Democrats push to recast his presidential legacy, even as Republicans sometimes try to remind voters of the volatile economy and international affairs that doomed Carter to one term.

In the past year, however, CNN released a documentary titled: Jimmy Carter: Rock & Roll President and independent documentarists Jim Pattiz and Will Pattiz debuted Carterland at the Atlanta Film Festival.

Republicans will stifle giggles over the Carterland message: “WHAT IF THE LEADER WE NEED, WAS THE LEADER WE HAD?” They claim “Carter’s selfless leadership and moral integrity ultimately cost him the presidency.“

AP said the Pattiz brothers see Carter as a “visionary on environmental issues.”

“Carter had these very farsighted views of how he wanted to solve the energy crisis, and it involved conservation, but also involved turning away from fossil fuels and turning toward renewable energy, things like solar power and other renewables,” said Jim Pattiz, 29.

Carter put solar panels on the White House, and he called for “shared sacrifice” to confront energy shortages. But he couldn’t overcome voters’ frustrations with fuel prices and availability. The solar panels were removed during Reagan’s presidency. But Will Pattiz, 30, said time vindicated Carter. If “President Carter had gotten an extra term in office,” he said, “we likely wouldn’t be having a climate crisis right now.”

AP even posted a video boosting the Pattiz propaganda:

Notice Will Pattiz is wearing a Carter Center jacket. The film was celebrated with a panel discussion at the Carter Library, hosted by Jimmy. This isn’t some spontaneous outburst of pro-Carter sentiment. AP is promoting a Carter-authorized attempt to spin out of that whole hyperinflation-and-hostages narrative.