As America Burns, Where Are Biden, Harris, Pelosi And Schumer? Death and destruction are raining down on many American cities, with all of the violence at the hands of leftist, murderous Democrats, and the leadership of the Democrat party say nothing, and do nothing, about it.

This dereliction of duty and lack of responsibility on the part of corrupt Democrat officials makes them culpable for the deaths and destruction flowing from one Democrat-run city after another. One can recall when Democrats criticized “conservative” television shows that depicted war and violence as the cause of actual socially irresponsible behavior among American citizens, but with leftist radicals running amok and burning buildings at will, accompanied by the silence of Democrat officials not demanding that this foolishness stop, the reason that the psychotic violence continues is: Democrats.

Recently the mayor of Chicago, a city at war with its police department and demanding that the police force be dismissed completely, reversed course when she and her home were personally subject to violence from the Democrat mob: she called the police and demanded protection. But given the maltreatment that police forces of big cities have received lately, no one can blame police officers if they ignore what has become typical Democrat behavior these last few months. So if police officers turn their backs on the shootings, the burnings and the individual beatings performed by Democrat field forces, and continue on to more pleasant chores, it‘s easy to understand how they could make such a decision. If the city mayor and the city government are not going to back the police in the dirty and dangerous job they perform, then why do it?

After I wrote the paragraphs above about Democrat officials not condemning the violence breaking out in Democrat-run cities, and as chance would have it, a few hours later Joe Biden, in his usual stumbling, fumbling and stammering way, became the first Democrat who actually admitted that the leftist violence was occurring in various cities, and he said that the killing and rioting that Democrat shock troops were doing was bad and needed to stop.

Unfortunately, the only reason Biden made such a belated and lame statement about the violence of the leftist ANTIFA and BLM thugs these last two months, was that CNN’s Don Lemon made a statement earlier in the day confirming that the rioting and property destruction were hurting Biden’s chances of being elected president, and he strongly advised the Biden people to speak against the violence in order to stop the Biden ratings decline now that the Republicans were presenting their convention and upstaging the Democrats across the board.

So Joe Biden and Don Lemon spoke up against violence, beatings and killings not because these things are bad in themselves, but because the ratings showed them that Americans are against such evil behavior. All Democrats care about is winning and gaining power, and human suffering is not even considered. This should be all the evidence Americans need to re-elect Donald Trump in November. 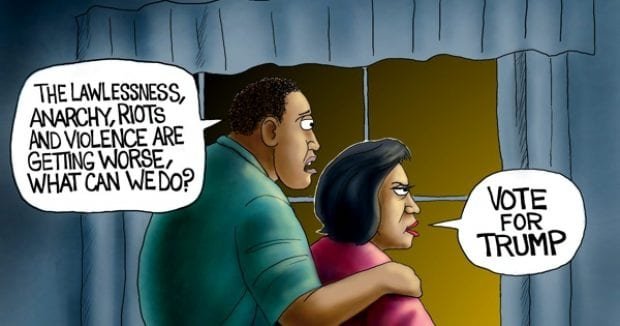 As America Burns, Where Are Biden, Harris, Pelosi And Schumer? is original content from Conservative Daily News – Where Americans go for news, current events and commentary they can trust – Conservative News Website for U.S. News, Political Cartoons and more.