The very raison d’etre of NewsBusters and its parent, the Media Research Center, is combating the left’s domination of the media. To this day, every major newspaper [with the occasional exception of the WSJ’s editorial pages] and every TV network with the exception of FNC, spews a steady stream of liberal propaganda.

But Axios co-founder Jim VandeHei, formerly of Politico, warned on today’s Morning Joe of a Republican media “infrastructure”—why not come right out and call it a vast right-wing media conspiracy?! According to VandeHei, in that conservative media  “infrastructure,” all are talking about the same thing: the violence in the streets of America.

Mika Brzezinski noted polls were tightening, and yet Joe Scarborough mocked the issue of law and order: “Worrying about women’s safety when low-income people come in. It’s all very racially tinged. And he thinks this 1953 appeal to white suburban voters is going to work. It just, predictably, seems to be backfiring because it’s why white suburban voters started running away from him, you know, after Charlottesville.”

But VandeHei  fretted that “most people in the media  . . . don’t realize the amplification” of the right-wing “infrastructure.” Indeed: we are a shadowy, secret cabal, working in surreptitious ways in the darkness We are unseen, but are tentacles are everywhere! 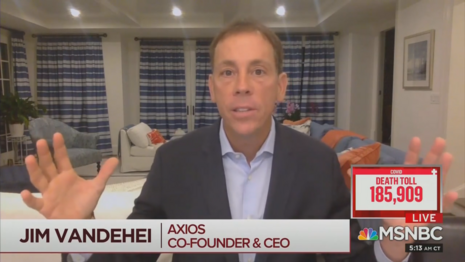 For decades, the liberal media operated without any real opposition. Now that some has sprung up, the MSM hates it, and tries to cast it in a sinister light.

VandeHei ended by warning that the impact of that grand right-wing media “infrastructure” might eventually be seen in the polls. His spiel amounted to a clarion call to his brethren in the liberal media: time to counter the conservative infrastructure by turning our attacks on Trump up to 11! As if they haven’t been stuck there.

VandeHei’s warning of a vast right-wing media conspiracy was sponsored in part by Choice Hotels, and Fidelity.

JIM VANDEHEI: So, really interesting thought experiment that I did on Sunday. I went into, like — basically, I do truly now believe we have like a tribal world where we live in different bubbles. So I went into the Trump bubble.

I listened to Ben Shapiro. I listened to a tape of Rush Limbaugh. I looked at the top trending stories on Facebook, all of them from right-wing sites, and watched Fox News.

And their belief is — and I do think you’re right — their belief is that, eventually, that will get people, even if they won’t tell a pollster, get them to vote for Donald Trump, because they will be scared stiff by Election Day. I have no idea if it will work, but there’s no doubt that this is not just Donald Trump anymore. It is the entire infrastructure. And I think it’s an infrastructure that most people in the media don’t pay that much attention to, so they don’t realize the amplification of that.

And by the way, it works both ways. A lot of these conspiracy theories he was talking about in that Fox News interview, they’re pulled from some of the top-trending items that move on Facebook. And so there’s a great piece that everybody should read in the New York Times last week about understanding, if you put your head inside the Facebook machine, most of the stories that travel and get the widest audience tend to come from Ben Shapiro, Franklin Graham, Breitbart, sites and people that most Americans aren’t paying attention to, but people on Facebook are, and that is the Trump base. And now the question is, over the next couple weeks, do we start to see those polls move, either private polls or public polls?