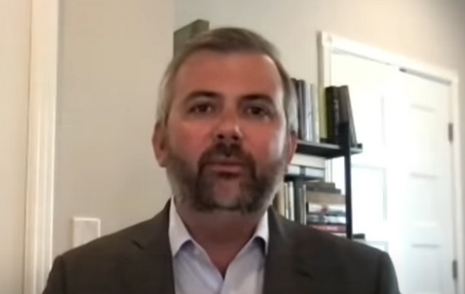 Following the release of the abysmal job growth report on Friday, Irwin had the nutty spin: “The New Jobs Numbers Are Pretty Good, Actually.” Irwin had a much different reaction earlier on Twitter that undercut the gaslighting in his article. He tweeted immediately at 8:30 a.m. ET, after the Bureau of Labor Statistics (BLS) report dropped: “+194k on payrolls, a big miss. But unemployment rate way down to 4.8%.” He tweeted one minute later (8:31 a.m.) in his instant coverage of the BLS data: “Debating how many ‘o’s should be added to the word ‘oof’ in this circumstance.” He wrote in the lede paragraph of his article: “It’s not as bad as it looks.” That’s an interesting way of characterizing the “Slowest [Job Growth] Pace of [the] Year.”

Debating how many “o”s should be added to the word “oof” in this circumstance.

Irwin celebrated that the economy was in a “steady expansion that is more rapid than other recent recoveries. It is being held back by supply constraints and, in September at least, the emergence of the Delta variant. But the direction is clear, consistent and positive.” He falsely stated that the unemployment rate “fell for good reasons, not bad — the number of people unemployed dropped by a whopping 710,000 while the number of people working rose by a robust 526,000.” The Wall Street Journal reported that “[m]any workers gave up the job search and exited from the labor force last month, the data showed.” It continued: “The smaller pool of labor meant that despite the slowdown in hiring, the unemployment rate fell to 4.8% last month from 5.2% in August.” 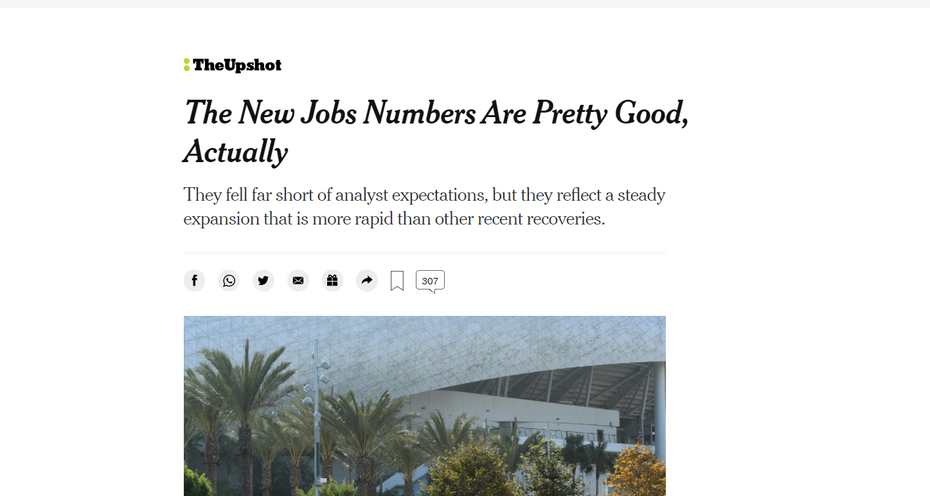 Capital Economics Senior U.S. Economist Michael Pearce told The Journal that “‘[t]his was the time when a lot of people were expecting labor shortages to be getting better, but in fact they’re getting worse.’” [Emphasis added.]

Irwin’s bizarre take is apparently not shared by other writers with his own paper. Fellow Times economics writer Ben Casselman released a piece on the jobs report with a more appropriate outlook the same day as Irwin’s story: “Jobs Report Offers Little Reassurance on U.S. Economy.” Also, the front page of The Times website Oct. 8  had Irwin’s story juxtaposed to Casselman’s story. Casselman’s story, which upended Irwin’s spin that the jobs report was “good,” was headlined: “U.S. Hiring Was Weak in September, as Delta Takes a Toll.”

Top of @NYTimes web site at noon Friday, Oct. 8. Headline on left with bad news for Biden and Dems: “U.S. Hiring Was Weak in September.” Headline on right with the pushback spin: “Analysis: The New Jobs Numbers Are Pretty Good, Actually.” pic.twitter.com/WAqYE63PbK

Conservatives are under attack. Contact The New York Times at 800-698-4637 and demand it to tell the truth and correct Irwin’s nonsensical spin of the terrible BLS jobs report.