If you think Facebook has been censorious of President Donald Trump already, the Biden campaign just showed that if it got its way, Trump’s voice and conservative speech in general would be outright obliterated. 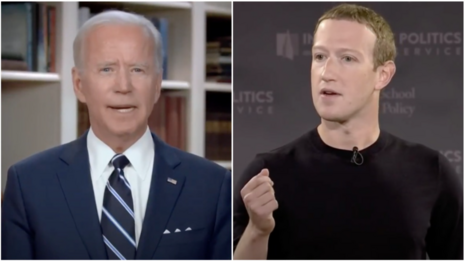 Axios reportedly obtained a three-page letter from campaign manager Jen O’Malley Dillon addressed to Facebook CEO Mark Zuckerberg. O’Malley raked Facebook’s leadership over the coals in the letter complaining that “Rather than seeing progress, we have seen regression.”

The letter threw down the gauntlet, declaring that going forward, “We will be calling out those failures as they occur over the coming 36 days.”

The copy of the letter shown by Axios features The Biden campaign specifically torching Facebook leadership for allowing a video from Donald Trump Jr. expressing concern over mail-in ballot fraud and rallying supporters:

“No company that considers itself a force for good in democracy, and that purports to take voter suppression seriously, would allow this dangerous claptrap to be spread to millions of people. Removing this video should have been the easiest of easy calls under your policies, yet it remains up today.”

The Biden campaign also slammed Facebook for allowing “hyperpartisan propaganda” such as “the Daily Wire” to be successful on the platform, suggesting that “Mr. Trump and his allies are hijacking this model to sow distrust in our democracy.”

If Facebook should be in trouble for anything, it’s not for the rise of conservative online journalism, but for allowing radical far-left groups to operate unchecked.

Zuckerberg had explained his concerns about upcoming civil unrest in an early September interview with Axios: “I think we need to be doing everything that we can to reduce the chances of violence or civil unrest in the wake of this election.” He then went on to claim: “We’re trying to make sure that we do our part to make sure that none of this is organized on Facebook.”

But the record shows that he has not taken action.

Even after being contacted about what major media describe as violent groups such as Rose City Antifa and foreign interference such as Canadian far-left organization Adbusters, Facebook has proven that it does not follow through on its founder’s commitment to reduce political unrest amidst elections.

In mid-September Facebook allowed activists to organize on the platform to harass sitting U.S. Senator Lindsey Graham (R-SC) at his purported home address about how he intends to vote concerning a replacement for deceased Justice Ruth Bader Ginsburg on the U.S. Supreme Court.