Big-Spending NY Times Lead: ‘Setback For Recovery’ If Dem Cities Not Bailed Out 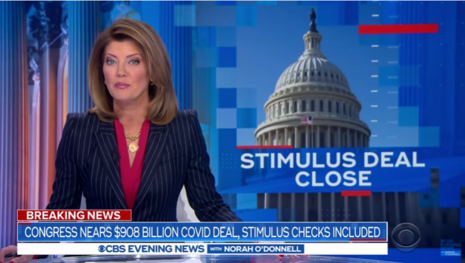 Friday’s lead New York Times story on the debate over the coronavirus stimulus package was told wholly from the liberal Democratic perspective, while pitying president-elect Joe Biden: “Hurdle For Biden As Stimulus Bill Drops State Aid – Setback For Recovery – Congress Rushes for Deal on Virus Relief After Months of Feuds.” The online subhead read: “A campaign by conservative activists and disputes over how to divvy up federal assistance have thwarted negotiators. But President-elect Joe Biden will make a new push for such funding next year.”

As lawmakers race to put the final touches on a $900 billion bipartisan stimulus package, one thing is becoming clear: Congress has left a significant challenge for the incoming president, Joseph R. Biden Jr., and his efforts to revive the faltering economy.

To seal the deal after months of struggle, lawmakers agreed to exclude a direct stream of money for state and local governments, which Republicans objected to as a blue state “bailout” but Democrats said was needed to prevent job cuts and economic pain.

No surprise which side the paper’s lead story takes, it’s evident from that loaded headline phrase, “Setback for Recovery.”

Mr. Biden has promised to help local governments, which are struggling with plunging tax revenue and increased costs, creating huge budget gaps that have already resulted in 1.3 million state and local jobs lost since March. Economists warn that, without further help, states and cities could further slow the economic recovery by cutting more jobs and spending.

Even though Senate Majority Leader Mitch McConnell gave up the Republican demand for liability waiver for businesses from coronavirus-related lawsuits, the paper’s focus was on the failure to bail out mostly Democratic-led state and local governments.

The reporters cannily placed Democrats on the side of “many economists” to give their argument a patina of objectivity.

But the package is not expected to contain funding anywhere close to what Democrats and many economists say is necessary to avoid more public sector layoffs in the years to come.

The U.S. economy struggled to shake off the last recession, with historically slow growth and a sluggish job market, in part because cities and states continued to lay off workers years into the recovery, pushing up the unemployment rate. It took until 2019 for state and local jobs to return to 2008 levels of unemployment. Democrats and liberal activists have warned that Congress risks repeating those mistakes.

And so does the New York Times. Republican points were allowed, but quickly neutralized through word choice and undercutting.

Many Republicans have consistently opposed state aid, saying it would reward Democratic states that mismanaged their finances. One of their main talking points has been that states could use federal assistance to shore up public employee pensions — though the draft bipartisan agreement would have prohibited such spending.

“What Democrats really want is for Congress to just send money to liberal politicians who have already shown they can’t be trusted with it,” Senator Rick Scott, Republican of Florida — a state that faces a $2.7 billion budget shortfall — wrote in an op-ed for National Review last week. “If these politicians have budget shortfalls, it’s because they did not prioritize their struggling constituents in the first place, and instead wasted money on other things.”

Influential conservative groups like Americans for Tax Reform and Heritage Action for America have called the issue a “red line for conservatives.”

Forbes laid out the partisan cases more directly and in more balanced fashion:

The exclusion of additional federal aid for state and local governments is a major reversal for Pelosi and Schumer, who for months have maintained that the provision was critical to prevent mass government layoffs and protect essential services. Republicans, led by McConnell, on the other hand, were staunchly opposed to what they cast as an unfair bailout to Democrat-run states and cities that had mismanaged their finances….