The Big Three continue to prove themselves to be just obsessed with defeating President Donald Trump, rather than doing their jobs and reporting good news when it comes. 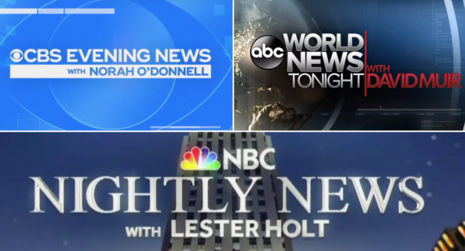 A shocking new Axios report hit yesterday with news that Wall Street is saying that “the recession is over,” and that economic forecasts are now “showing sustained economic growth through 2021 and beyond.” Moreover, U.S. economic activity is projected “to grow more sharply in the third quarter of this year than during any other quarter in history.” On top of this, Bloomberg News reported the same day that U.S. household net worth soared $7.6 trillion to $119 trillion in the second quarter, surpassing its pre-pandemic peak. To put that into context, “[t]he gain was the largest in quarterly records back to 1952.” [Emphasis added.]

The Big Three networks ABC World News Tonight, CBS Evening News and NBC Nightly News ignored reporting on any of the Axios report findings or the housing market news. CBS Evening News, in particular, instead chose to spend coverage pleading with viewers to be terrified of a Supreme Court “dominated by conservatives.”

The deliberate ignorance to good economic news seems to be getting worse as the November elections are approaching.

The U.S. Census Bureau released a September 15 report showing that median household income was “$68,703 in 2019, an increase of 6.8 percent from the 2018 median of $64,324.” University of Michigan professor of economics and finance Mark J. Perry tweeted a day later that this “was the highest on record and about 10X the average increase of 0.72% since 1968.” Also, the official poverty rate in 2019 dipped to 10.5 percent, “the lowest rate observed since estimates were initially published in 1959,” the Bureau said.

Bloomberg News reported a day after the Bureau report’s release that current homebuilder optimism “jumped five points from a month earlier to 83, beating estimates and hitting the highest level in 35 years of the survey, according to the National Association of Home Builders/Wells Fargo Market Index.”

Guess what: The Big Three ignored reporting the Bureau’s report on median household income and the record low 2019 poverty rate, in addition to the Bloomberg News report on astronomical home builder optimism. This blackout on the news happened across two days of news coverage.

The MRC has documented 13 times the Big Three have censored reporting on good economic and market news in 2020 that reinforced Trump’s optimism on a rapid economic recovery.

If you were looking to the Big Three’s counterpart morning news shows to be any better, don’t count on it.

The American people must let these networks know that continuing to pull the wool over their eyes on good economic and market developments with impunity because it boosts Trump’s image cannot be tolerated any longer.