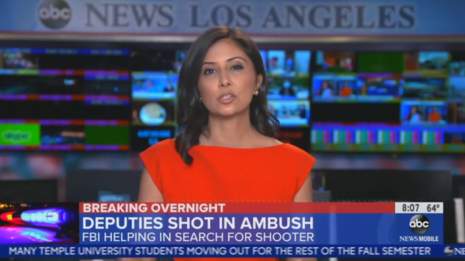 Overnight, two Los Angeles County Sheriff’s deputies were hospitalized and fighting for their lives after a man walked up to their cruiser and opened fire in an ambush-style attack. After the deputies were rushed to the hospital, a crowd of Black Lives Matter extremists swarmed the Emergency Room entrance, blocking admittance while they chanted “death to police” and “we hope they die.” Come Sunday morning, ABC’s Good Morning America noted the shooting but omitted the extremists.

In her report, ABC Los Angeles correspondent Zohreen Shah reported that the deputies “were alert enough right after the shooting to radio in their own help. Their department tweeting, ‘They are both are still fighting for their lives’ and ‘are in critical condition.’”

Adding: “Those deputies were identified as a 31-year-old mother of a 6-year-old and 24–year-old man. They were both sworn in 14 months ago according to the sheriff. Now the President has tweeted about the incident and the FBI is also now offering its help with finding the suspect.”

As evident by the transcript below, at no time did Shah or co-anchors Eva Pilgrim and Whit Johnson inform viewers about the Black Lives Matter extremists blocking admittance to the hospital.

But note that Shah told viewers what the Sheriff’s office was tweeting in terms of their condition. Just three tweets later in the thread she was reading from, the department called out what Black Lives Matter was doing:

To the protesters blocking the entrance & exit of the HOSPITAL EMERGENCY ROOM yelling “We hope they die” referring to 2 LA Sheriff’s ambushed today in #Compton: DO NOT BLOCK EMERGENCY ENTRIES & EXITS TO THE HOSPITAL. People’s lives are at stake when ambulances can’t get through.

The sheriff’s office also documented how, as they were breaking up the crowd, a purported member of the press appeared to be taking part in the “unlawful assembly” and rushed officers attempting to make an arrest.

“During his arrest, a struggle ensued at which time a female adult ran towards the deputies, ignored repeated commands to stay back as they struggled with the male and interfered with the arrest,” they wrote, “The female adult, who was later identified as a member of the press, did not identify herself as press and later admitted she did not have proper press credentials on her person.  Both individuals have been arrested for 148 P.C.”

Standing in stark contrast to ABC and Shah’s reporting, NBC’s Sunday Today led with the “overnight breaking news” ahead of their coverage of the Wildfires in the West. Correspondent Gadi Schwartz began his report my immediately describing the ambush as “cowardly.”

“My gosh. Gadi Schwartz, an ugly scene there in Los Angeles County,” anchor Willie Geist responded as he transitioned between stories.

ABC’s cover-up for Black lives Matter extremists was made possible because of a lucrative sponsorship from Chase Bank, which co-anchor Whit Johnson gave a special shout out to as they were going to commercial. Their contact information is linked so you can tell them about the biased news they funding.

ZOHREEN SHAH: Good morning, Eva. This morning the suspect who ambushed two Los Angeles deputies in Compton last night is still on the run. Surveillance video shows a man dressed in black walking toward the deputy car holding out a gun, shooting multiple times, and then running off.

The deputies were parked, sitting inside their vehicle in what appeared to be a well-lit area, near the Compton metro station, very close to their own sheriff station. They were alert enough right after the shooting to radio in their own help. Their department tweeting, “They are both are still fighting for their lives” and “are in critical condition.”

Those deputies were identified as a 31-year-old mother of a 6-year-old and 24–year-old man. They were both sworn in 14 months ago according to the sheriff. Now the President has tweeted about the incident and the FBI is also now offering its help with finding the suspect. Whit?

GADI SCHWARTZ: Hey, good morning, Willie. Those two deputies are fighting for their lives this morning as officers across Los Angeles conduct a manhunt for the shooter. And while they don’t have him in custody yet, they have released this video of the attack. And we have to warn you, it is disturbing.

Overnight a cowardly ambush on the streets of Compton, California. A gunman walks up to a patrol car with two sheriff’s deputies inside and opens fire before running from the scene.

SCHWARTZ: The two deputies out of surgery. One is a 31-year-old mother of a six-year-old boy, her partner is a 24-year-old man.

VILLANUEVA: They just graduated. And in fact, I just swore them into office just 14 months ago.

SCHWARTZ: The deputies were able to radio for help and give a partial description of the shooter as a dark-skinned male. The suspect is still at large.

VILLANUEVA: Seeing somebody just walked up and just start shooting on them. It’s — it pisses me off.

SCHWARTZ: The motive is still unknown.

REGGIE JONES-SAWYER (California State Assembly): Tonight we must as a community condemn the actions of the perpetrators, but most importantly, we must also come together, pray together for these officers. Because they are heroes.

SCHWARTZ: This attack is the latest after a summer of confrontations between police and protesters. President Trump weighing in on Twitter saying the shooter is an animal “that must be hit hard.” And last night, there was a small protest at the hospital where the Sheriff’s Department says they arrested several protesters who were blocking the entrance of the hospital and shouting “death to police.” Willie, back to you.

GEIST: My gosh. Gadi Schwartz, an ugly scene there in Los Angeles County, thanks so much.