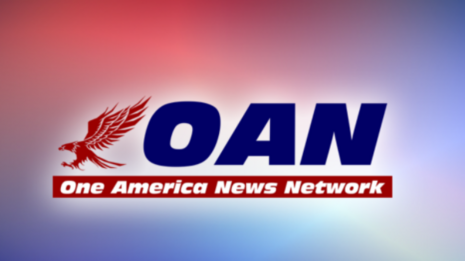 The table of contents of the October 26 Bloomberg Businessweek magazine touts a story on “The Future of MAGA TV: At One America News Network, they’re fed up with those lefties at Fox.”

Inside, the headline is “An Audience of One: OAN has positioned itself as the Trumpiest channel on air — and an eventual home for the president, win or lose.”

Felix Gillette and Gerry Smith lard on the mocking prose for these so-called “oddball supplicants” to Trump:

Since taking office, President Trump has ushered into Washington a baroque procession of louche political operatives and oddball supplicants unlike anything seen in prior administrations. In the news business, OAN has been the single most jarring arriviste. The network, which started broadcasting in 2013, has managed to claw its way out of the cable news hinterland of San Diego and into the White House briefing room. Trump regularly calls on its reporters and touts it on Twitter, holding it up as a worthy alternative to Fox.

Trump’s affinity for the network is proving to be its own kind of currency—albeit one that might seem at risk of serious devaluation. As the election looms, OAN faces a crucial test: Can it capitalize on the next act of its beloved protagonist, whether it’s a second term or a post-presidency?

Some industry observers have speculated that, if Trump loses, he could acquire Herring Networks Inc., the little-known company that owns OAN, and turn the channel into his own TV network, siphoning off die-hard MAGA-heads and QAnon fanatics as Fox embraces whatever comes next from the establishment GOP.

The purple prose reaches a sickening crescendo when they compare Herring’s visit to the Trump hotel near the White House as “the MAGA hajj,” like Trump is some American version of the prophet Muhammad.

Once Trump gained office, OAN spiraled into a firenado of MAGA-friendly content. According to former employees, Mr. H involved himself deeply in the process, combing through right-wing websites for ideas and assigning stories. At some point, he dutifully performed the MAGA hajj, traveling to stay in the Trump International Hotel Washington, D.C., which he was aghast to find didn’t subscribe to OAN. He duly complained on Twitter.