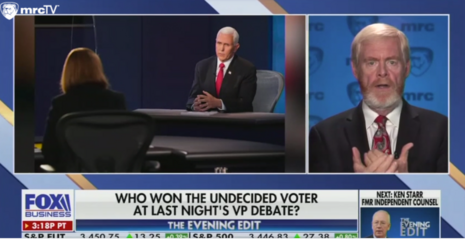 Media Research Center President Brent Bozell appeared on Fox Business, Thursday, and highlighted how Mike Pence exposed the far-left agenda of the Biden/Harris ticket during the vice presidential debate. Debate moderator Susan Page outrageously refused to force Kamala Harris to explain whether the Democrats would pack the Supreme Court. So Pence did it instead. Bozell cheered, “I think everyone who watched saw the disingenuousness of a campaign that simply will not tell the American people what they’re going to do.”

LIZ MACDONALD: Joining me now Media Research Center’s — back with us is Brent Bozell. Brent, it’s always great to have you back on. Now, we’re asking our guests this, who do you think won the vice presidential debate? Who got the undecided voters, the voters sitting on the fence? what do you think?

BRENT BOZELL: Well, I think — I think there’s two-ways to measure a debate, one is substance and the second one is optics. First to the optics, you saw — what you saw, I saw all night long was one candidate smirking, laughing, shaking her head incredulously, being disrespectful, her tone of voice being condescending. And the other side, you saw the candidate who was smooth, generous, quiet, behaving like a complete gentleman. Optics, the winner is Pence. When it comes to substance, I will say something here. If the Trump campaign wins in November, I think you’re going to say that last night was the turning point in the campaign. Why do I say that? Because on issue after issue after issue on substance, the Vice President nailed the Biden-Harris, ticket, whether it was on taxes with a massive tax increase coming, whether it was on fracking, whether it was on abortion, and finally on packing the courts. I think everyone who watched saw the disingenuousness of a campaign that simply will not tell the American people what they’re going to do. And we just heard today by the way, Joe Biden saying he will not tell people until after the election whether or not he’s going to destroy the supreme court. I love it.

MACDONALD: Interesting. Okay. So here’s, also, what else happened. Kamala Harris opened hard on COVID-19 but the question was, what would Biden-Harris do differently on COVID-19. Pence firing back, Biden, you’re just copycatting the Trump plan, the Biden-Harris. Let’s — and brought up Biden’s plagiarism problem. Let’s watch the highlight reel

VICE PRESIDENT MIKE PENCE: Your continued undermining of confidence in a vaccine is just — it’s just acceptable. And let me also say, you know, the reality talk about failure in this administration, we actually do know what failure looks like in a pandemic. [SCREEN WIPE] When Joe Biden was vice president of the united States not 7.5 million people contracted the swine flu, 60 million Americans contracted the swine flu.

PENCE: The reality is when you look at the Biden plan, it reads an awful lot like what President Trump and I and our task force have been doing every step of the way. [SCREEN WIPE] It looks a little bit like plagiarism which is something Joe Biden knows a little bit about. [SCREEN WIPE] When Joe Biden was Vice President, we had an opportunity to save Kayla Mueller. Breaks my heart to reflect on it, but the military came into the Oval Office, presented a plan. They said they knew where Kayla was, Baghdadi had held her for 18 months and abused her mercilessly before they killed her. But when Joe Biden was vice president they hesitated for a month.

MACDONALD: Okay, that’s the Kayla Mueller story. The humanitarian aide worker in Syria raped, tortured, and eventually murdered by ISIS. He closed that out with that pretty tough anecdote. Your final thoughts on this debate?

BOZELL: Well I think Vice President Mike Pence came across as what he is, a very decent, good man and it showed. And I think at the end of the day, the Biden-Harris came campaign is looking more and more calculated in nature. That’s not going to sell well with the American people ultimately.

MACDONALD: Brent Bozell. Thanks for joining us. It’s great to see you. Come back soon.