Prepared to give up your liberty for the sake of “public peace, health, or safety”? A new California bill would criminalize the spread of election misinformation — even on social media.

Americans can be prosecuted for their private messages on social media platforms if they contain misinformation, according to new legislation. Senate Bill 739 declared that “A person is guilty of a misdemeanor” who distributes “misleading information” about elections whether it be via “mail, radio or television broadcast, telephone call, text message, email, or any other electronic means.”

“Governor Gavin Newsom has already signed,” as of last Friday, Reclaim the Net observed in its September 22 article. The California government website stated “Approved by Governor  September 18, 2020” and that it would “take effect immediately.” 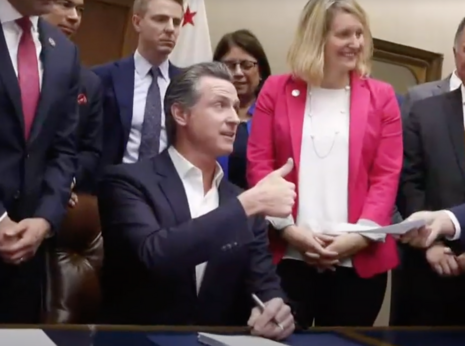 Democrat Senator for the 27th Senate District Henry Stern, who authored the bill, did not mince words about the severe, and intentional, outcome of such legislation, according to Reclaim the Net:

“If you’re putting out tweets, Facebook posts or using social and other types of media to intentionally mislead voters about their right and ability to vote by mail, that’s now a crime, and it’s my hope local DA’s and the state attorney general will go after violators the moment they see them.”

Stern later added that “In the midst of this worldwide pandemic, it is imperative that voters, especially those who are getting a vote-by-mail ballot for the first time, know their rights and are getting accurate, reliable information,” CBS Local reported.

The same CBS article quoted California Secretary of State Alex Padilla who reportedly proclaimed: “We need to discourage and combat election disinformation that could disenfranchise citizens. Our democracy depends on it.”

The actual bill itself specified a broad range of misinformation types and different mediums of spreading said misinformation that could cause everyday Americans to be prosecuted to the full extent of the law:

“(b) A person is guilty of a misdemeanor who, with actual knowledge and intent to deceive, causes to be distributed or distributes, including distribution by mail, radio or television broadcast, telephone call, text message, email, or any other electronic means, including over the Internet, literature or any other form of communication to a voter that includes any of the following:

(2) False or misleading information regarding the qualifications to vote or to register to vote.

“(3) False or misleading information regarding the qualifications to apply for, receive, or return a vote by mail ballot.

“(4) False or misleading information regarding the date of an election or the days, dates, or times voting may occur at a place described in paragraph (1).”

The conclusion of the bill declared that this act is an “urgency statute necessary for the immediate preservation of the public peace, health, or safety.” Free speech advocates, however, would note this comes at the cost of basic American liberty.