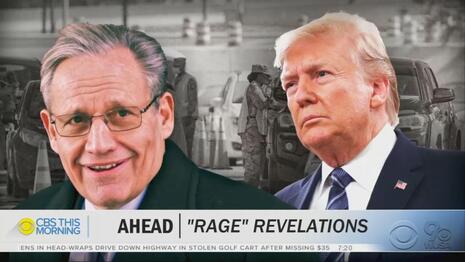 Worse than Watergate. It’s a liberal media cliche that has been used so many times, it has little meaning. But that didn’t stop CBS This Morning co-host Tony Dokoupil on Tuesday from goading journalist Bob Woodward to declare that the revelations in his new book Rage are “graver than Watergate.”

Dokoupil pushed, “Your former reporting partner Carl Bernstein of Watergate fame called these tapes, the tapes tied to your book, graver than those Watergate tapes, referring to the loss of life and importance for history. Do you agree with that assessment? Is this graver than Watergate?”

On Thursday, King hyped the book and, you guessed it, compared it to Watergate: She asked reporter John Dickerson, “I was watching the news last night, I stayed up very late watching all the coverage…. It’s being compared to the Watergate tapes and to a smoking gun. Do you think it rises to that level?”

On Sunday, 60 Minutes co-anchor Scott Pelley pretended it was shocking Woodward sounds partisan: “You’re known as the reporter who doesn’t put his thumb on the scale. And yet, at the end of this book, you do just that.”

Anyone who saw him write about Republican presidents shouldn’t be surprised over this new book.

The spin on CBS This Morning was sponsored by Toyota and Acura. Click on the links to let them know what you think.

TONY DOKOUPIL: Startling revelations. Bob Woodward talks to us about President Trump’s revelations he misled the public about the coronavirus and what the president told him about our military leaders.

TONY DOKOUPIL: New audio released by renowned journalist Bob Woodward reveals more about President Trump’s early recognition of the severity of the coronavirus. The clip comes from April from one of the 18 interviews that Woodward conducted with the President for his book Rage, published by Simon and Schuster, which happens to be a division of Viacom/CBS. Take a listen to the clip.

DONALD TRUMP: And Bob, it’s so easily transmissible, you wouldn’t even believe it.

TRUMP: I mean, you could be in the room. I was in the White House a couple of days ago, meeting with ten people in the Oval Offaice and a guy sneezed, innocently. Not a horrible

TRUMP: You know, just a sneeze. The entire room bailed out, okay, including me by the way.

DOKOUPIL: Very recognizable image there. Woodward asked the President to grade his coronavirus response and the president said, quote, “I give ourselves an A. But the grade is incomplete and I’ll tell you why. If we come up with a vaccine and the therapeutics and I give myself an A-plus.” This comes, of course, as the death toll in the U.S. approaches 200,000 by far the highest of any country on Earth. Bob Woodward joins us now from Washington. Bob, good morning to you. Congratulations to publication day. You’ve gotten to the finish line

DOKOUPIL: and I can inform you that President Trump just pronounced  your book on Fox News boring. So, you have a quote for the paperback. We have a lot to get to. We want to begin with the grade the President gave himself an A, moving up to A-plus. He said nothing more could have been done. From your reporting, from your research do you agree and what grade would you give the President?

WOODWARD: Well, I don’t think I should give grades, but I can report at the end of January it was laid out to him in great detail that the pandemic was coming and that it was equivalent to the 1918 Spanish Flu pandemic in this country 100 years ago that killed 675,000 and it was laid out to the President why this is the case the Deputy National Security Adviser  in the White House, Matt Pottinger, had sources, medical sources in China where he had worked for the Wall Street Journal for seven years that had these sources had impeccable credentials and laid out exactly what was coming and the President knew this and, for instance, a few days later at the State of the Union address he said, “We’re doing everything we can,” rather than telling the truth to the American public about what he had been warned about.

TONY DOKOUPIL: Your former reporting partner Carl Bernstein of Watergate fame called these tapes, the tapes tied to your book, graver than those Watergate tapes, referring to the loss of life and importance for history. Do you agree with that assessment? Is this graver than Watergate?

WOODWARD: Yes. And Nixon was a criminal president. And if you look at the chronology, the information, the authoritative information  I was able to get, the President’s job I remember at one point in an interview asking President Trump what is that job? “How would you define that job?” He said, “The job is to protect the people.” He failed to do that. And he could have, I in initial discussion with him in February I thought he was talking about the virus in China. I later learned, unfortunately, it took a number of months the until May that he had been told in January about this.

ANTHONY MASON: Bob, the President revealed to you that the U.S. has a secret new nuclear weapons system that neither the President of China or Russia know about. What was your reaction when you heard that?

WOODWARD: Well, I did some reporting afterwards and some people said there is something. It’s in dispute. One of the key experts I talked to said there’s no such weapons system. There are lots of things on the drawing boards.

MASON: So you don’t know whether it actually exists?

WOODWARD: I do not. And the President insisted that it did. He’s the commander-in-chief. But, again, he will say things as we talked that just don’t check out.

WOODWARD: Well, you can’t know for sure and Dan Coates —  now, remember under the new re-organization after 9/11, he’s the number one intelligence official in country. He oversees the CIA, the National Security Agency and they looked through everything because of President Trump’s clear affection and reliance on Putin and said, “This just doesn’t add up, doesn’t make sense.” They did not find proof, but for Coats the suspicion endured.

GAYLE KING: You know, Bob, you spoke at length with the President about race relations in this country. He said this: “I don’t have to be Black to understand the black point of view.” Now, to me, it’s different when you read the words and you hear the words. Because you can get the tone and the inflection. Did you get the sense in your conversations that he understands the pain that Black people in this country are going through right now?

WOODWARD: When I explicitly asked him, “Do you see that anger and pain that Black people have and particularly for somebody like myself, somebody white privilege, somebody like Trump, I said, you know, “we got to get out of our shoes and really understand this” and Trump mocked me. This tape is out. He said, “Boy, you’re really drinking the Kool-Aid and just listen to you” and he said he did not have that feeling that it was his job to understand somebody else’s pain and anger. I know as a reporter it’s my job to try to do that. I would argue passionately it’s the President’s job.

KING: He also says that he doesn’t want to create panic and that’s one of the reasons why he didn’t —  that he wasn’t more forthcoming about what he had been told about this virus. Some people say creating panic can be his calling card. Lindsey Graham said that “You cannot win, Mr. President, if you go with the law and order strategy” that he seems to be mounting right now. And there are ads right now running where he says, you know, America is burning literally and accusing Biden supporters of that. Do you think that the President likes creating chaos? At one point in the book Jared Kushner says, “Controversy elevates the conversation.” That he likes being disruptive.

WOODWARD: Yeah. Isn’t that really interesting that this whole idea controversy elevate the message. In other words, when the President says, “It’s the best economy in the world, the best economy that America has ever had,” that’s not true. It was a good economy before the pandemic. But it was not the best in the 1950s and so forth. It was better.

KING: Bob, I want to get in this. Tony just said he’s already said your book is boring. He’s tweeted about that. He called you a whack job. He said this was a hit job. The book is fake. Do you think his words on social media is more important than the facts than you’re telling in book?

WOODWARD: You know, I was thinking about this last night. And what am I trying to say in this book? I’m trying to say to people this is what I found. I know lots of Trump supporters, business people, financial advisors, workers, military, law enforcement. I’m not saying you have to see it as I saw it. People are going to see it in a very different way and I read a column this morning — I’m sorry but I think this is important — somebody said, “Well if you don’t look at it the way they look at it they way they look at it, you’re not decent.”

DOKOUPIL: Mr. Woodward, I’m sorry we’re going to be taken off by the computer. Thank you for joining us. Rage is on sale today.