CBS: Trump ‘at War With Scientists,’ ‘Fighting the Science’ 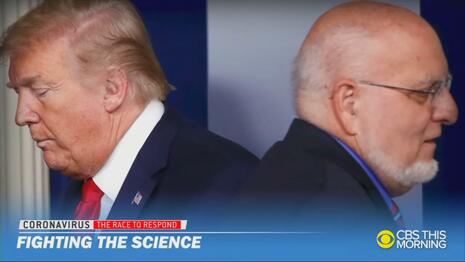 CBS This Morning journalists on Thursday used the most hyperbolic language possible as they weighed in on Donald Trump’s dispute with his CDC Director over the timing of a COVID vaccine. Reporter Weijia Jiang attacked, “This is not the first time President Trump has been at war with scientists. But this time he unequivocally threw his own CDC director under the bus.”

Co-host Anthony Mason opened the show by insisting, “Fighting the science. President Trump bluntly contradicts his own CDC Director on the timing of a vaccine and the importance of masks. How this extraordinary clash unfolded.”

Later, the co-hosts talked to Doctor Tom Frieden, the CDC Director under Barack Obama. Co-host Tony Dokoupil encouraged Frieden to bash his successor:  “In 2018 when Dr. Redfield took the job, he choked back tears as he vowed to maintain the integrity of the agency as a data-driven science organization. Do you think he’s kept his promise?”

Frieden compared the current CDC to… mobs attacking statues in the streets?

CBS This Morning on Thursday was sponsored by Chase Bank and Ancestry.com. Click on the links to let them know what you think.

ANTHONY MASON: Fighting the science. President Trump bluntly contradicts his own CDC Director on the timing of a vaccine and the importance of masks. How this extraordinary clash unfolded.

MASON: President Trump is bluntly contradicting CDC director Dr. Robert Redfield in an extraordinary public disagreement. Redfield told Congress that wearing a mask may protect more people from COVID than a vaccine will and that a vaccine is still months away. A few hours later, the President said Redfield was confused, and he insisted that a vaccine could be ready for the general public as early as next month. Weijia Jiang is at the White Wouse. Weijia, these were pretty remarkable statements by the President.

WEIJIA JIANG: Good morning, Anthony. This is not the first time President Trump has been at war with scientists. But this time he unequivocally threw his own CDC director under the bus. The President considers a COVID-19 vaccine a crown jewel of his response, and with 46 days left to go before the election, it’s no surprise he rejects any assessment that it could take longer than he wants.

DONALD TRUMP: It was an incorrect statement.

JIANG: President Trump insisted CDC Director Dr. Robert Redfield was wrong when he testified under oath that the general public may not have access to a COVID-19 vaccine until later next year.

JIANG: Redfield did not look or sound confused at all.

DR. ROBERT REDFIELD: If you’re asking me when is it going to be generally available to the American public so we can begin to take advantage of vaccine to get back to our regular life, I think we’re probably looking at late second quarter, third quarter, 2021.

JIANG: The President offered a much earlier date.

REDFIELD: Face masks, these face masks, are the most important powerful public health tool we have. They are our best defense. I might even go so far as to say that this face mask is more guaranteed to protect me against covid than when I take a COVID vaccine.

TRUMP: As far as the mask is concerned, he made a mistake.

JIANG:  After Mr. Trump’s briefing, Redfield issued a statement that did not say he misspoke about vaccines or masks which he continued to call part of the best defense. The President who has admitted to intentionally downplaying the virus which has killed almost 200,000 Americans, was asked why people should believe him instead of Redfield.

TRUMP: Because of the great job we’ve done.

JOE BIDEN: Let me be clear: I trust vaccines, I trust scientists, but I don’t trust Donald Trump. At this moment, the American people can’t either.

JIANG: Yesterday’s drama overshadowed the CDC rolling out a new playbook that outlines how to start distributing a free vaccine 24 hours after the government approves one. President Trump also confirmed another White House staffer tested positive for the virus, though he did not come in contact with that person. The President still refuses to follow his own administration’s guidelines about big crowds. And tonight he plans to hold another campaign event in the battleground state of Wisconsin. Gayle?

TONY DOKOUPIL: Only on CBS This Morning, we are joined now by former CDC director Dr. Tom Frieden. Dr. Frieden, good morning to you. Exactly the person we want to talk to today.

TONY DOKOUPIL: The CDC is considered the gold standard in public health. It’s been at the forefront of every prior public health issue in this country. But now with the coronavirus we’ve seen it sidelined. There are reports of scientific guidance being revised by political appointees. Now for the second time, you have the President contradicting the head of the CDC. How concerned are you about all this?

DOKOUPIL: There are a lot of questions about the credibility of the CDC at this moment in time. In 2018 when Dr. Redfield took the job, he choked back tears as he vowed to maintain the integrity of the agency as a data-driven science organization. Do you think he’s kept his promise?

DR. TOM FRIEDEN: Well, when I look at things on the CDC website that aren’t scientifically justifiable and were written not at the CDC headquarters in Atlanta but in Washington by people with no special experience in public health, I look at that as almost like someone vandalizing a national historic monument and writing graffiti on it.

DOKOUPIL: What does Dr. Redfield need to do to reassure the American public that politics is not going to influence the information on the CDC website and also the broader vaccine push?

KING: Yeah, one of the things that the president said that Redfield was confused about was about masks. When he said that masks offer more protection than a vaccine. Where do you stand on that?