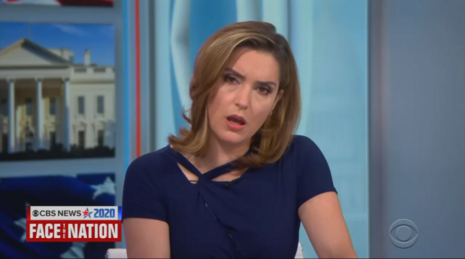 After omitting Susan B. Anthony from her Sunday Morning segment on the 100th anniversary of women’s suffrage, CBS host Margaret Brennan was in a fighting mood later on Face the Nation. Between smearing Republicans as being totally fine with 170,000 COVID deaths and assailing disgraced former FBI Director James Comey on behalf of the Democratic Party, Brennan was positioning herself to be a staunch pugilist for the party.

Brennan’s first guest was Republican National Committee Chairwoman Ronna McDaniel and she wasted little time in trying to suggest that somehow the party sent Secretary of State Mike Pompeo to Israel on some sort of taxpayer-funded campaign trip:

The AP is reporting that the secretary of state, Mike Pompeo, will be addressing the forum from Israel, where he is on official business. This lineup, when you start hearing about cabinet members being involved – I mean, first of all, it’s very unusual for a diplomat to get involved in domestic politics, but this starts to look like using taxpayer-funded, federal resources for a campaign. Will taxpayers be reimbursed?

And despite the fact the Biden campaign had supporters gather outside the Democratic National Convention on the final day, Brennan was fuming over reports that the GOP would have some people at their convention. “I heard you have something like 300 people gathering there for official business. How are you going to protect them all from COVID? This is a mass gathering,” she whined without asking for context.

Then, in an attempt to paint all Republicans as abominable monsters, Brennan cited a ridiculous CBS poll that claims 73 percent of Republicans found 170,000 coronavirus deaths “acceptable.” Here are her nonsensical smears (Click “expand”):

BRENNAN: I’m going to ask you about some of our data that we just got. CBS News has a battleground tracker out, and it is showing a big divide between how Republicans view the U.S. response to the coronavirus and how the majority of voters see it.

How could that number be acceptable, and why is there such a big divide how Republicans see it and how the majority of people do?

“Well, I think that is a really unfair poll,” McDaniel rightly pushed back. Even with the Chairwoman explaining how “Republicans do not want to see people suffering from this pandemic,” Brennan disgustingly insisted and shoved words into McDaniel’s mouth: “So, you say that number is acceptable?”

McDaniel shot back, declaring: “No, of course not, Margaret. This is a global pandemic. Nobody wants to see somebody die from this. I have had friends die from this.”

The two battled over what President Trump did to try to slow the spread of the virus, but Brennan shifted gears and suggested Republicans didn’t care about black lives (Click “expand):

One area where Republicans also differ from voters overall is on the Black Lives Matter movement. Most voters nationwide agree with the ideas of it, while most Republicans — two-thirds of them strongly disagree. Eight in 10 Republicans think there has been too much attention on the issue of discrimination.

The RNC Chairwoman expertly spelled out how “there is a big distinction between the words black lives matter and the movement, which has been led by people who embrace Marxism, who said on networks ‘we want to burn this country down.’”

Later in the show, Brennan spoke with disgraced former FBI Director James Comey and assailed him on behalf of the DNC. Ignoring how an former FBI lawyer recently pled guilty to fabricating evidence and lying to federal judges to get a FISA warrant on the Trump campaign aide in 2016, Brennan grilled Comey on why he didn’t let the DNC know about Russia hacking their email server.

And ignoring congressional testimony from former Deputy Attorney General Sally Yates about how Comey went “rogue” in the Michael Flynn case, Brennan chided him for tweeting out a picture of himself supporting the election of female candidates. Of course, she did it for Hillary Clinton (Click “expand”):

But it drew this response, that we just put up for our viewers, from Hillary Clinton, who is just sort of making a smirk. I know she said in the past she thought he was on the verge of winning in 2016, until you reopened that e-mail investigation.

Do you see this has contradictory? Do you regret what happened then because she clearly sees this as a contradiction for you to say now?

Between CBS political correspondent Ed O’Keefe actively running interference for the Biden campaign and now Brennan acting a Democratic Party pugilist, the network was not afraid to expose themselves as the hacks they really were.

This offensive showing on behalf of the Democratic Party was made possible because of lucrative sponsorships from Walmart and Uber. Their contact information is linked if you want to tell them about what they’re funding.