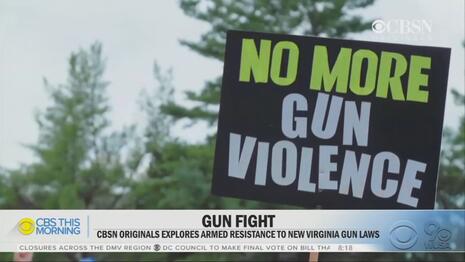 Is this what the media mean by post-election “unity?” CBS This Morning on Thursday previewed a new CBSN (their online platform) documentary on gun control and the threat of “self-identified militias.” As expected, the hack, anti-Second Amendment reporting compares “gun safety laws” with militia gun nuts. Co-host Anthony Mason previewed, “Adam Yamaguchi embedded with militia members and spoke with activists fighting to stop gun violence.”

A civil rights advocacy group? This is the same organization that labeled the Family Research Council (FRC) a hate group. It’s the organization that Floyd Lee Corkins used as a source in 2012 when he stormed the FRC offices and attempted to murder employees.

Co-host Gayle King saw the group of people who run around in the woods as a threat to Joe Biden: “Do you have any sense on how they are reacting to the election results? And have they accepted Joe Biden?”

Yamaguchi again framed the battle as one between “gun reform” and militia types.

Let me speak to Virginia, which is where we spent a lot of time with militia members. The formation of these militias was a direct response to the introduction of a raft of gun bills that wound its way through a newly elected Democratic legislature and a Democrat governor, whose priority when they were first swept into power in 2019 state elections was to introduce gun reform.

This anti-Second Amendment propaganda was sponsored by Progressive Insurance. Click on the link to let them know what you think.

A partial transcript is below. Click “expand” to read more.

GOVERNOR RALPH NORTHAM: It’s unforgivable to turn our schools, our churches, and synagogues and mosques into battlefields.

MASON: They come for our throats. We need to fight back fire with fire, just like he said.

SECOND MAN: If we keep going down the path we’re going down in Virginia, if assault weapons are banned, that’s tyrannical, and our state motto is Sic Semper Tyrannis. Loosely translated, death to tyrants.

WOMAN: The Second Amendment can be regulated. Regulations have been recognized as being constitutional.

MASON: Adam Yamaguchi joins us now. Good morning, Adam. Why are these armed militias becoming so much more visible around the country right now?

YAMAGUCHI: Yeah, let me speak to Virginia, which is where we spent a lot of time with militia members. The formation of these militias was a direct response to the introduction of a raft of gun bills that wound its way through a newly elected Democratic legislature and a Democrat governor, whose priority when they were first swept into power in 2019 state elections was to introduce gun reform.

Now these Second Amendment activists say that they were essentially pushed against a wall, that they had to form militias, as their only form of recourse. Now, the other factor here is that COVID-19 shutdowns have brought together sort of a disparate group of people, anti-maskers, COVID deniers, and people who simply want the economy to open back up, in protest. And chief among them have been these militia groups, who say that they are fighting against what they call tyranny, and they point to the events of the last several months as evidence that, one, the government is out to curtail your freedoms, and two, the only way to protect yourself from tyrants and from other protesters is to be heavily armed.

GAYLE KING:  Do you have any sense on how they are reacting to the election results? And have they accepted Joe Biden?

YAMAGUCHI: Sure. Curt, the firearms instructor we saw in the clip we just played, has expressed strong support for Trump and his refusal to concede. And this seems to be a fairly widely held view amongst militia members. And they also do believe, they are not willing to accept Biden as the president because they bought into a lot of the conspiracy theories that President Trump has peddled in the runup to the election and since.

MASON: Adam, we see you in this thing. In this piece talking about seeing them shoot at what they call a threat, threat, threat. And as you say, you don’t know what that threat is. So I’m wondering sort of what’s the trigger point for these groups?

YAMAGUCHI: You know, they have been vague about who or what that threat is. It certainly is somewhat alarming in these times to hear that and to see these groups coming together and training in the woods. You know, when asked whether there is any armed uprising in the works, they say no, that they are not planning any sort of armed uprising. At least not as a militia, not now, and not that they’re telling us. But what is worth pointing out, though, is that 20 of the leaders of these militias have had their Facebook and Instagram pages disabled fairly recently. This seems to be part of a larger Facebook crackdown that’s disabled over 6,000 pages affiliated with militias, anarchist groups, and Qanon if they discuss potential violence.