Election Night 1, of possibly several more election nights, is over and the race between President Trump and former Vice President Joe Biden has become nail-bitingly close, much to the pain of both sides. This especially didn’t sit well with Hollywood lefties who felt robbed of the “blue wave” that the polls had promised. 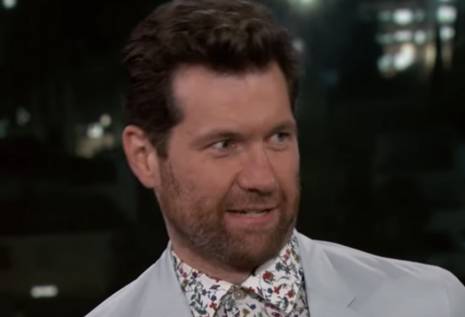 Both Say Anything actor John Cusack and Lion King actor Billy Eichner fumed over the fact that Biden didn’t absolutely run away with the election. After all, some polls said that Biden had a 90% chance of taking the White House.

Though, shouldn’t these morons have learned a thing or two about polls since 2016’s election?

As results started coming in on election night, Cusack tweeted furiously about the race being as close as it was. It seems he wasn’t expecting it: “fact this is close is an utterly damning  portrait of decadence & decay : these aren’t votes for policies or ideologies,” the actor wrote.

Clearly Cusack’s in a bubble if he’s shocked that there are millions who don’t agree with his aggressive Bernie Bro politics.

He also added that Trump voters are voting for the purpose of allowing for Trump to continue killing Americans: “They are votes for a man who’s mentally ill & killing people in a pandemic & a child abducting rapist & rascist[sic].” Yeah, to call Cusack’s tweet insane would be putting it mildly.

He then gave a dire diagnosis of America, saying that its “soul” is “deathly sick.” The only way we could fix it is to elect Biden, of course. That was another typical tantrum for Cusack. The election didn’t go the way he dreamt, so therefore the country is damned. Talk about entitled. 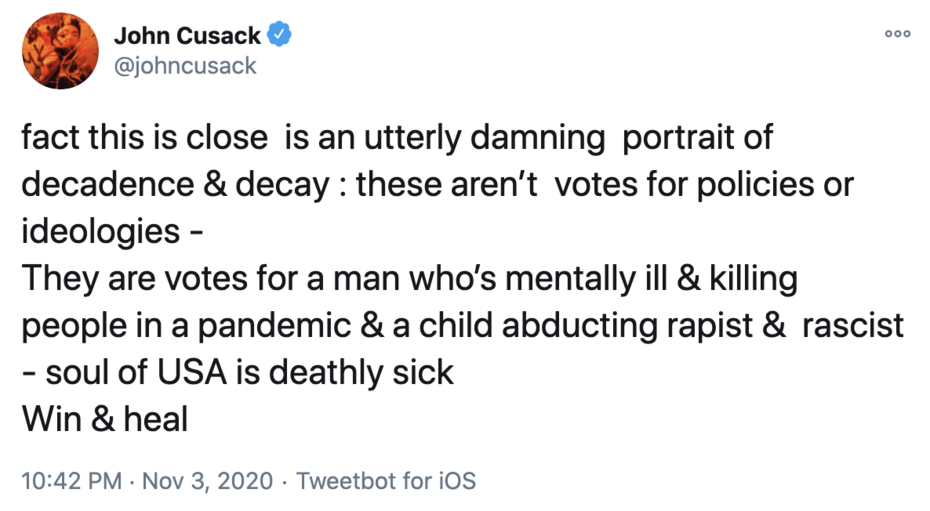 In the wee hours of the morning after the election, Eichner revealed that he had been placing his hopes in the polls. Though by now he has no excuse for doing so and should only blame himself for the disappointment. The actor and comedian tweeted, “Remember the polls in WI that had Biden up by 10? Even more? ARE YOU POLLING FICTIONAL CHARACTERS???”

Again, like in 2016, the polls promising sweeping Democrat victories didn’t pan out. So far, the 2020 race shows Trump well within striking distance of Biden, who desperately needs Pennsylvania for victory.

With all these celebrities’ constant gloating about a Biden victory and repudiation of Trump’s “hate,” they must hate that they’re still in suspense about whether Trump will get re-elected.