Boston Celtics’ player Enes Kanter told Michael Jordan, LeBron James and Nike co-founder Phil Knight to put their money where their mouths are. He urged them to tour slave labor camps with him in China. These are the locations where people are enslaved for the production of the products these multi-millionaires are making huge profits from.

A few days earlier, Kanter had posted a tweet criticizing China and its leader, Xi Jinping, for denying the human rights of the oppressed Muslim people in the slave labor camps and demanding China free Tibet. China responded to Kanter by banning all Celtics games from being broadcast in that communist nation.

Now Kanter has upped his game. He has since tweeted to Knight: “How bout I book plane tickets for us and let’s fly to China together. We can try to visit these SLAVE labor camps, and you can see it with your own eyes.” 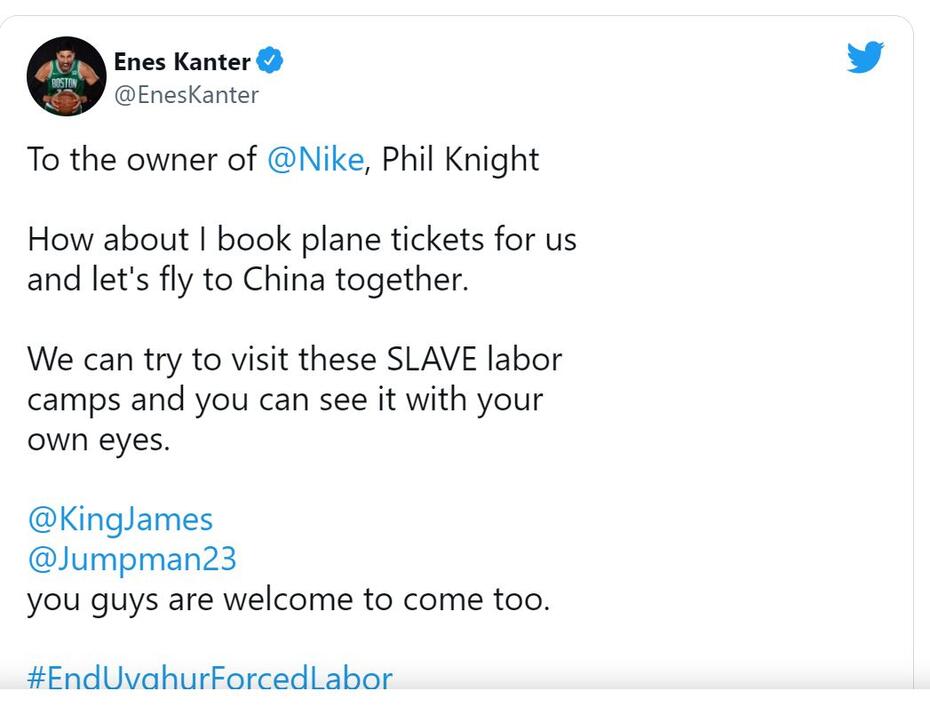 Also invited by the bold and courageous Kanter – standing alone among athletes against the spineless corporate powers, as he is – were James and Jordan. They’ve been making a king’s ransom in profiting off the backs of China’s slave laborers for a long time. At the same time, they turn blind eyes away from the oppressed people who make them rich.

Furthermore, Kanter stated in a social media video that Nike stands with Black Lives Matter, Stop Asian hate. LGBTQ and Latin communities, but when it comes to slaves in China (who have no political power) it remains silent and does not address brutality.

Additionally, Kanter says: “You do not say a word about brutality in China.” Uyghers are forced to work long hours and are kept under surveillance. This is one of the worst human rights violations in the world, he says, while demanding China stop the “modern day SLAVERY now!” He calls Nike hypocritical, says someone must teach China a lesson and the commies there cannot buy him off. “Bring it on!”

Kanter also wears “freedom shoes” directing strong language at China and vowing it will never be able to buy off his protests.

Fox Business reports that neither Nike nor Jordan have responded to Kanter, and James could not be reached for comment.

The United States State Department classified China’s oppression of Uyghurs as “genocide.” More than a million Uyghurs have reportedly been detained in re-education camps. They are considered a nomadic Turkic people, making the issue all the more personal for Kanter, a native of Turkey.