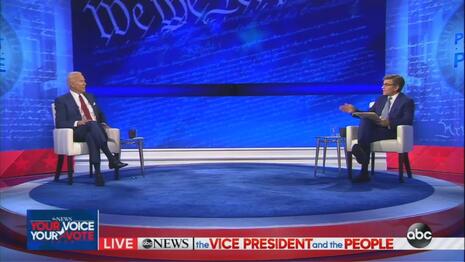 On Thursday night, ABC News cowardly refused to engage in even the most basic, adversarial journalism, refusing to ask former Vice President Joe Biden during their 90-minute town hall about his son Hunter Biden’s latest reported acts of corruption.

This in-kind donation to the Biden campaign came a day after Facebook and Twitter committed Orwellian and un-American behavior in enacting widespread censorship of bombshell New York Post reporting about Hunter (and a follow-up), including e-mails from a Burisma executive thanking Hunter for having setup a 2014 meeting with his famous father.

ABC’s town hall featured 11 audience member questions (across nine topics) and 19 comments/questions/queries from chief anchor and former Clinton official George Stephanopoulos, but none touched on a story so revealing that the leftist media and tech racket have falsely deemed it to have been hacked material.

For a specific breakdown of the partisan affiliation of the audience members, their questions, and utterances from Stephanopoulos, stay tuned to NewsBusters. This post will be updated with a link when we bring that news to you later tonight. In a bit of a spoiler alert, the comments and questions from both audience members and Stephanopoulos skewed heavily to the left.

The Biden town hall touched on the black votes, civility in America and our political arena (x2), coronavirus (x2), the 1994 Crime Bill, LGBTQ rights, the Supreme Court, taxes, and world peace, but none could even utter names and words like Burisma, e-mails, Hunter Biden, and/or the New York Post.

But seeing as how the paper founded by Alexander Hamilton has apparently been overtaken by Russia and Vladimir Putin (as the left wants you to think), ABC and Stephanopoulos made sure to ignore Hunter all together to avoid scorn from their friends in the Biden campaign.

Since Stephanopoulos seemingly didn’t want to trigger anyone with the story, we’ll print the lede five graphs from the Post’s story (click “expand”):

Hunter Biden introduced his father, then-Vice President Joe Biden, to a top executive at a Ukrainian energy firm less than a year before the elder Biden pressured government officials in Ukraine into firing a prosecutor who was investigating the company, according to emails obtained by The Post.

The never-before-revealed meeting is mentioned in a message of appreciation that Vadym Pozharskyi, an adviser to the board of Burisma, allegedly sent Hunter Biden on April 17, 2015, about a year after Hunter joined the Burisma board at a reported salary of up to $50,000 a month.

“Dear Hunter, thank you for inviting me to DC and giving an opportunity to meet your father and spent [sic] some time together. It’s realty [sic] an honor and pleasure,” the email reads.

An earlier email from May 2014 also shows Pozharskyi, reportedly Burisma’s No. 3 exec, asking Hunter for “advice on how you could use your influence” on the company’s behalf.

The blockbuster correspondence — which flies in the face of Joe Biden’s claim that he’s “never spoken to my son about his overseas business dealings” — is contained in a massive trove of data recovered from a laptop computer.

This willful censorship was made possible with the support of advertisers such as (but not limited to) Apple/Verizon, Nature’s Bounty, Prudential, T-Mobile. Follow the links to the MRC’s Conservatives Fight Back page.