Pastors are belatedly coming to the conclusion that letting Caesar decide when and where they can worship was a bad idea from the beginning. The fact the vast majority of churches meekly shut down and surrendered Easter demonstrated how deeply secular culture has penetrated the pastorate. 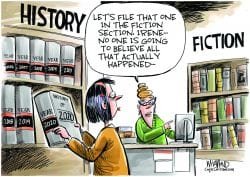 These collaborationists forgot the one time Jesus lost his temper was when secular concerns were interfering with the worship of God inside the Temple. Pastors evidently confused meek with weak and that faulty thinking dominated their Flu Manchu decision–making.

The rush to surrender to secular authorities and be good little church people was positively French in its intensity.

These so–called shepherds surrendered a constitutional right to worship like it was an expired handicapped parking tag. Instead of outsourcing outreach to St. Facebook, pastors should have kept their churches open. Urging the frail elderly and those with underlying conditions to stay home and watch, while the healthy gathered together as Christians are instructed to do.

During the week, the staff could’ve visited elderly parishioners in person and prayed through the storm door. That would have been much more work than the virus vacation the clergy opted to take. More important, it would have been biblical.

Now a few pastors are beginning to understand that if Costco can remain open, so can church.

It took him until July, but in California Dr. John MacArthur, pastor of Grace Community Church, finally announced, “We will obey God rather than men. We’re going to be faithful to our Lord. We’re going to leave the results to him.”

“We stand firm to continue fulfilling our biblical mandate from Christ to proclaim the Gospel and assemble together, and I earnestly hope that our stance will encourage other pastors, churches, and the general public across America and the world to also stand firm for biblical Truth,” MacArthur said in a statement. “Church is essential.”

The big problem with that announcement is timing. MacArthur is six months late. Prominent pastors and denominations should have met in March and announced that Christians would continue to worship, as is their right guaranteed by the Constitution, and each church would make Kung Flu mitigation efforts on its own.

The Flustapo specializes in making life miserable for individuals and the disorganized. You didn’t notice health officials requiring masks on mostly peaceful looters. A massive pushback from believers would have saved Easter and established that Christians will suffer no infringement on their duty to God.

Also in California, Pastor Rob McCoy of Godspeak Calvary Chapel didn’t surrender Easter, but he mistakenly thought a little going along would mean getting along.

When BLM riots were deemed essential and church wasn’t, that was enough. McCoy told Just The News, “Who would ever have thought you’re standing on the front lines because you’re going to church on a Sunday?”

McCoy defied a temporary restraining order from the local Caesar forbidding indoor worship. “I’m not being disobedient to anybody, I’m being obedient to God. No government gets in the way of worshipping the one who created us. We’re living on His dirt, breathing His air, drinking His water, eating His food, we’re going to live by His rules.”

McCoy isn’t alone on the front line. A vindictive county government is seeing to that. A lawsuit against the church also includes 1,000 criminals to be named later who will also be charged with McCoy and fined up to $1,000/day.

My favorite response to Flustapo minions took place in little Holly Springs, MS. Cops who worshiped Mammon and not God broke up a Sunday Service at the First Pentecostal Church. Pastor Jerry Waldrop then took his 45 members to the local Walmart, which has never been closed, and held services there.

Now Franklin Graham has decided to enter the belly of the lockdown beast. He’s announced he will lead the 2020 Prayer March in Washington, DC on September 26th.

Graham and his supporters are hoping thousands of believers will show up and march from the Lincoln Memorial to the steps of the Capitol, stopping along the way for prayer for our nation.

Mayor Muriel Caesar isn’t going to like that. As this is written, travelers to DC from 29(!) states are ordered to self–quarantine for two weeks after they arrive. “Mass gatherings” of more than 50 people are forbidden. Face burkas (aka ‘masks’) are required indoors and out.

A camel will pass through the eye of a needle before DC will issue a parade permit for Graham’s march.

It’s time for a showdown with secular anti–Christian authorities and DC is the perfect location. I hope Graham stands firm and thousands march with him regardless of consequences. It’s time for the USA to remember what “prohibiting the free exercise” really means.