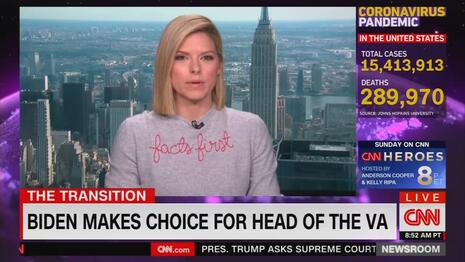 The slogan “Facts First” at CNN has always been a bit of a joke, since anti-Trump and anti-Republican opinions usually are more common than calm statements of fact. CNN Newsroom host Kate Bolduan delighted the leftists at HuffPost and elsewhere by making a “bold fashion statement” — wearing a cheesy “Facts First” sweater on the air on Thursday morning.

Facts are facts.
They aren’t colored by emotion or bias.
They are indisputable.
There is no alternative to a fact.
Facts explain things.
What they are, how they happened.
Facts are not interpretations.
Once facts are established, opinions can be formed.
And while opinions matter, they don’t change facts.
We stand with our friends at CNN who start with the facts first.

Much of Bolduan’s show on Thursday dealt with the coronavirus vaccine, but CNN’s usual “Opinion First” method with the Republicans erupted in an interview with John Kasich, who spoke at the Democrat convention and endorsed Joe Biden for President, but he’s bizarrely still proclaiming he’s a “conservative Republican.” Endorsing a liberal Democrat like Biden is not a “conservative Republican” act. Kasich, like CNN, simply hates Trump, and getting rid of him was more important than anything else.

That hateful emotion and bias triumphed over facts as Bolduan and Kasich were both marveling at the soon-to-fail Texas lawsuit alleging voter fraud and they then trashed the current state of the GOP, which supposedly has no identifiable positions any more:

BOLDUAN: But you have got, at its basic, most basic you have states telling other states how to run their elections or they’re trying to. And I am struck by, if that is where Republican principles and ideals are right now, where is this headed for the party.

BOLDUAN: I am not saying — I’m saying some Republicans.

BOLDUAN: That’s been our ongoing joke. You’re the last Republican in the country that still cares about the deficit and debt. That’s been, sadly, an ongoing joke that you and I have discussed.

KASICH: Kate, some people say, well, what happened to Kasich? Is he changed? No, I didn’t leave the party, the party left me. I have been a free trader. I have balanced budgets. I’ve cut taxes. I care about people that don’t have much. I care about the environment. I’m a conservative Republican. The rest of these people, they’re out to lunch.

That’s not what Kasich said for the Democrat convention. He said he was taking off his partisan hat: “Joe Biden is a man for our times, times that call for all of us to take off our partisan hats and put our nation first for ourselves, and of course for our children.”