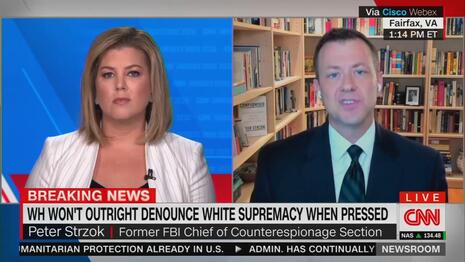 If you have an anti-Trump book or view to hawk, CNN would love to have you on. This was the case when CNN Newsroom host Brianna Keilar hosted disgraced FBI agent Peter Strzok to scold and bash the President. “I worry about what the President is doing across the board to the United States government, to the leadership of that” he warned.

The disgraced former FBI agent has a well-known history of attacking and conspiring against the President, including having been fired for anti-Trump messages. Keilar ignored that and the fact that he has not been in the FBI for two years when asking him about current FBI investigations and President Trump’s impact on the nation.

He was quick to call out the President as a “danger to national security:” “[W]e see in sort of a revelations of his tax records showing all this financial exposure to foreign nations but it presents a picture of a man who is in fact a danger in my opinion to the U.S. national security.”

They ignored the many questions raised about The New York Times report that allegedly received President Trump’s tax returns in favor of parroting Joe Biden’s talking points. The host instead let her guest run amok with accusations and attacks.

Later, both joined the ongoing parade of people chastising President Trump for not denouncing white supremacy the way they demanded him to. There have been numerous reports to the contrary, yet the leftist media has continued this narrative. Strzok declared, “We have to have the sort of leadership coming from the top of our nation all the way down in our government, in our society saying this is not acceptable.”

Keilar continued the ongoing trend: “We hear the White House say over and over, he has denounced it but when I think of the occasional denunciations it is like pulling teeth. … Sure is not a denunciation, right? That is not a clear word.”

Strzok continued stating Trump has undermined faith in the election and aided Russia in their disinformation campaign. As someone who worked with Robert Mueller on his probe, he should know there was no sign of collusion, but he still continued the narrative.

Joe Biden and the rest of the Democratic Party would be very happy with this segment, but honest journalism shouldn’t.

This attack from the media was sponsored by Nutrisystem and Crest. Click on the links to let them know what you think.

A transcript of the October 1 coverage is included below:

KEILAR: I want to talk about the national security implications with this with Peter Strzok. He served as the chief of the FBI’s espionage section before he was fired from the agency in 2018 after inflammatory text messages he made about the President were revealed. He’s now suing the justice department saying that his firing was politically motivated. He is the author of the book “Compromised: Counter intelligence and the threat of Donald Trump.” Peter you write in the book, quote, I don’t feel that I have the option of keeping quiet about the clear and present danger to our national strategy. Considering recent developments, just a few of them: False claims about voter fraud. Failing to denounce the threat of white supremacy in a very clear way. Do you think the President is a national security threat?

PETER STRZOK [Former FBI Chief of Counterespionage Section]: Brianna, thank you for having me. Yes, I do. I started in the FBI mid-’90s and I worked the beginning of my career against the domestic terrorism group particularly dealing with violent white supremacists groups and time after time again, academic research and the investigations we saw proved time and again that this sort of acknowledgement certainly from anybody in a position of power is both a powerful recruiting tool and we see that going on right now from these groups and more insidiously it sort of builds an acceptance within the general kind of mental state of America that something as hideous and terrible as violent racist extremism is somehow okay and for the President to be saying that is really damaging and more than a societal damage. That is a damage to the nation as a whole. And then of course that’s just one facet of every we see in sort of a revelations of his tax records showing all this financial exposure to foreign nations but it presents a picture of a man who is in fact a danger in my opinion to the U.S. National security.

KIELAR: I want to talk to you about his financials in a moment but just back to your point about domestic extremists, and this is obviously something as you said you have experience with, when the department of homeland security has a draft assessment saying white supremacists are most lethal threat to the U.S., what are the concerns that the FBI would have about how that could play out?

STRZOK: Well I think the FBI has the knowledge through investigations of looking at all the incidents of violence within America and if you look at the mass shooting events, the preponderance of the attacks has taken place by individuals who have some link or basis of a link to ideology that involves some sort of racial supremacy, that’s concerning because that is what’s a lot of these cases driving people towards violence and it is something we absolutely have to be taking a stand against. The FBI can investigate and the Department of Justice can prosecute it but it takes more than that. We have to have the sort of leadership coming from the top of our nation all the way down in our government, in our society saying this is not acceptable. Racial violence is not who we are and any instance of it should be snuffed out and stifled and denounced, not accepted, not the things we hear from the President.

KEILAR: So explain why it is so clear or why it’s so important for the President to be clear. We hear the White House say over and over, he has denounced it but when I think of the occasional denunciations it is like pulling teeth. Under considerable pressure a couple days after Heather hire was killed in Charlottesville. Sure is not a denunciation, right? That is not a clear word. Explain why even as the White House insists people want to dictate the language of the President should use, why clear language is so important.

STRZOK: He shouldn’t be issuing apologies. The first thing he said should be denouncing it. He should not give the muffled excuses. When he talked about Charlottesville he said there’s good people on both sides of the issue and that’s reprehensible. Similarly when he talks or referencing the proud boys to stand by, that’s unacceptable. It’s not enough to have an explanation afterwards. That’s not okay. In the first stance he should be seeking to tamp down unrest, seeking inclusion, he should be denouncing. How’s it objectionable, how can it be problematic to say I’m against racial violence? To have any other position at all is simply unacceptable with what we stand for as a nation and every person needs to think through what it is coming out of the mouth of the President of the United States.

KEILAR: Peter, is there voter intimidation? What role does the FBI have in this right now?

STRZOK: I think it’s certainly casting doubt on the efficacy of our voting system. Academic research around the U.S. very recently has shown that mail-in voting is amongst the most secure way we have as a nation to cast our vote so when he the President gets up there saying he sees the instances of fraud which don’t exist in reality, there is no data, no evidence to support his assertions, what he is doing, one, undermining the faith of Americans in the electoral process. Two, laying the groundwork for contesting the election. Third, most disturbingly, this is the sort of disinformation that Russia among other people push into the social media right now so when you see the things lining up, when something isn’t supported by the facts, isn’t possible based on research thats being done and then at a third time a hostile foreign nation working to re-elect President Trump is saying exactly the same thing, that is an extraordinary concerning combination of factors.

KEILAR: The President has as I’m sure you’re well aware criticizing the FBI director Chris Wray who has speaking honestly about Russian interference, no widespread voting fraud and about the White Supremacy here in the U.S.. Do you worry that the President could fire Wray?

STRZOK: Well, I worry about what the President is doing across the board to the United States government, to the leadership of that. Certainly director Wray confirmed to congress that Russia was working right now to denigrate Vice President Biden and there by assisting in helping President Trump. I look at some of the reporting coming out that there was a CIA survey that concluded that Vladimir Putin himself was likely personally directing the interference to aid President Trump’s re-election, drawing on more than three dozen pieces of information and I can’t imagine the pressure on the leadership of the CIA right now but when you go time and again across the government institutions trying to stand up against manipulation and as a result threatened by innuendo, of course I’m worried and all of America should be worried any time we see the President placing undue pressure for anything other than the truth.