CNN Expresses Outrage: Barrett Will Not Be a Liberal Judicial Activist 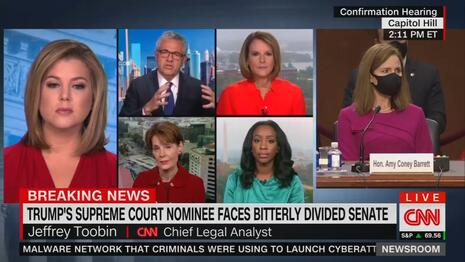 CNN concluded its day one coverage of Amy Coney Barret’s confirmation hearing by expressing outrage over her stance on judicial activism. After gushing over Democratic Vice-Presidential Nominee and  Kamala Harris’s opening statement, CNN weekday host Brianna Keilar brought in a panel to attack Barrett for following in the philosophy of the late Justice Scalia.

It has long been a part of constitutional theory that some matters should be left to the State governments or to the people to decide thanks to 9th and 10th Amendment. Toobin and his fellow panelists completely ignored this in favor of the liberal interpretation of the 14th amendment held by the late Justice Ginsburg.

Pretty much anything that went against the Democratic narrative and wish list was ignored by the panel. Since the decision of Marbury v. Madison in 1803, the Supreme Court has regularly struck down laws deemed unconstitutional. This was ignored by Abby Phillip who griped: “… this Affordable Care Act case that will come before the court in November is a case in which congress did legislate and the federal government now wants to invalidate that law.” The Supreme Court is supposed to judge cases based on its constitutionality and not on what the Left or CNN wants them to.

This did not stop Toobin from bemoaning:

They are demanding the Supreme court of the United States throw the whole thing out, with no replacement. I mean, it’s so outrageous, of all issues to be exercised about, about policy making from the bench, the Trump administration, having failed over and over again to come up with a replacement for Obama care, is simply throwing it on the courts saying you get rid of it and maybe something good will happen result.

Not only did the leftist panel attack the Supreme Court nominee for her judicial philosophy, but accused her of a potential conflict of interested. CNN chief political analyst Gloria Borger speculated “… the question that I think has to be raised to her, would you recuse yourself from election cases? … I doubt they’ll get a direct answer about it, but I think the public deserves to hear it.” The public also deserves an answer to whether Joe Biden supports packing the court, yet here we are still unsure of it.

All of these attacks by CNN were replicated throughout the day as Senate Democrats raised the issue of policy-making, health care, and abortion but did not mention Barrett’s credentials.

This CNN bias was sponsored by Liberty Mutual and Tractor Supply Co. Click on the links to let them know what you think.

A transcript of the October 12th Coverage is included below:

BRIANNA KEILAR: Let’s talk about what we just heard from the nominee to the Supreme court Amy Coney Barrett … it was interesting to the end there, Jeffrey, he talked about the different perspectives she will bring, but primarily, the first mother of school-age children, she noted she would be the first Justice from the 7th circuit, and the only sitting Justice who didn’t attend law school at Harvard or Yale. With particular interest, I think we were listening to what she said about her time clerking for Justice Scalia and the similarities she shares with him as how he viewed the law. What did you take away from this?

JEFFREY TOOBIN [CNN Chief Legal Analyst]: I thought the most important passage was when she said the policy choices should be left to the people’s representatives. To the House, to the Senate, to the State legislatures. It’s important to remember what that means in the context of what the Supreme court does Justice Scalia felt like in a state wants to ban a marriage, that’s a policy decision. Just as Justice Scalia thought, that if a state wants to ban abortion, that’s a policy decision a state should be allowed to make. What Justice Ginsburg thought was that the constitutional trumps those policies. The constitution forbids states from engaging in acts that are discriminatory, violating the 14th amendment or the first amendment. So the language of deferring to the policy choices to the states has real political content, and its conservative political content, and it’s what Justice Scalia believed. But people should understand that’s what it means in the real world. It is not just boilerplate. It has real political content.

KEILAR: Joan, what stood out for you?

JOAN BISKUPIC [CNN Supreme Court Analyst]: You know, she’s not running from her record, she is pretty much putting it all out there. In terms of how she is going to interpret the constitution. Her allegiance once again to Justice Scalia, her reference to the power of prayer. She knew her past record on religion, faith, and the law could be controversial. She wants to show herself for who she is, for better or worse, for members of the Senate panel. I think you’re going to see someone who, tomorrow, when she has to field questions, appears just as she did now. Incredibly disciplined, pretty firm in what she’s saying, but with a tone of modesty. I think what the Senators will have to cut through is look at what those consequences will be. She’ll face some hard questions about the affordable care act, but she will — I can see her repeating what she’s doing today, saying this is my philosophy, this is what I’m going to stick to. And in some ways it’s a departure from what we have seen from other nominees who wanted to present themselves as different, noncontroversial, but to Jeffrey’s point, you have to look beyond those words that sound very reasonable and understand the consequences for the law, which, as we had earlier, is the opposite of what Ruth Bader Ginsburg did for the law.

KEILAR: Abby, what did you think?

ABBY PHILLIP [CNN Political Correspondent]: There was that passage whether she talked about how she views the rulings she writes, from the perspective of the losing party. I did think that that was the kind of framing she think being her rulings, to convey to people she will be a reasonable jurist evaluating each decision individually, but then you go to the question of, well, what does it mean to leave policymaking to legislators, in the context of the Affordable Care Act? Which has come up all day long day. I think this is an interesting thing, and perhaps Jeffrey or Joan has insight. Republicans all day long have been saying the court should not legislate. She basically reiterated that idea today, but what we face with this Affordable Care Act case that will come before the court in November is a case in which congress did legislate and the federal government now wants to invalidate that law. So I do think it raises some questions and I this would be borne out later this week about how this whole policymaking is left to the legislature applies specifically to the Affordable Care Act. I think that will be the question of the week.

TOOBIN: I’m just laughing, because Abby is so exactly right on that point. Because you heard this over and over again from the Republican senators, is that, you know, the courts, the Supreme courts should let legislators legislate, not try to solve society’s problems. That we should be the ones to do health care, but what are we doing in the Affordable Care Act case? They are demanding the Supreme court of the United States throw the whole thing out, with no replacement. I mean, it’s so outrageous, of all issues to be exercised about, about policy making from the bench, the Trump administration, having failed over and over again to come up with a replacement for Obama care, is simply throwing it on the courts saying you get rid of it and maybe something good will happen result.

GLORIA BORGER [CNN Chief Political Analyst]: If you’re leaving everything up to the voters, what about her own nomination, which is taking place in the middle of an election? You might be able to say, wait a minute, let’s let the voters speak, as Kamala Harris said, but jamming through a Supreme Court nominee, which is exactly what is going on here. There’s one thing — you didn’t hear from her, and I think it’s going to be asked, this question of whether I see it from the point of view of my opponents, if it were one of my children who lost a case, the question that I think has to be raised to her, would you recuse yourself from election cases? If you’re looking at from the opponent’s point of view? Because, you are being appointed by somebody who has a vested interest in that case. I’m sure the members, the Democrats will be asking that question. I don’t know, I doubt they’ll get a direct answer about it, but I think the public deserves to hear it.

PHILLIP: Just to that point, I really did note. She emphasized she would be an independent Justice on the Supreme court. That stuck out to me, considering how much of a box she’s been put in by this president, on the election, on ACA, even on Roe v. Wade. I think it’s made it this path for her very difficult.

KEILAR: Thank you all for this discussion. I appreciate getting all your insights on this historic moment on Capitol Hill, the confirmation process for Amy Coney Barrett.