CNN FREAK OUT: Camerota Brings on Pence Aide Just to Scream at Him 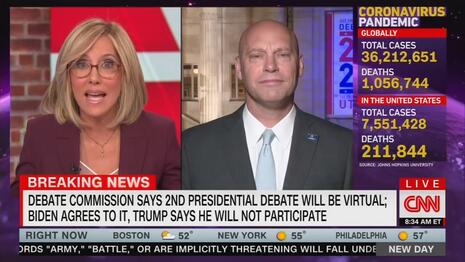 In the wake of the coverage from leftist hacks about Wednesday’s Vice President debate, Vice President Pence’s chief of staff Marc Short appeared on CNN’s New Day to give analysis of the debate. This turned out not to be the case as co-host Alisyn Camerota took the opportunity to attack the administration and President Trump. Camerota began yelling during the segment: “What you didn’t mention is that Vice President Pence has been with people in the past ten days who have tested positive at what might have been super spreader events.”

The issue of the plexiglas dividers that the Commission on Presidential Debates chose to erect between the candidates was brought up. Short brought up factual reasons for why the Vice President was opposed: “Both candidates tested negative, the moderator tested negative, CDC rules say you should have 6 feet of distance, we extended it to 12 feet of distance, medical experts across have come out time and again and said the Plexiglas is meaningless.”

Camerota immediately shouted out “Hold on. Hold on. That’s your side …” and later “Those are your facts.” For a new station that values trusting the science, it is convenient how quick they are to ignore it. This was not the only time the leftist host was challenged by the Vice President’s Chief of Staff.

When Camerota finally decided to talk about the debate, she played a spliced clip on the Vice-President’s first debate answer. Short was quick to point out that she did not play the full clip. The rest of the interview was spent with Camerota demanding an answer on the “failings” of the Trump administration. Short responded with the same analogy that the Vice President gave in the debate, which was look at the handling of H1N1 compared to the handling of COVID.

It is obvious looking at the interview that CNN was not interested in getting analysis on the debate or facts, but to rail against President Trump. Camerota showed unable to handle Short’s logical and calm responses to her questions.

This Leftist Meltdown was sponsored by Ensure and Liberty Mutual. Click on the links to let them know what you think.

ALISYN CAMEROTA: Okay. We have three breaking headlines for you right now in the 2020 race. The debate commission just announced that the next debate between President Trump and Joe Biden will be held virtually with the candidates in separate locations. Then moments ago former vice President Biden agreed to those conditions, and moments before that President Trump refused. Joining us now is Marc Short, he is Chief of Staff for Vice President Mike Pence. Mark, great to have you here with all of this breaking news. Thanks for being up early for us. Why won’t President Trump agree to a remote debate?

MARC SHORT [Chief of Staff to VP]: Well, good morning, Alisyn. Thanks for having me on. Obviously at this hour we have not yet had a chance to talk to the President but you have heard him speak and explain his concerns about a virtual debate. I think our concern consistently has been the debate commission is supposed to negotiate with both sides if they are going to suggest a change in rules and that has not been the case. There are minor rule changes they implemented in the Vice President’s debate at the last minute without consultation and I think this continues to have a pattern of them announcing it without discussing it with both sides. We are hopeful they will actually enter into negotiations so we can hear what their concerns are and there can be a negotiation to hopefully reach a positive settlement because we think it’s important that the American people hear from both candidates.

CAMEROTA: They can still hear from both candidates even if they are remote. If I can speak for the debate commission, I think what their big issue is that a week ago President Trump tested positive for coronavirus. He’s supposed to be isolating. He’s still contagious doctors say. That’s their concern.

SHORT: I appreciate you speaking for the debate commission, Alisyn, but I think the reality is that that debate is still ten days out, it’s not tomorrow.

CAMEROTA: It’s a week out.

CAMEROTA: I think that they get to make the decision. As the Presidential debate commission they get to make decisions and doesn’t it just stand to reason that if one of the candidates was sick they would do what was safest for the public health?

SHORT: Again, Alisyn, I appreciate you taking on the side of the debate commission and representing them –

CAMEROTA: I’m just telling you what the logic is. The logic is that President Trump is sick with coronavirus.

SHORT: The rules are very specific that the sides are supposed to negotiate, Alisyn. It was a small issue here, but we asked repeatedly for any sort of medical justification for Plexiglas, they never provided it obviously the Vice President conceded and said if that’s what makes Senator Harris more comfortable we will go along with that.

CAMEROTA: What do you think the medical justification is for plexiglas, mark?

SHORT: Well, let’s talk through that, Alisyn. Both candidates tested negative, the moderator tested negative, CDC rules say you should have 6 feet of distance, we extended it to 12 feet of distance, medical experts across have come out time and again and said the Plexiglas is meaningless. In fact he University of Utah Epidemiologist told us the Plexiglas is meaningless. If it makes you feel better aesthetically, fine, but it does nothing medically. So that’s exactly the point.

CAMEROTA; Hold on. Hold on. That’s your side. Isn’t the point also that Vice President pence –

SHORT: It’s not my side, those are the facts, Alisyn.

CAMEROTA: Those are your facts.

CAMEROTA: Mark, here is another fact –

SHORT: How can you say they’re cherry picked facts?

CAMEROTA: [Note – She is raising her voice at this point] What you didn’t mention is that Vice President Pence has been with people in the past ten days who have tested positive at what might have been super spreader events.

SHORT: Alisyn, it’s exactly why we did the contact tracing, we did that through both the White House medical unit, we did it extra consultation with the Director of CDC who all felt comfortable with the Vice President moving forward, it’s why he has tested every day, he has continued to test negative.

CAMEROTA: Is he tested every day, Mark?

CAMEROTA: Okay. When was President Trump last tested before his positive result?

SHORT: Alisyn, you will have to ask the President’s team that.

CAMEROTA: Why don’t you know that, mark? You have the Chief of Staff for the head of the coronavirus task force.

SHORT: I am the Chief of Staff for the Vice President of the united States. I’m not privy to access to the President’s medical records.

CAMEROTA: You don’t know when the President was tested negative before his positive result!? You do not know that!?

SHORT: I don’t know when there is a lot of people that have tested negative.

CAMEROTA: I’m talking about the President of the United States.

SHORT: We did for the Vice President to make sure, again, as we walked back through and said here is where he has been, what he has been exposed to, we had clear guidance from the White House medical unit and Director of CDC who said they’re confident with that. What’s most important is the Vice President continues to test negative each and every day.

CAMEROTA: I’m happy to hear that. That’s wonderful. But you can’t blame us for wondering if that’s going to be a constant given how many people in the White House have now tested positive. Every day, mark, there is a new positive test coming out of the White House.

SHORT: And it’s a fair question. –

CAMEROTA: Yesterday it was Stephen Miller.

SHORT: I appreciate you allowing me the chance to answer it.

SHORT: I’m not aware. I’m not aware of anybody. We’ve been here in Salt Lake. It was a great debate last night, I think that’s why you asked me to come on, we were pleased with how the Vice President did, I think he drew a clear contrast to the divisions of our country what it would look like for the Trump/Pence administration to the Biden/Harris administration. –

CAMEROTA: I have a sound bite to play for you.

SHORT: We thought it was a good night.

CAMEROTA: I did want to get your take on what you thought of the debate, obviously.

CAMEROTA: Here is a moment. Let me play this for you and get your response.

SUSAN PAGE: You head the administration’s coronavirus task force. Why is the U.S. Death toll as a percentage of our population higher than that of almost every other wealthy country and you have two minutes to respond without interruption.

MIKE PENCE Susan, thank you. And I want to thank the commission and the university of Utah for hosting this event [the video moved to a new clip] our nation has gone through a very challenging time this year. But I want the American people to know that from the very first day President Donald Trump has put the health of America first.

CAMEROTA: Mark, he didn’t answer it. He never answered it,s a lot of people want to know why is the death toll in the U.S. So much greater than other countries.

CAMEROTA: He never got to it. He never explained that.

SHORT: … Alisyn, are you going to let me answer your question or not? –

CAMEROTA: Mark, you just said we didn’t play the full clip, it was two minutes of him not answering.

SHORT: … Alisyn, one more time, the Vice President answered the question if you played the full clip. But the reality is that requires you to trust the information that’s being provided by Russia, China, Iran, other nations that have had the coronavirus and believe their numbers.

CAMEROTA: So you don’t think that we have the highest death toll, is that what you’re saying?

SHORT: I believe if you’re going to be consistent and trust the numbers then you also have to go back and say that when the swine flu broke out during the Obama/Biden administration there were 14,000 domestic deaths they said there were 18,000 international deaths total. So, therefore, the United States was 70% of the fatalities not 20%. –

CAMEROTA: Mark, I’m so confused about this a analogy that you keep using. So there were 13,000 deaths by our numbers from the swine flu, there are now on your screen 211,000 deaths of Americans from coronavirus. Why do you keep going back to the swine flu? Coronavirus is so much more deadly and it’s the Trump administration’s watch.

SHORT: Sure. Sure. Sure, the coronavirus is more deadly, Alisyn, but it’s why the reality is that what the Biden administration — the Obama/Biden administration provided opportunities to close down borders to Mexico that they did not do when swine flu was coming across and the swine flu ended up infecting 60 million Americans. So, God forbid if the swine flu had been as fatal you would have ten times as many fatalities in the United States and it’s why the Chief of Staff to the Vice President said we did everything possible wrong in managing that situation. –

CAMEROTA: I heard that last night. I just wish that you guys –

SHORT: — and I want to show the contrast between the two administrations the way that they would have handled it.

CAMEROTA: Okay. Mark Short, thank you very much. We didn’t expect all of this breaking news, but we really appreciate you being here and giving us the White House perspective. Thank you.

SHORT: Thanks for letting me talk about the debate.