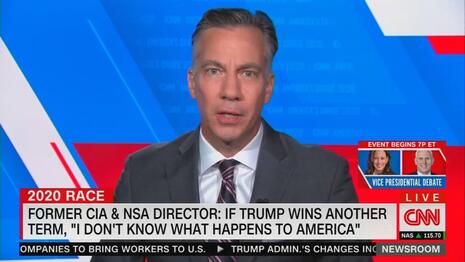 It seems that CNN will give air time to anyone who is willing to endorse Joe Biden and go on record trashing the President. Presidential endorsements are news and should be reported, but to devote a whole six-minute interview with an endorser to praising that candidate and not ask a single challenging question is just a joke.

Rather than press for details on how Hayden reached his decision, Sciutto lobbed softball questions meant to promote Joe Biden. At one point, Hayden declared: “I don’t think the President does think well at all. I’m very sad about that, but I think he can’t do another term. It would be very, very bad for America.” Sciutto eagerly asked for more: “You say in particular that Trump doesn’t care about facts, he didn’t care about the truth. Why is that important?”

For the most part, General Hayden gave vague answers to Sciutto’s leading questions that turned into attack lines. “In particular, you mention the danger to key U.S. Alliances. What happens to U.S. Alliances such as the NATO alliance in a second Trump term?,” Sciutto asked as he teed up the Biden surrogate once again. Hayden ranted: “If it’s a second term, I think we will be alone. We will not have any friends at all.”

CNN Newsroom put on a six-minute infomercial for the Democratic nominee. The one time Sciutto briefly alluded to policy differences Hayden has with the former Vice President, the host immediately pivoted to praising Biden’s character: “You mention in your video that you disagree with many of Joe Biden’s policies. But that in your view, this is a question of character. Tell us what you mean by that.” This perfectly matches a major talking point of the Biden campaign.

This is not the first time that the leftist media has touted out Biden endorsements. The likes of Anita Hill were brought out to discuss Trump’s Supreme Court picks. Connie Chung was given time on CBS for no reason than she was endorsing Biden. Atul Gawande was invited on ABC’s The View to endorse Biden and question the President’s health. On Tuesday, CNN Newsroom devoted a six and a half minute segment for Michelle Obama’s endorsement. This is just a few in a week and a half.

Prominent politicians and Americans have also endorsed President Donald Trump for reelection. On Tuesday evening, Governor of Puerto Rico Wanda Vazquez endorsed the President, but this was not even mentioned during the broadcast. It’s blatantly clear that the left-wing press are in the tank of the Democratic Party when Biden’s endorsements get so much air time and President Trump’s do not.

CNN once again puts its own partisan alignment ahead of its duty to report the news.

This DNC infomercial was sponsored by Ensure and Xyzal. Click on the links to let them know what you think.

A transcript of the October 7 coverage is included below:

JIM SCIUTTO: Welcome back. Strong words and a stark warning from retired general Michael Hayden. He is the former director of the CIA and NSA, having served under both Republican and democratic administrations. This morning he is throwing his support for President behind Joe Biden.

MIKE HAYDEN [Former Director of CIA]: I’m Mike Hayden. I was the former director of the CIA and the NSA. If there was another term for President Trump, I don’t know what happened to America. Truth is really important, but especially in intelligence. President Trump doesn’t care about facts.

SCIUTTO: We’re fortunate to be joined now by retired general Michael Hayden. General Hayden, thank you very much for joining us this morning.

SCIUTTO: General, you served more than 40 years in military and intelligence. You served both Democratic and Republican Presidents. Tell us why you have chosen to speak out now, and why you believe President Donald Trump doesn’t keep this country safe, as you say.

HAYDEN: Yes, indeed. You know, I watched it very closely, and now I’m afraid that I don’t think the President does think well at all. I’m very sad about that, but I think he can’t do another term. It would be very, very bad for America.

HAYDEN: It’s very important. You know, with intelligence, things are hard. Sometimes we’re right and sometimes we’re wrong, but we are doing things to do something about it. But Trump doesn’t do that. He, for example, talking to the Russians, he doesn’t do the things Presidents should actually do. So what I was saying in my second book before my throat, I said, “Truth, what is truth with that man”? And I think it’s not truth at all.

SCIUTTO: Did his unwillingness to warn away Russia, whether it be on bounties on U.S. Soldiers or interference in the election or the poisoning of the Russian opposition leader, does that in your view give Russia green light?

HAYDEN: It does, okay. Now, look, I know people involved in American intelligence. They’re really good people and they’re trying to do the right thing. But if the government — if the President doesn’t want to do that, it’s very hard for them to do that. And I have watched it now for three or four years, and I think the President won’t want to do that at all. I’m really, really sad about that. By the way, if he’s elected a second time, I think what American intelligence and a lot more will be gone.

SCIUTTO: Will be gone. It’s a remarkable assessment given your experience here. In particular, you mention the danger to key U.S. Alliances. What happens to U.S. Alliances such as the NATO alliance in a second Trump term?

HAYDEN: Yes, indeed. I think, you know, for 10, 20, 30, 40 years I was with them and I talked with our friends in Korea and in Europe and so on, okay, and I talk with them now. People would say what’s going on? I thought this was America. But now I’m not sure. If it’s a second term, I think we will be alone. We will not have any friends at all.

HAYDEN: Yes, indeed. You know, our friends are our friends but now I’m not sure at all. Again, in a second term, I think it will be very, very bad.

SCIUTTO: You mention in your video that you disagree with many of Joe Biden’s policies.

SCIUTTO: But that in your view, this is a question of character. Tell us what you mean by that.

HAYDEN: Absolutely. You know, I like the vice President, okay, but some of the things I would say, oh, I don’t think so and so on and we will disagree with him. And if he’s President, I will say I like this one but I don’t like that one. But Mr. Trump, he’s really — I don’t know what’s going on with our people, you know. It’s really sad for me to say that. Policies will come and go. That’s okay. But this is very, very different.

SCIUTTO:  General Hayden, thank you for your service to this country, and thank you today for your candor.