CNN: Trump Will Use ‘Violent Extremists’ to ‘Disrupt the Elections!’ 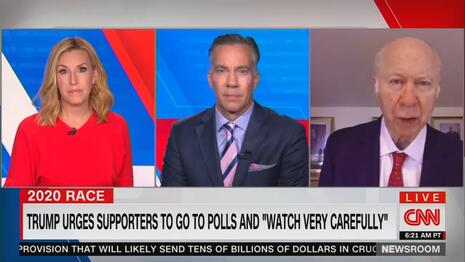 Appearing on CNN’s New Day on Thursday, unhinged left-wing commentator Errol Louis was given free reign to fabricate wild claims that President Trump was sending a clear signal to violent extremists, militia-type organizations” and telling them “That he does want them, in fact, to go out and help disrupt the elections.” Not only was there no challenge of the false smear, the cable network has actually been actively pushing such hysteria.

The left-wing press continues to fantasize that Trump is sending some kind of coded message to his voters to commit violence. If one looks honestly at the transcripts from last night’s press gaggle or the transcripts from the debate, there is no mention of having supporters rise up and disrupt the election. This does not stop the network that has repeatedly read into the President’s comments and divined calls for violence.

This was made in response to the President’s encouragement to his supporters to go out to the polls and watch the election to ensure its fairness. It should be noted that this is a common practice for both political parties. In fact, 45 states have laws allowing for poll watchers. States, like Virginia even allow for open campaigning outside of precincts. Both parties regularly participate in these activities.

There was nothing in the President’s words meant to incite violence, just a request to go out and ensure a fair election. The anchors during these segments completely refused to fact-check their irresponsible guests by citing Press Secretary McEnany’s repeated statements that “the President would accept the results of a fair and free election.”

This media fearmongering is not about ensuring election integrity, but merely about boosting accusations made by the DNC and the Biden campaign to attack the President.

This attack from the media was sponsored by Liberty Mutual and Lexus. Click on the links to let them know what you think.

POPPY HARLOW: David Gergen is with us, our senior political analyst, senior adviser to Nixon, Ford, Reagan and Clinton. David, having served in all of those administrations, I wonder if you agree with Tom Friedman who writes this morning, I cannot say it any more clearly. Our democracy is in more danger than it has been since the civil war. When extremists go all the way and moderates just go away, the system can break and it will break. And it will break Is he right?

DAVID GERGEN [CNN Senior Political Analyst]: I think Tom Friedman is absolutely right and I will tell you that there are many, many other people of Tom Friedman’s intellectual stature who agree with him. Put it this way, the fear that one walks are from — last night’s debacle is that on election day we’ll have troops on the streets allegedly there to protect the system, but really they’re there to intimidate voters and have them stay home. And in similar ways we’ll have people from the right wing coming out there and heckling people who are standing in line, trying to drive them away. And it’s going — it could make a mess of election day and delegitimize it as the president has been arguing. But from the right instead of the left.

JIM SCIUTTO: David Gergen, tell us how the two things are connected. The callout to supporters to quote/unquote watch the polls along with again the president’s deliberate attack on the legitimacy of the election last night citing a whole host of things to weren’t true when we have heard, for instance, from the director of the FBI that there’s no evidence of widespread fraud. Tell us how the two things are conducted. The attack on the legitimacy with the poll watchers, with frankly lawsuits, right, that are trying to keep ballots from being counted.

GERGEN: Well, I think it’s the same thing we saw last night in the debate is the president likes to create chaos. But in a chaotic situation, he can navigate in it and achieve his goals without being clearly seen in the dust, in the dustup. I think he’s going to try to do that on election day unless we’re awfully, awfully lucky. I think we came away last night aghast and agog at what we saw and it suggested to us that there’s no question that he is going to do whatever it takes to cling to power and that may well be, you know, trying to do everything disruptive between now and election day, calling out attention to all of the — and inevitably with millions of ballots there will be a few that are going to be tampered with or whatever. But the vast majority — the vast, vast, vast majority this is a fair system and the right thing to do in the pandemic. If you didn’t have a sense of the president’s irresponsibility before the debate, you got a load of it last night.

BERMAN: Any form of any of that. Not I condemn white supremacy. It’s like the fonz in “Happy Days” couldn’t say I’m sorry. President Trump couldn’t get the w in white supremacy. That’s what that sounds like. Joining us now, Anna Palmer, she is senior Washington correspondent, and CNN commentator Errol Lewis, he’s a political anchor at spectrum news and host of the podcast you decide. Errol, on top of that, the President said he’s always condemned that but he didn’t condemn that Tuesday night when given the opportunity in front of 70 million people and here we are again this morning. So what does it mean?

ERROL LEWIS [CNN Political Commentator]: Yeah. Well, what it means is that the President is saying the quiet part out loud. He’s sending a clear signal to violent extremists, militia-type organizations which are publicly rejoicing, that clearly get the message. He’s letting them know that he’s not going to step away from them. That he does want them, in fact, to go out and help disrupt the elections apparently is what he’s aiming at. And we’ve gone through this charade with the President of the United States over and over and over again. We went through it at Charlottesville a couple of years ago. We’re going through it again. It’s tragic that a President of the United States can’t simply open his mouth and insist on upholding the constitution, the law, the values that it overwhelming number of Americans support just in order to disrupt the elections. Not to win the elections. But to make a mess of it because he’s losing.

ALISYN CAMEROTA: Anna, the President claimed yesterday he doesn’t know who the proud boys are, which is possible. We know he doesn’t read and intellectual curiosity is not his middle name. But that would mean, if that were true, that his national security team is not briefing him on that, not telling him that, choosing not to which sometimes, as you know, they do spare him information that they think will upset him. Do we know why he wouldn’t know that?

ANNA PALMER [Senior Washington Correspondent, Politico]: I think it’s unclear why he might not know it. It’s also — this is clearly a 24-plus hours. He could certainly Google it. He uses Twitter. Oftentimes when he steps in hot water and doesn’t denounce groups like this or whether it’s qanon and others he often says he doesn’t know or the present hasn’t been briefed on it. I think it’s a little hard to say that. I do think it’s really putting Republicans on Capitol Hill up for re-election in a bad spot. They have, you know, condemned lightly but they don’t really want to attack the President because they don’t want to face the ire of him or his supporters, but I do think this is going to be an issue for Republicans. He just needs to say it’s a very simple sentence. I denounce white supremacy and he’s refused to do that so far and it’s hard to see him do that in the next 30 some days before the election.

JOHN BERMAN: I want to start, though, with the national security crisis in the country right now. CNN national political reporter Maeve Reston joins us and Myles Taylor served as former chief of staff at the department of homeland security for President Trump and David Sanger’s writing, the most direct threat comes from the President of the United States himself. It’s almost as if the intelligence community could put out an official bulletin warning right now. Obviously they won’t. But if you were still working there and this kind of thing could happen, what would be the warning you would issue to the American people?

MILES TAYLOR [CNN Contributor]: Well, it’s really difficult right now. In fact, John, he’s put these departments and agencies in an impossible position because these departments and agencies are prepared to fight threats from outside the United States. But they can’t fight threats from within, especially when the threat is their own boss. I’ve got to say, I would echo David Sanger’s words that the President of the United States has really fulfilled our adversary’s dreams by engaging in this rhetoric. So I think it’s an enormous challenge. I’m not sure what type of bulletin they could issue, what they need to be doing is speaking truth to power and convincing the President to change his rhetoric.

ALISYN CAMEROTA: Maeve, President Trump sometimes says exactly what he means. And we should listen. And what he keeps saying basically over and over is that he will not accept the election results if he loses. He will fight it in the courts. He will not concede. He will claim that there was some sort of voter fraud or mail-in ballot problem. He’s already doing that. He’s already priming the pump obviously for that, though all sorts of election officials everywhere coast to coast say, no, we’re not seeing any evidence of fraud. I mean, it’s happening in real-time.

MAEVE RESTON [CNN National Political Reporter]: It is happening in realtime. And he talks about it at every single rally, every single public appearance that he has. And all of that is in part to stir up the passions of his supporters, to get them ready for this enormous confrontation that he’s setting up in a couple of weeks here. And I think it’s really scary for the American people that you have the person who is in the highest office in the land stirring not only this kind of disinformation about the election and therefore trying to suppress the vote because people will think that voting by mail, for example, you know might be throwing their ballot away, even though that’s absolutely not true. But also, you know, by continually making these calls to his supporters to get out there and be poll watchers and to be, you know, have law enforcement officials at the polls. That is clearly the definition of voter intimidation, which is something that we’ve been trying to stamp out in this country for decades now.

BERMAN: He is literally calling for people to go to the polls. Which to watch, not to vote, go and monitor the situation. Go and stir things up. Miles, just to read one more sentence from David Sanger here, he says Mr. Trump’s unwillingness ability to say he will abide by the result and the disinformation campaign went beyond anything Vladimir Putin of Russia could have imagined. So if you are Vladimir Putin this morning watching this, what do you think?