CNN: Whatever Democrats Say About Voting, We’re for That 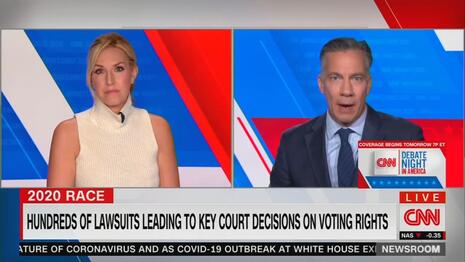 Regarding the issue of voting integrity, CNN seems more interested in backing up the Democratic Party’s position, rather than providing an unbiased point of view. This was evident on Tuesday’s Newsroom where Poppy Harlow and Jim Sciutto and John King all raised concern over the recent victories that the courts have given the Republican party in recent days. Sciutto stated: “We’re seeing efforts like this in states led by the Republican party with the potential for tremendous impact on this election.”

The leftist network have ridiculed the President’s statements on election security and have called them dangerous. There have been a litany of times CNN has claimed that there is no threat to the election and that mail-in ballots are perfectly safe and an efficient way to vote. The only time they seem to believe in dangers to the election is when it goes against the Democratic Party.

As noted by CNN, there have been several victories for the Republican Party in the courts in recent weeks. CNN National Correspondent Kristen Holmes showcased their thoughts on this:

“It’s not entirely surprising that Democrats are starting to face an uphill battle after early victories. You have to keep in mind what we’ve seen in the courts in the last four years. President Trump and Senate Republicans have confirmed more than 200 judges. Many of them sitting on appeals courts. That’s what you’re starting to see now.”

The court rulings in South Carolina, Texas, and Ohio have nothing to do with the law, CNN claims, just that the Republicans have put their judges in the right courts.

Later in the broadcast, John King followed the talking points stating “the Trump campaign and Republicans are challenging state efforts to make it easier.” This continues the blatant policy bias that has been showcased on CNN. A report released by the Heritage Foundation showcases that the issue is not nearly as black and white as CNN is making it out to be. Neither Harlow, nor Sciutto, nor King made any effort to discuss the other sides point of view.

They are even willing to go against themselves if it advances the interests of the DNC. During an interview with Ohio Secretary of State Frank LaRose, King reversed positions on mail in voting: “Some don’t trust the mail. There’s a national controversy about the postal service and about delays. The statistics tell you that right now, first class mail is way behind schedule, behind the norms, behind the goals, in many places around the country.” This in response to the Republican policy of having ballot drop boxes only at Board of Election offices.

CNN’s policy position on this issue is only what Joe Biden and the Democrats tell them.

This Democratic propaganda was brought to you by Nutrisystem and CarShield. Click on the links to let them know what you think.

A transcript of the October 6 coverage is included below:

POPPY HARLOW: Welcome back. A CNN survey finds that more than 3 million ballots have already been cast nationwide in this election with less than a month till election day. Take a look at this. This is a live look out of Cleveland from our affiliate WEWS there. The first day of early in-person voting in Ohio and Indiana is today and people are eager to vote. The lines are long and the come as courts continue to weigh in on voting and ballots.

JIM SCIUTTO: Federal courts in Ohio sided with the Republican secretary of state allowing him to mandate that counties install ballot dropboxes only at the county board of election office which limits them to one location in each county. We saw something similar in Texas earlier this week and the Supreme Court reinstated a south Carolina law requiring ballots to have witness’ signatures. That’s new and different. Kristen Homes is with us for more. We’re seeing efforts like this in states led by the Republican party with the potential for tremendous impact on this election. Bring us up to date.

KRISTEN HOLMES [CNN National Correspondent]: Good morning. It’s extraordinary to think these cases are still happening when people are actually voting. Some of these laws could change. It’s not entirely surprising that Democrats are starting to face an uphill battle after early victories. You have to keep in mind what we’ve seen in the courts in the last four years. President Trump and Senate Republicans have confirmed more than 200 judges. Many of them sitting on appeals courts. That’s what you’re starting to see now. Let’s start in South Carolina, Democrats had argued this witness law was dangerous in the time of pandemic and that eventually it would lead to a burden on the right to vote. The Supreme Court said, no, mostly. What that means is that they will allow anyone who voted with those ballots coming in within two days of the ruling to still not have a witness. But you have to remember, 8,000 people in South Carolina have already voted. So it’s unclear how many ballots that is going to affect. Take a look at Georgia. This was a federal appeals court. This was a blocking of a lower court ruling that would have allowed Georgia to continue to count absentee ballots for three days after the election as long as they were postmarked on election day, obviously no longer. And then look at Texas, as you said we saw the dropboxes earlier in the week. There have been quite a few cases in Texas and this is the idea of straight ticket voting. Which is that idea of voting for one party or another. Democrats tried to overrule a Republican ban trying to get momentum with Joe Biden’s popularity there. No. Again, blocked. I want to say one thing, which is voters need to pay attention in their own state to their own laws because they’re different everywhere and we are getting very close to the election.

HARLOW: Very close. 28 days. Thank you for this reporting. And thanks to all of you for being with us today we’ll see you tomorrow morning.

JOHN KING: A busy week for early and mail-in voting as more states kick pandemic voting plans into action. That also means it’s a busy time in the courts. Because the Trump campaign and Republicans are challenging state efforts to make it easier. The Supreme Court gave South Carolina Republicans a victory, the high court reinstated a requirement that mail in ballots must contain a witness signature. The court did make one concession. Any ballots already sent in without a witness should be counted. In Arizona, a federal judge now giving the state two-week voter registration extension, citing impact of covid-19. In his ruling, the judge in that case said ballot access is an extremely important right and it has been restricted during this unprecedented time. The ruling came down last night which was the original deadline to end registration. Early voting in Arizona gets under way tomorrow. Right now, take a look. Voters standing in long lines, live pictures waiting to cast a ballot in Ohio. More than 3 million general election ballots have been cast across the country. Today, absentee ballots will be sent in New Mexico and Ohio and early voting begins as you saw today in Ohio as well as in Indiana, and county clerk offices in New Mexico. The Ohio secretary of state Frank LaRose is with me. Thank you for joining us. You’re in the middle of a bit of a controversy now. You have decided there should be ballot drop boxes only at board of election sites across the state and League of Women voters in your state, and the Democratic Party are mad at you. They think it is a deliberate effort to make it harder for people to vote. This is what Ohio League of Women Voters says. It completely misses the point. We want multiple drop boxes across the county so anyone, regardless where they live can easily access a drop box for absentee applications and ballot. This still does little to improve accessibility for senior citizens, voters with disabilities, low income Ohioans and those who live in rural or exurban areas. Why do you think only at election sites?

Frank LaRose [Ohio Secretary of State]: Well, John, Ohioans know it is easy to absentee vote, they mail in ballots. If you want to bring it to board of elections, the law allows for that. We made it more convenient than ever, requiring every county board of elections to have a secure 24/7 drop box. But to expand beyond that when it is not specifically called for in the law, it would be irresponsible at this point and would cause confusion. The time to make changes to the Ohio election law is passed. Early voting has already begun in the Buckeye state.

KING: As you know, I’m going to push back. Some don’t trust the mail. There’s a national controversy about the postal service and about delays. The statistics tell you that right now, first class mail is way behind schedule, behind the norms, behind the goals, in many places around the country. So, people would say what’s the harm if we can put more drop boxes in places, especially in a state like yours with big cities and these rural stretched out areas. What’s the problem with it? I get, you say you’re operating within the law, why not though, why not make it easier for people to vote?

LaRose: Well, we want to make it easy to vote and it is easy to vote in Ohio. 93% of Ohioans responded to a recent poll that said it is easy to vote in the state of Ohio. Again, in Ohio absentee votes are routinely returned by mail. It is trustworthy, you can track the ballot by going to voteohio.gov, the official Secretary of State website and track your ballot to make sure it is received. In Ohio, ballots can be received up to ten days after election day, as long as postmarked by Monday, November 2nd. So, Ohioans know how to do this, noise and confusion created by last minute lawsuits is a disservice to voters.

KING: You say it is a disservice. In many other states, it’s the Republicans pushing lawsuits. I will let the courts set it out, not take sides. Let me just ask one more question about your experience there, in terms of the numbers of people. Around the country we’re seeing record shattering number is of people requesting absentee ballots or early voting. What is your sense of what’s happening in Ohio.

LaRose: Same thing here and we’re really excited about it. We have seen over 2 million absentee ballot requests already. That blows away anything we’ve seen in the past in 2016 or 2012, it was fewer than a million. We’re excited to see that. I mailed every registered voter an absentee ballot request we want to encourage people to vote this way. Of course, Election day is November 3rd. Election month has begun and Ohioans are voting as we speak in the 88 county boards of elections.

KING: The election is well under way. We say four weeks to election day, lot of people are casting early. Appreciate your time, sir.