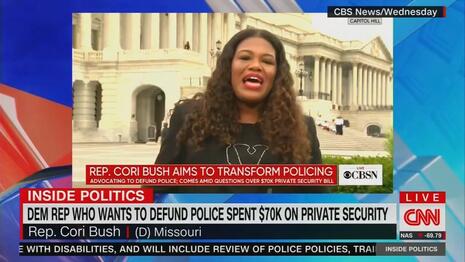 CNN’s Chris Cillizza is worried that Congresswoman Cori Bush has given a “gift” to the Republicans for the 2022 midterms. And that “gift” is her over-the-top hypocrisy of using expensive private security for herself while at the same time seeking to deny security for other people by defunding the police.

Here is Cillizza on CNN.com on Thursday pulling out his worry beads and rubbing them vigorously while worrying about Bush helping to lose Congressional seats for the Chris’s beloved Democrats (emphasis his) “Cori Bush just handed Republicans a 2022 gift.”

Her sit-in at the US Capitol to protest the lack of an extension of the eviction moratorium put public pressure on the Biden administration, forcing a reversal on the issue.

That win thrust her into the national spotlight. And something she said while in said spotlight is likely going to haunt her party next fall. In an interview with CBS on Thursday, she said this (bolding is mine) when asked about her use of private security:

“I’m going to make sure I have security because I know. I have had attempts on my life and I have too much work to do there, too many people that need help right now for me to allow that. So, if I end up spending $200,000, if I spend 10 more dollars on it — you know what? I get to be here to do the work. So suck it up and defunding the police has to happen, we need to defund the police and put that money into social safety nets.”

Setting aside the part of the quote where she explains her own personal need for security (which certainly got the attention of bad-faith critics on Twitter) it’s that last line –“defunding the police has to happen, we need to defund the police” — that has already been clipped by Republican campaign operatives and could pose a problem for Democrats in 2022.

It’s actually worse when you see Bush say it than merely read it.

Finally, Cillizza is really really worried that Bush said out loud  what Democrats are only supposed to say on the hush-hush so as not to harm their party politically:

Democrats have spent the last few months insisting that the dangers of “defund the police” movement are overblown because their party’s elected officials don’t even talk about it anymore — that the only people talking about it are Republicans.

Bush’s pronouncement on Thursday puts lie to that idea. And hands Republicans a clip that they can wedge into dozens of attack ads linking swing-district Democrats to a deeply unpopular policy coming out of the month of a Democratic member of Congress.