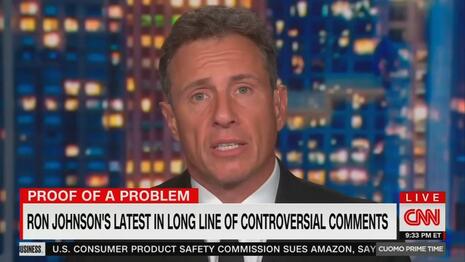 On his Thursday night show, CNN host Chris Cuomo attacked Sen. Ron Johnson (R-Wis.) as a “misinformation spreader” that’s “fearmongering about the border….I just don’t see any other way to say it other than the Party of Trump is banking on BS. Republican leadership doesn’t care about the threat of toxic talk.”

But it’s Cuomo’s argument that founders on the facts.

Without divulging the context that Senator Johnson was asking about non-citizens who were caught by Border Patrol crossing the  border illegally, Cuomo showed him asking asking Ed Gonzalez, nominee for ICE director, if it was wise to allow so many teenaged male illegal immigrants into the country and ship them to cities without even letting residents know they are arriving. Johnson posed:

JOHNSON: Wouldn’t you say a 15, 16, 17-year-old immigrant male fits the profile of someone who might be in a gang or would be recruited by a gang or be used by the drug traffickers to traffic their drugs, right? (editing jump) Isn’t that what the reality of the situation is, this flood? We are letting in people who are potentially gang members — we are letting in people who are going to be trafficking drugs or human trafficking. Isn’t that your experience as Houston’s sheriff?

After Gonzalez asserted that he is opposed to “profiling and developing these stereotypes,” Johnson, probably referring to racial profiling, denied that he was “profiling.” Let’s guess he was talking about violent gangs like MS-13, which CNN rarely admits is a problem. Violent gangs of illegal immigrants are just too….helpful to Trump’s side or the argument.

Cuomo reacted by implying Johnson smeared every teenager sneaking across the border:

It’s by definition profiling — taking what someone looks like and putting them into a category of criminality because of how they look. That’s profiling. Facts — immigrants who are undocumented are much less likely to commit a crime. Why? Because they’re scared of getting detected by the system and thrown out.

Briefly displayed on screen were the results of a study by CATO from a few years ago which concluded that illegal immigrants commit crimes at a lower rate than do natural-born American citizens, which NewsBusters has previously pointed out is flawed because it blurs illegal border crossers with those who overstay visas.

Cuomo then brought up a recent report by the U.S. Sentencing Commission finding that 80 percent of those arrested for drug trafficking were U.S. citizens. With the report results displayed on screen, Cuomo asserted: “The vast majority of them are U.S. citizens.”

Cuomo then portrayed Senator Johnson as a danger to national security:

By now, we’re passed fact-checking what comes out of Ron Johnson’s mouth because so much of it constitutes a domestic threat. You know what those other 49 Republican Senators swore to defend against? That. You want proof? Just name the danger. According to DHS under Trump, there were spikes in domestic threats driven by people stoking fears about immigration — in other words, what Johnson just did.

This episode of CNN’s Cuomo Prime Time was sponsored in part by Thereabody. Their contact information is linked.