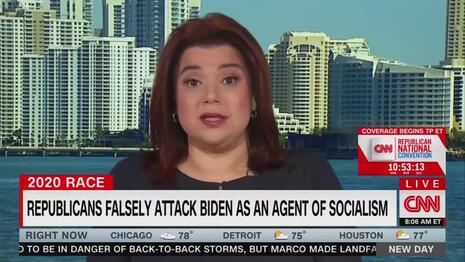 CNN really can’t stand the Democrat’s radical agenda being exposed, that’s why they go out of their way to defend Joe Biden and Kamala Harris as moderates, constantly. On New Day Tuesday, the panel bristled at RNC speaker Maximo Alvarez’s speech last night warning that the Democrat ticket’s promises reminded him of the communism his family had fled from. But his powerful and emotional speech earned the ire of the secretly socialism-loving network.

Co-host John Berman started off the 8:00am EST hour sneering at Republicans’“dark, divisive version of America, especially should President Trump lose.” Maybe someone needs to remind Berman just last week his network was oohing and ahhing over President Obama fretting Trump winning would mean the end of democracy. But that wasn’t dark and divisive?

Berman went on to highlight Alvarez’s “extreme” comments, while the defensive CNN chyron read, “Republicans falsely attack Biden as an agent of Socialism.”

“One of the examples of pushing to the extremes was Alvarez, a Cuban, and somebody very active in Florida politics who said if Trump loses, there will be a socialist takeover of the United States,” Berman said before playing a very brief clip where Alvarez said the Democrat promises reminded him of Fidel Castro.

CNN political commentator and Biden adviser Ana Navarro then reacted to Alvarez’s speech. At first she touted it as effective:

NAVARRO: Look, I thought it was — I thought it was very powerful because it was very personal, he was very emotional, he was tearing up. It’s a message I can tell you that resonates where I am  in South Florida. It’s a group, Cuban-Americans, Nicaraguan Americans that Donald Trump has targeted from day one. Has come here many times to drive home this message and this message of vote for Democrat X, Y or Z and they will turn Florida into Venezuela or they will turn America into Cuba is something that Republicans have been hammering on for years down here and it works. There’s a lot of people who like me fled Communism, fled Socialism and we are — we have an emotional trauma with that if I can explain it that way. It is not rational. It is emotional. There are fears because we lived it. And Maximo Alvarez I think spoke to these people.

However, she went on to basically call it abusive as well as “crazy” because there’s not “a socialist or communist bone in Joe Biden or Kamala Harris:

There are–I think It’s not a well-founded fear. I think it’s crazy. I don’t think there’s a socialist or a communist bone in Joe Biden or Kamala Harris. That being said, it works. It is a message of fear and division and angst and causing distress and nervousness and exploiting the trauma. Playing with the emotions of people who have lived it in their own skin, it works. So for me I thought it was a very effective part because I know it’s effective down here in South Florida.

Anyone who can say this while working for CNN needs to take a hard look in the mirror because all CNN does day in and day out is exploit people’s fears and make up conspiracy theories, particularly in their coronavirus coverage.

The hypocrisy continued later on New Day, as John Berman brought on John Dean to complain, for six whole minutes, about Republicans using a message of “fear” to keep Trump’s “low-educated” “followers” “in line.” Oh yes, he was also there to tout his anti-Trump book called “Authoritarian Nightmare.” Dean warned Americans must vote out Trump or “authoritarians will prevail.”

CNN’s selective outrage was paid for by its sponsor, USAA. You can contact them here.