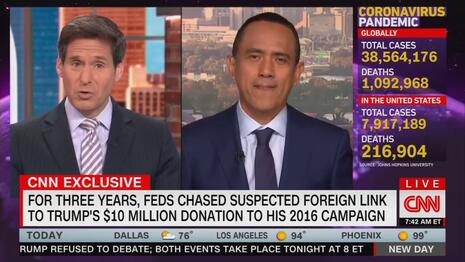 At this point, it is common for CNN and other leftist media outlets to censor anything that could be damaging to the Democratic nominee Joe Biden. This was showcased during Tuesday’s New Day broadcast where co-host John Berman completely ignored the explosive allegations against Joe Biden in favor of two claims against President Trump. Not once were the allegations against Biden brought up. Instead, the network focused on two minor attacks against the President that they could not present proof on.

The first allegation was that President Trump was aided by an Egyptian bank to finance the last few weeks of his 2016 Presidential campaign. Berman did note that: “Ultimately, the Mueller team was not able to obtain all the information it wanted nor could the U.S. Attorney in D.C. who continued the investigation, until this year, and decided not to pursue charges.” Despite noting there was no evidence found or charges made, Berman continued to push for more damaging information on the President.

His guest, Evan Perez, addressed why there was so little information: “The decision went to the then U.S. Attorney Jesse Lou, who after weeks of poring over the records decided to reject the subpoena request.” Despite these facts, CNN felt it was worth spending more time on than the allegations on Joe Biden.

Later on in the broadcast, Berman brought up the second allegation from a recent New York Times report which alleges that the President warned his big donors while telling falsehoods to the Republican donors. Senator Sheldon Whitehouse, who was a guest on the show, brazenly declared: “In effect the public was being lied to directly by the President while big Republican donors were being given the straight scoop.” Nothing was discussed backing up this claim made by the Times. Berman did not mention this or push his guest for further information.

It is telling that CNN felt the need to focus on these allegations rather than the news of Biden. The ideals of honest journalism dictate that the allegations of both parties should have been discussed, or none at all. This is especially considering that at first glance, the allegations against Joe Biden are much more concrete. The New York Post story was released on Monday morning and detailed emails retrieved from Hunter Biden’s abandoned laptop how he sold access to his father when the latter was Vice-President. The Post noted that later Joe Biden pushed for the removal of a Ukraine investigator who was looking into the company his son was working for.

On Tuesday morning, a second story was released that showcased Hunter doing the same thing with a Chinese company. These allegations have huge implications for both the 2020 Presidential campaign as well as a potential Biden White House. Instead, CNN is attempting to cover it up while highlighting anything that could damage President Trump.

This CNN bias was sponsored by AT&T and Liberty Mutual. Click on the links to let them know what you think.

A transcript of the October 15th Coverage is included below. Click “expand” to read more.

JOHN BERMAN: This morning, a CNN exclusive. So CNN has learned that federal prosecutors, including special counsel Robert Mueller spent more than three years investigating whether money flowing through an Egyptian state-owned bank could have backed millions of dollars that Donald Trump donated to his own 2016 campaign. Ultimately, the Mueller team was not able to obtain all the information it wanted nor could the U.S. Attorney in D.C. who continued the investigation, until this year, and decided not to pursue charges. Senior justice correspondent Evan Perez joins us now. Evan, you were part of the team that broke this story and there’s a lot in here that’s so interesting that just wasn’t publicly known.

EVAN PEREZ [CNN Senior Justice Correspondent]: That’s right. This investigation was conducted with the utmost secrecy given the sensitivity. It started soon after Trump won the presidency in 2016 and it continued until this summer and has never been described before publicly. We spoke to more than a dozen sources familiar with the effort. In addition to what we learned in newly released court documents and hints in public records. Two of the sources told CNN that FBI investigators first became interested in the case after intelligence, including from an informant suggested that Trump’s last-minute $10 million injection into his campaign, less than two weeks before the 2016 election could have been backed by money that came from overseas, through an Egyptian state-owned bank. Now, it’s not clear that investigators ever had concrete proof of a relevant bank transfer, but multiple sources told us that there was sufficient evidence to justify seeking a subpoena in court and to keep the investigation open, even after the Mueller investigation ended. Now, this investigation of a potential campaign finance law violation began with the FBI and the U.S. Attorney here in Washington, before special counsel Robert Mueller took it over. And it was largely conducted by Mueller’s team of investigators. And when Mueller was done, the investigation continued. It was handed back to the U.S. Attorney here in Washington, who soon afterwards told a court that it was still a robust probe, but they felt that they never got the records that they needed from the Egyptian bank and it was just this summer that the case was closed with no charges. Among the chief questions that prosecutors were trying to answer but never did was whether Donald Trump was supported by or indebted to a foreign power. Special Counsel Robert Mueller had no comment for the story and a senior adviser to the 2020 Trump campaign, Jason Miller, told CNN, quote, the President has never received a penny from Egypt, John.

BERMAN: So was there ever any kind of discussion to try to get to the bottom of this by issuing a subpoena for the President’s own financial records?

PEREZ: Yeah. Multiple sources tell us last year federal prosecutors in Washington pushed for getting the President’s financial records. The decision went to the then U.S. Attorney Jesse Lou, who after weeks of poring over the records decided to reject the subpoena request. Sources tell us that Lou decided that there was not enough evidence to meet the standard for a subpoena. Interestingly, she did not close the case. As for the Justice Department, here’s what a senior Justice official told CNN in response to this reporting. Quote, the case was first looked at by the special investigators who failed to bring a case and then it looked at by the U.S. Attorney’s office and career prosecutors in the national security section who also were unable to bring a case. Based upon the recommendations of both the FBI and those career prosecutors. Michael Sherwin, the acting U.S. Attorney, formally closed the case in July.

BERMAN: So obviously, the special counsel’s office was known for keeping all of their threads under wraps, but there was never anything close to a leak about this, even after the case was closed. How did they go about keeping the secret?

PEREZ: Well the Egyptian investigation was never actually mentioned in the report. It was listed among 11 cases that Mueller transferred to other prosecutors when his investigation ended, but that entry was redacted. The only public indication was a secretive court proceeding over a subpoena that Mueller’s team issue to an unnamed foreign company for records. Neither the company nor the details of what prosecutors were looking for was ever publicly disclosed. But CNN is told that it was a fight with a state-owned Egyptian bank. A spokesman for the Egyptian President didn’t comment when we reached out to them.

BERMAN: And obviously, this investigation continued under the Barr Justice Department. Did prosecutors explain why?

PEREZ: Yeah, you know, we know that they told the court that the investigation was continuing robustly, and quote, very much a live issue. We know about the consideration of a subpoena under Jesse Lou, but that’s about it until it was closed. The fact of the matter is that the case was closed without getting an answer to their question.

BERMAN: This does fill in a lot of holes and provides new perspective, including one of the more mysterious episodes and a whole floor of a court house was down at once.

JOHN BERMAN: Developing overnight, a new report in the “New York Times” reveals what White House economic advisers were privately telling Republican donors in the early days of the pandemic, while at the same time publicly down playing the pandemic to the American people. This is what the “Times” reports, quote, the President’s aides appeared to be giving wealthy party donors an early warning of a potentially impactful contagion at a time when Mr. Trump was publicly insisting that the threat was nonexistent. Elite traders had access to information from the administration that helped them gain financial advantage during a chaotic three days when global markets were teetering. Joining us now is Democratic Senator Sheldon Whitehouse, he is a member of the Judiciary Committee who has been involved in Supreme Court confirmation hearings. Senator Whitehouse, first on this story from “The New York Times,” a lot of your focus overall has been about the intersection of money and politics. Here is the White House reportedly saying something differently publicly than what economic advisers are saying behind closed doors. Your take?

SHELDON WHITEHOUSE [R-RI]: Absolutely. Every voter in America needs to understand that while President Trump was telling all of us that they had the coronavirus under control, his administration was meeting secretly with big investors and letting them know that it was much worse. In effect the public was being lied to directly by the President while big Republican donors were being given the straight scoop. If that’s not enough to get people to the voting booth, I don’t know what is.

BERMAN: Any thought of investigating this? What should be the ramifications?

WHITEHOUSE: Well, I think there’s going to be some looking into this, but not on the senate side because on the Senate side the gavels are all controlled by Republicans who don’t dare cross with Trump on anything, never have, they just roll over for the Trump administration every single time. I call it the spines of foam moment for the Republican Party.