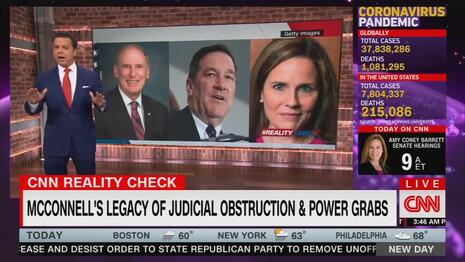 Since the death of Justice Ginsburg and the nomination of Amy Coney Barrett, leftist networks and Democrats have tried a plethora of attacks to stop or block the nomination. Democratic nominee Joe Biden has called the process ‘unconstitutional’ and ‘distorting democracy’. During the Senate confirmation hearing, his vice presidential nominee, Senator Kamala Harris, decried it as an illegitimate process. On Tuesday’s New Day, John Avlon continued the Democrat attacks by claiming “Judge Amy Coney Barrett is sitting in a stolen appellate court seat right now.”

Avlon regularly appears on the show to give “reality checks” which are nothing more than partisan attacks on Republicans and the President. Tuesday’s segment was no different as Avlon directed ire on Republican Senate Majority Leader Mitch McConnell. He smugly opened the segment with this: “18 days till Halloween. I wanted to kick off with something a little scary.” He then showed a clip from December 13, 2019 of McConnell laughing while talking about why President Trump had so many judicial nominees left over from the Obama administration.

The leftist commentator wildly accused Republicans of making “an unprecedented power grab.” That the only reason Judge Barrett was on the Seventh Circuit was because McConnell unfairly blocked President Obama’s nominee in 2015-2016. Avlon griped: “Judge Barrett is rated well qualified by the American Bar Association, the highest rating, and that matters. The problem is the process. It has been corrupted by obstruction, situational ethics and trust that the judiciary is dropping along partisan lines.”

This continues the attack from the left, generated by the Democratic Party, to ignore Barrett’s qualifications and focus on the policies and the process. During the course of his tirade, Avlon distorted the facts and established procedures to highlight his point. Article 2 Section 2 has always given the Senate the right to approve or deny nominees. If President Obama could not get the votes for his nominees in the Senate, that does not make the process unfair.

Avlon made the claim that none of President Obama’s nominees made it through in the 114th Congress. However, a study from the liberal-leaning Brookings Institute highlighted that 20 judges appointed by President Obama were confirmed by the Senate. He also claimed that “only 68 presidential nominees ever blocked before Obama took office.” But the same study showed 68 presidential nominees alone were rejected during President Reagan’s final two years.

This attack, and several others like it, had nothing to do with reporting the news or bringing to light important facts, but advancing the cause of the Democratic Party. Rather than practice honest journalism, CNN took the time to smear Senate Republicans and attempt to disrupt the process.

This CNN bias was sponsored by Febreze and Tractor Supply Co. Click on the links to let them know what you think.

A transcript of the October 13th Coverage is included below:

JOHN BERMAN: So, Alisyn was making fun of my homemade graphics. In 46 states and Washington, D.C., there are zero days until election day.

ALISYN CAMEROTA: That’s a good one.

BERMAN: Zero days until election day. Voting is now. 21 days until it’s over. Three weeks from today. With that in mind, why is senate majority leader Mitch McConnell laughing? John Avlon with a reality check.

JOHN AVLON: Hey guys, three weeks until the election day and 18 days till Halloween. I wanted to kick off with something a little scary.

SEAN HANNITY [Fox New Host]: And I will give you full credit for that and, by the way, take a bow that was a good one.

AVLON: Yeah. It’s important to understand, though, just why Mitch McConnell is laughing that way. Because if you want to find a real rigged system with stolen seats, don’t listen to Donald Trump about the election. Instead, look at our judicial nominations and how they’ve become hijacked by hyper partisans. With the Supreme Court nomination getting jammed through the Senate along partisan lines less than three weeks from election day, it’s an unprecedented power grab.

MIKE PENCE: We hope she gets a fair hearing.

AVLON: Of course that’s exactly what President Obama’s nominee Garland was denied. But Republican senators assured us that this was the new election year standard. That was a lie. So when Mitch McConnell complained about the Democratic playbook of double standards, broken promises and raw power, he was engaging in some primo projection. Judge Amy Coney Barrett is sitting in a stolen appellate court seat right now. That’s right. Obama’s nominee, Myra Sellby, was the first woman and first African-American to serve on the Indiana Supreme Court. She was denied a Senate vote that’s because Republican Senator from Indiana Dan Coats blocked it. In contrast, Joe Donnelly granted a vote to Amy Coney Barrett when she was nominated by Trump. Now when Trump got into office, there were 103 court vacancies. How did that happen?

MITCH MCCONNELL [R-KY]: I’ll tell you why, I was in charge of what we did the last two years of the Obama administration.

AVLON: Translation. Those seats were open because of obstruction, pure and simple. Get this. There were only 68 presidential nominees ever blocked before Obama took office, and 79 during Obama’s first five years in office up to November 2013. That’s right. There were more nominations blocked in by Republicans than had occurred up to that point in our country’s history. That’s when Democratic Senator Harry Reid decided to go nuclear and remove filibuster 60 vote requirement to fill lower court vacancies. McConnell swore revenge and none of President Obama’s seven lower court nominees got through in his last two years got through the Republican-led Senate. Now compare that with 17 circuit judges approved for Reagan in his last two years with the democratic senate, 16 for Clinton, ten for George W. Bush. Judge Barrett is rated well qualified by the American Bar Association, the highest rating, and that matters. The problem is the process. It has been corrupted by obstruction, situational ethics and trust that the judiciary is dropping along partisan lines. We’ve gone from near unanimous confirmations for Justices as different as Scalia and Ginsburg, to bitter party line votes with Brett Kavanaugh getting the narrowest margin in history. The fundamental issue is not just fairness, but representative majority rule. Because Republicans have lost the popular vote in all but one of the last seven presidential elections, but they’re on track to seat five of the last seven Supreme Court justices. Based on the support of GOP senators whose states represent less than half the American people. So, that’s why Mitch McConnell is laughing.

HANNITY: I — and I will give you full credit for that and by the way, take a bow, that was a good one.

AVLON: And that’s your reality check.

BERMAN: It’s something. It really is. Important history there in context. Appreciate it.