They don’t routinely mock President Biden on The Late Show with Stephen Colbert. They’re often too busy continuing their obsession with Trump or mocking Facebook as “Pinsurrection.” But on Tuesday night’s edition, they discussed crushing democratic norms….for the Democrats.

Charlamagne (real name: Lenard McKelvey) came on to discuss his new Comedy Central show on Friday nights (executive-produced by Colbert) called Tha God’s Honest Truth. They discussed the first few weekly episodes, and what’s next. He promised: “Next on the agenda is what we’re calling the cowardly donkeys. Which is the cowardice of the Democratic Party.”

This might disturb the Biden establishment types (even in Hollywood). Colbert worried out loud:

COLBERT: What should they be doing that they’re not?

CHARLAMAGNE: Well, I feel like if. you know, they don’t stop being, you know,  cowards, I think that, you know, we’re really, really looking at the death of democracy as we know it. Like, I mean, four simple things, you  know– (Applause ) Four simple things the Biden administration could do to protect democracy:

Number one, you gotta protect voting rights, right? ( Applause ) You just simply got to.

Number two, you have to pack the Supreme Court, right?

Number three, you have to end the filibuster so you can govern!  Right. ( Applause )

And number four, you have to make an example out of the people who attempted a coup this country on January 6. (Wild cheers and applause). 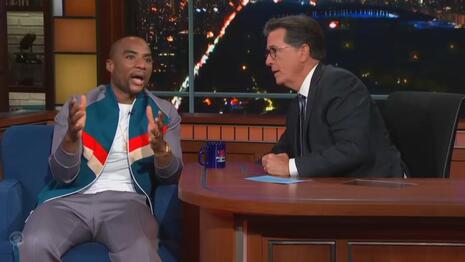 The (unintentional) comedy portion of the interview was when Charlamagne said we don’t talk about January 6 enough! (Does he WATCH cable news?)

CHARLAMAGNE: It bums me out that we treat January 6 like it was just a  bunch of kids wilding in Miami for spring break. Like, there was an attempted coup of this country. And it’s like we just don’t even talk about it enough. That should be the headline every night on every news network, every late-night show all the time.

Colbert mentioned as they were taping the show in the late afternoon that the “special” January 6 committee was going to take up contempt proceedings against Trump adviser Steve Bannon. So they talked about the Republicans are “lawless” and “gangsters” and causing a “knife fight.” (No “fact checkers” will object, even if there’s Honest Truth in his show title.)

CHARLAMAGNE: People, you know,  think Hillary Clinton is crazy – right? — because she lost, and they think she’s just bitter. A couple of weeks ago she was saying how, you know, we’re headed towards minority rule. And that’s why she’s in support of ending the filibuster so we can govern. Because she was like, you know,  the G.O.P. Is lawless and they don’t care about rules. They’re gangsters. When you’re dealing with gangsters, you have to do gangster things.

COLBERT: You can’t bring a spoon to a knife fight.

CHARLAMAGNE: You can’t bring a spoon to a knife fight, exactly.

I thought the point was to avoid further violence and lawlessness on Capitol Hill? Perhaps nonviolent and lawful metaphors are a more promising step.

This discussion of court-packing and filibuster-crushing was brought to you by Tide and Tums.