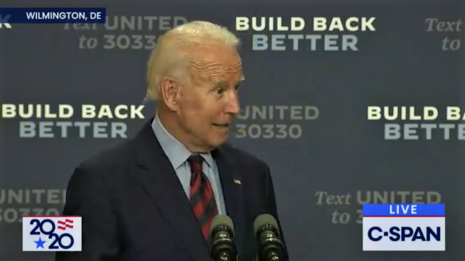 Why is Joe Biden always putting a “lid” on his campaign? If you’re not familiar with the press lingo, a “lid” is a note to your press pool that you plan no further public events on your schedule. Biden tends to put a “lid” on it at 9 or 10 in the morning, saying his press corps has nothing to cover.

On September 23, they called a “lid” at 9:30 am – the ninth time they’ve done it this month. Is it due to never-ending debate prep? Biden denied that, saying he’s just getting ready to prepare.

Since March, Biden has barely done any campaigning, trying to make a virtue out of the fact that he’s not going anywhere or saying much of anything during the coronavirus pandemic. Biden’s staff would claim that while Trump endangers his voters by having rallies, their candidate is leading by example.

Guess what? The liberal media, those energetic watchdogs who bombastically claim to keep democracy from “dying in darkness,” don’t care one whit. I popped into the Nexis search engine to find out how many times Brian Stelter’s Army at CNN has raged against Biden’s “lid.” In the last month, there are two scripts that contain the words “Biden” and “lid.” Neither was about a Biden story.

One was CNN’s White House shrieker Jim Acosta still obsessing over the Lafayette Square protesters cleared out on June 1 so President Trump could strike a pose in front of St. John’s Episcopal Church. Apparently, someone in the military wanted to use a heat-ray device on protesters, but it was never used. How this non-starter is “news” is anyone’s guess.

Acosta used the L-word as he told Don Lemon: “ I don’t think this is the last we’ve heard from this whistleblower. He is, I mean, he is doing something patriotic here, Don. He is blowing the lid off of our government using what are some pretty ridiculous tactics, harsh and un-American tactics on our fellow citizens.”

Actually, no — these tactics were not used.

ABC, CBS, NBC, PBS?  Is there something wrong with the search engine? These networks all send cage fighters into the Trump and McEnany briefings, but they’re docile little lambs on the Lid.

The Washington Post? No stories with “Biden” and “lid,” and media specialists like Erik Wemple and Paul Farhi haven’t touched it. USA Today had nothing.

What about NPR? Nope, media reporter David Folkenflik was napping like a Biden, although one weekend anchor promised “breaking news on the canning lid shortage.”

The New York Times? “Biden” and “lid” drew no stories. At least Mark Leibovich of the Times reported something on September 22, describing Biden’s “tightly restricted bubble,” that his “pandemic-era campaign appearances can resemble the pandemic-era N.F.L. — quiet, eerie and almost entirely fan-free.” He noted pro-Trump protesters hold signs saying “Hidin’ Biden.” But the story was loaded with Biden fans supporting his er, restraint.

It’s not like Biden’s press corps is known for asking him the rough questions. On September 23, he traveled to North Carolina, and reporters asked him softballs like “What gives you the sense that you can win?”

Let’s bet that if Biden loses, all this extremely cooperative behavior will be upended. The media will complain that Biden was a bad candidate who didn’t campaign and venture outside the bubble enough. As usual, they’ll assign exactly zero blame to their own pusillanimous silence.