The political party conventions keep slowly receding from their place in the national spotlight, especially with these virtual, genuine-imitation conventions. The audiences (and air times) seem to shrink every four years, and most people who tune in are the most committed partisans, not the most independent and persuadable voters. But one long-standing trend in media bias persistently remains: the description of tone.

The Trump team came out of the Democrat convention insisting the tone was very dark and divisive. Biden blatantly associated Trump with the darkness, and allied himself with “the light,” almost implying that Trump was Satan and he was climbing the stairway to Heaven.

But NBC’s Savannah Guthrie swooned that the “deeply optimistic,” “hopeful,” and “intimate” Biden address “took on the tone at the end of almost a preacher at the pulpit.” MSNBC’s Joy Reid also heard a preacher’s Sunday sermon. CBS contributor Maria Elena Salinas said it was “ better than what many of us expected” because he could “show that empathy, show that hope, give people that hope.”

When Biden said character and compassion and decency were on the ballot, he was strongly suggesting Trump lacks all of those. But the journalists gushed this was the best Biden speech ever. No one would discuss the seamier side of the Bidens, because that would ruin the echo. 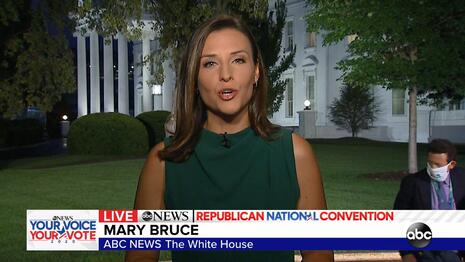 Then the media launched into the Republican convention warning that it would be four days of pounding the drums of doom and gloom. ABC’s Mary Bruce insisted President Trump’s speech on Monday accepting the nomination was “full of grievances” and painted “a fairly apocalyptic picture on what will happen if he’s not re-elected.” In the evening, NBC’s Chuck Todd warned this was “not quite my definition of upbeat and optimistic.”

When you’re a Democrat, hearing that the Democrats will ruin the economy, surrender the globe to China, and let urban violence boil over, it can’t possibly sound upbeat. When you’re a Republican, you’ve heard that democracy is pretty much canceled if Trump’s re-elected. You’ve heard the networks spend the last five years being very dark and divisive about how Donald Trump was Hitler, or a Russian agent, or a dangerously stupid child. But that was apparently just telling “the truth.”

But this biased measurement of tone has been a consistent pattern for decades. Back in 1992, Newsweek’s Joe Klein trashed George H.W. Bush’s convention. “The Republican Party reached an unimaginably slouchy, and brazen, and constant, level of mendacity last week,” he wrote. Bush was “in campaign mode now, which means mendacity doesn’t matter, aggression is all and wall-to-wall ugly is the order of battle for the duration.”

In every Republican convention we’ve recorded and watched at the Media Research Center over the years, no matter how conservative the candidate was, the anchors and pundits have scorned the GOP as ultraconservative, too hostile to women and minorities, too mired in scandal, and far too negative in attacking the Democrats.

Every Democratic gathering, by contrast, has painted the Democrats as soothingly centrist, free of ethical problems, and stuffed with “inspirational” speeches attacking the Republicans as – you guessed it – ultraconservative, racist, and sexist. The GOP was always shrinking to a “smaller, older, whiter and more male party.”

This is why more and more people like watching the conventions (and other campaign events) on C-SPAN or live streams, where they can tune all out of those Democrats who contribute to the cause at the office, implausibly posing as nonpartisan journalists