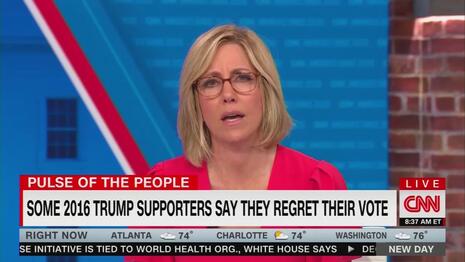 CNN New Day co-host Alisyn Camerota revealed even more of how much CNN hates conservatives during part two of the voter panel discussion that she began on Tuesday’s show. Just like on the first part of the interview that aired yesterday, Camerota refused to fact-check the Joe Biden supporters’ statements but was combative and hostile to the Donald Trump supporters on the panel.

After asking each panelist to identify who they will be voting for, she asked the three Biden supporters, who claim they voted for Trump in 2016, to explain why they switched:

How did President Trump lose your vote?

…What do you think of the President’s response to COVID?

After each Biden supporter was allowed to complain uninterrupted about Trump’s handling of the coronavirus, Camerota asked one Trump supporter to respond. But as the pro-Trump panelist brought up the new CDC report, which she said found only a “fraction” of counted COVID deaths were strictly from the virus, Camerota immediately cut in to fact-check her:

“What the CDC said was that 6 percent of the people who died from COVID also had co-morbidities such as diabetes but they’d still be here today if they hadn’t gotten COVID,” Camerota lectured.

Another Trump voter pointed out President Trump was taking actions to stop travel into the United States back in January and February, when Democrats were spending all their time on impeachment instead of preparing for the virus.

Again Camerota cut in to contradict her:

They did prepare a pandemic playbook that they — that the Department of Homeland Security under President Obama handed over to the Trump administration. They had a pandemic office which President Trump shut down so they said they did try to prepare the incoming administration!

It’s worth noting that NONE of the pro-Biden panelists got fact-checks from Camerota, same as yesterday.

She asked another anti-Trump question:

“At the moment, President Trump — according to the latest polls is not doing well with women. I think he has something like a 33% of all women — approval rating of 65% disapproval rate. What are your thoughts on that?” she asked.

Again, as one Trump voter tried to make her case that the RNC was diverse but the DNC was just the anti-Trump show and nothing else, Camerota wouldn’t let her finish her complete thought before pushing back: “Wasn’t the DNC also? I mean wasn’t the DNC showing diversity also?”

In fact, Camerota saved only one “critical” question for the pro-Biden panelists, and it wasn’t asking them about why they supported Biden or how they could support him despite his controversies. She asked if the Republican Convention had given them “second thoughts” about voting again for Trump, which of course the answer was a resounding, no.

As we’ve written about before on NewsBusters, CNN’s Camerota often uses these voter panels to bully conservatives and push forward Democrat talking points.