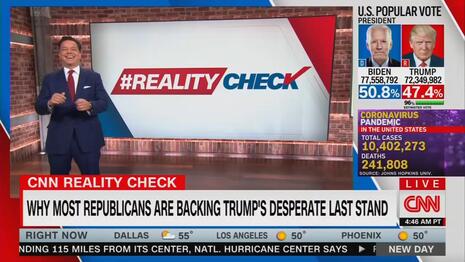 Once again on CNN’s New Day, the partisan network indulged in its favorite pastime on Thursday by lashing out at President Trump. Rather than giving a sober and thought-out presentation, co-host John Berman and the ever-condescending John Avlon childishly mocked Trump and anyone who dared to not support Joe Biden. During Avlon’s regularly-scheduled and smug lecture, he slammed Trump for not conceding and nearly all Republicans for “coddling him.” After Avlon’s decree, Berman compared the President to a children’s cartoon: “But there is someone who has superhero powers that does, in fact, wear a diaper. That may or may not be related.”

This does not seem like something that should be heard on a serious news network, yet here we are. This was not the first time that the DNC media ignored their past and instead has called on Trump to concede. It’s not like they highly contested the 2000 election or still haven’t accepted the results of the 2016 election.

Neither point stopped Avlon from trashing the Republicans and their response: “More world leaders have congratulated President-Elect Biden than Senate Republicans. But even as they put party over country, Republicans have their rationalizations.”

Is this like the Democrats when they put party over country with Democratic candidate Al Gore waiting until the legal challenges were over to concede? There did not seem to be calls denouncing the Democrats or calls that they were putting democracy in danger by the media then. In fact, a Pew Research Study showed that people felt the media was learning towards the Democrats even back then.

Avlon griped: “It’s not a surprise that President Trump would refuse to concede defeat. But it is a surprise that so many Republicans are enabling his autocratic impulses after the election.”

He also called on the Republican Party to end this: “Republicans should stop making excuses that enable his desperate delusions. Because it makes our democracy look even more divided and dysfunctional than it really is.”

For a network that gave life to the Steele dossier and tried to remove the President from office, it’s incredibly difficult to take anything this network does. If the four-year war against Trump was an insufficient indication, how about their continued attempts to delegitimize the election through the spreading of Russia allegations?

CNN’s continued critique of the Republican Party would play better if not for their past biased coverage. They have ignored past facts in favor of their own feelings on the matter. Seeing as how John Avlon quoted Ben Shapiro’s famous line “facts don’t care about your feelings,” that in of itself is a lesson CNN could learn from.

This CNN bias was sponsored by Consumer Cellular and Sandals Hotels and Resorts. Click on the links to let them know what you think.

A transcript of the November 12th Coverage is included below:

JOHN BERMAN: Moments ago you heard independent Senator Angus king that Republican silence in the face of President Trump obstructing transition is putting America at risk. So why are they doing it? John Avlon here with a reality check.

AVLON: It’s not a surprise that President Trump would refuse to concede defeat. But it is a surprise that so many Republicans are enabling his autocratic impulses after the election. Look, to date, only four GOP Senators have recognized Joe Biden’s victory while 49 are essentially backing Trump’s evidence-free accusations about voter fraud. Or to put it another way, more world leaders have congratulated President-Elect Biden than Senate Republicans. But even as they put party over country, Republicans have their rationalizations. Quote, what’s the downside for humoring him a little bit, for this little bit of time, one senior Republican official told “The Washington Post.” No one seriously thinks the results will change. Now, this approach argues that coddling Trump while he trashes the U.S. Electoral system will help him get over his loss, explains Trump’s former national security adviser, John Bolton. This is absurd. We shouldn’t have to explain to a self-proclaimed law and order candidate that this isn’t a negotiation, it’s an election. He lost. And as we’ve been told many times by Trump fans, facts don’t care about your feelings. But some argue that coddling Trump’s delusions of victory will help Republicans secure his support in January’s pivotal Georgia Senate runoffs. There’s no question Trump can motivate his base, but he’s deeply unpopular in suburban battlegrounds, and he did worse than many down-ballot Republicans nationwide. Regardless, the electoral college will confirm the Presidential results on December 14th. Three weeks before the Georgia runoff. So, another explanation for why Republicans are so silent about Trump’s outbursts, like his recent purge of Pentagon top brass, is that the Senate is packed with Presidential hop hopefuls that want Trump’s support from his base. Take Ted Cruz as an example. Back in 2016, after Cruz beat him in the Iowa caucus, Trump cried about, you guessed it, voter fraud, tweeting that a new election should take place and or Cruz’s results nullified. Cruz called this a temper tantrum at the time.

TED CRUZ [R-TX]: I believe Trump still has a path to victory [Spliced Clip] There are serious allegations of violations of law.

AVLON: To be clear, the evidence or serious violations of law is about as thin as Trump’s accusation that Ted Cruz’s dad helped kill JFK. But the most convincing explanation for this political hostage drama we’re all living through is simply that Republicans are still afraid of Donald Trump. They’re afraid of his tweets, they’re afraid of his base. And so they’re afraid to acknowledge the reality of this election in public. Listen to what Democratic Senator Chris Coons says about the calls he gets from GOP colleagues.

CHRIS COON [D-DE]: Yeah, I mean, they call me to say, you know, congratulations, please convey my well wishes to the President-Elect. But I can’t say that publicly yet.

AVLON: This is pathetic. Donald Trump cannot simultaneously have super human political strength and still need to be coddled like a petulant child. He’s just a lame-duck President who lost a free and fair election by more than 5.2 million popular votes. And so Republicans should stop making excuses that enable his desperate delusions. Because it makes our democracy look even more divided and dysfunctional than it really is. And that’s your reality check.

BERMAN: You know, there might be an answer. I don’t know if you remember this, the idea of having superhuman powers and still needing to be coddled. There was a Saturday morning cartoon called the mighty heroes and there was a superhero called diaper man. There was! You guys can go look it up.

AVLON: This is a deep cut for me. I like it!

BERMAN: There was diaper man, strong man, rope man. But there is someone who has superhero powers that does, in fact, wear a diaper. That may or may not be related. Thank you, John, that was terrific.