Those ignorant working-class Republicans are just too dumb to realize they should be voting for us!

That, in a nutshell, is a key Democrat kvetch when it comes to economics. Put in somewhat more academic terms, Democrats like to say that working-class Americans are “voting against their economic interests.” The notion was made famous by leftist author Thomas Frank in his book, What’s the Matter with Kansas? And the complaint has been echoed countless times since by a parade of progressives.

Anyone who subscribes to such a theory is, by definition, a supporter of liberal economics. Someone who believe that what is in the “interest” of average Americans are higher taxes, stricter government regulations, more government programs to “help” people, etc.

Enter Joe Scarborough. The former Republican congressman from the Florida Panhandle loves to boast that he is a “small-government conservative.” Indeed, he repeated the claim on today’s Morning Joe.

And yet . . . Scarborough today also parroted that same classic leftist trope. It came in his Washington Post column that his wife Mika Brzezinski read from at length this morning. Here it is [emphasis added, and note that the final sentence is Scarborough writing in his own words, not quoting the professor]:

“As Vanderbilt history professor Jefferson Cowie wrote in The New York Times in May, “The new class war would be waged not against the old corporate robber barons but the impudent snobs of the cultural elite.” That shift may explain why so many working-class Americans have been voting against their own economic interests for so long.” 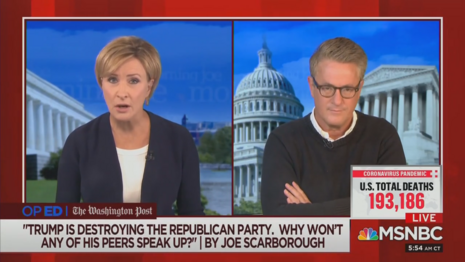 So there you have it. Supposed “small-government conservative” Scarborough has shown himself to be a fraud. He in fact subscribes to what you might call Bidenomics. In the Biden/Scarborough view, working Americans voting for small-government Republicans are suckers.

Will Scarborough have the decency, and honesty, to quit calling himself a conservative? Don’t count on it.

The real proof would come if Scarborough’s fondest wish were fulfilled, and President Trump defeated for re-election. At the point, would Scarborough revert to his supposed pre-Trumpian conservatism, and begin criticizing Biden and the liberal policies that he and his gaggle would seek to impose? Or would Scarborough remain a defender of all things, and politicians, liberal?

Scarborough subscribing to the notion that working Americans who support Republicans are voting “against their economic interests” was sponsored in part by Fidelity, Discover, and Subway.

MIKA BRZEZINSKI: [The] so-called “Hard Hat riot” is a scene, Joe, that you focus in on in your latest column for The Washington Post. It’s titled, “Trump is destroying the Republican Party, Why won’t any of his peers speak up?”

And in it, you write this:

Perhaps no scene better dramatizes the turbulent political age that we have been passing through for half a century than the “Hard Hat Riot” of 1970. That violent showdown in lower Manhattan pitted antiwar protesters against enraged union members, who took umbrage at “long-haired hippies” they saw as desecrating the American flag. The chaotic event long ago passed into political folk lore for conservatives, helping to identify the moment when White working-class identity shifted from economic to cultural.

As Vanderbilt history professor Jefferson Cowie wrote in The New York Times in May, “The new class war would be waged not against the old corporate robber baronns but the impudent snobs of the cultural elite.” That shift may explain why so many working-class Americans have been voting against their own economic interests for so long.