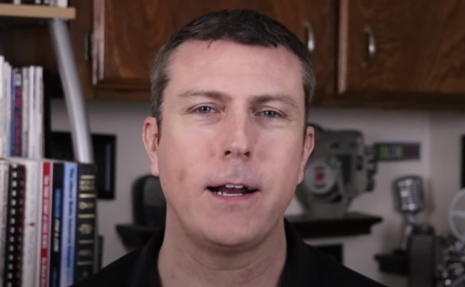 Titled, “Hollywood Propaganda: How TV, Movies, and Music Shape Our Culture,” Dice’s book takes a deep dive into how the left uses entertainment to shape the masses’ political views and alter Americans’ cultural norms to fit their agenda.

According to the book’s description on Amazon, Dice aims to explain that TV, movies and music “aren’t just entertainment” but “are powerful vehicles that influence social and political trends.” Of course, influential people in the industry know this and various lobbyists work behind the scenes to “harness these forces for their own aims or those of their clients.”

The description also stated “these Hollywood lobbyists have been instrumental in successfully paving the path for same-sex marriage to become legal, destigmatizing abortion, encouraging mass immigration, and sounding the alarm about climate change.”

Speaking of propagandizing same-sex marriage, groups like GLAAD, the Gay and Lesbian Alliance Against Defamation, use their industry influence to demand more LGBTQ representation in Hollywood movies and TV shows each year. Last year, the group called for 20% of all mainstream TV characters to be gay or LGBTQ by 2025.

It’s quite a heavy demand especially when only around 4% of the actual U.S. population is LGBTQ. But thanks to groups like GLAAD, Hollywood makes it seem like a much more prevalent lifestyle than it is.

In a Twitter video, Dice told his followers they could purchase his book through Amazon and other major Ebook stores. Though they won’t be able to find it through traditional stores, because Dice self-published Hollywood Propaganda.

In the clip, Dice mentioned that his latest work still applies to people who claim they “don’t follow politics.” He asserted, “The truth is pop culture is politics, and especially today it’s woven into the very fabric of it under the disguise of entertainment.”

Pop culture is “a tool and it’s being used against us,” the commentator added.

Dice reiterated that his book exposed various “social impact agencies” that lobby filmmakers to put “certain plot points and characters into their projects.” “This is why we’re hearing so much about diversity and the rainbow people,” the author claimed.

Dice has built a career targeting media bias and far left talking heads with his popular brand of comedic commentary. His work has such notoriety that Facebook even threatened to remove his Facebook page for hosting a video of the Kyle Rittenhouse incident: the incident where a 17 year-old boy shot and killed two rioters in Kenosha, Wisconsin.

Dice’s video aimed to poke holes in the media narrative that Rittenhouse is a white supremacist who killed peaceful protesters. He told the Media Research Center, “the post was going viral and had been shared almost 10,000 times and debunked the mainstream media’s false narrative that Kyle went to the protest to cause trouble. Quite the contrary.”