Cosmopolitan magazine’s July/August cover story says “Cara Delevingne ‘really’ wants to talk to you about sex toys.” Inside, a pull quote gushes “Cara is extremely, endearingly excited to TALK ABOUT VIBRATORS.” The British model is now a partner in a sex-toy business. It’s a perfect match for sex-obsessed Cosmo. 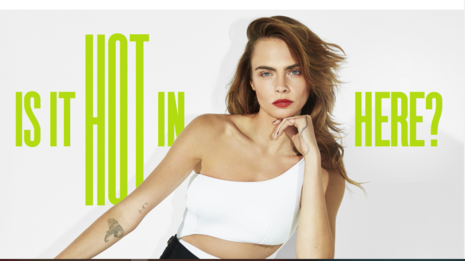 The last time Cara was in the news for a sex toy—yes, there was a last time—it was an all-caps Daily Mail headline announcing her purchase of a “SEX BENCH” with then-girlfriend Ashley Benson. The pictures of them carrying the SEX BENCH into their West Hollywood home lit up queer women’s group texts everywhere, including my own. There was something so joyful in watching two famous, beautiful women giggle as they schlepped sex equipment into their house.

What’s most interesting in this smutty piece is how she wants to be celebrated as “pansexual and gender-fluid,” but she doesn’t really want to be defined as anything, it’s just so confining:

It’s that complicated situationship Famous People Who Are Role Models have with said fame: Cara wants to be the aspirational representation she needed growing up, but that collides with wanting to be free of the smothering downsides of being a public figure. Take, for instance, when Cara came out as pansexual and gender-fluid a little over a year ago. It was because those were the best words available to describe who she is, she says, but that’s not to say the best-fitting words won’t change. “I just feel like such a fluid person, and if I ever say that I’m anything, it will just stick, which I don’t like,” she explains.

Poor Cara is so misunderstood by the press. “In the tabloids, Cara is something of a lesbian Lothario figure, willing and able to seduce every famous, beautiful woman she meets.” She says “It’s flattering, but it’s not true.” Tabloids exist to imagine the wildest things about someone you’re photographed next to…it’s something Britain’s top model should understand, even at her age.